Boiler rating is usually defined in term of steam output in kg/hr.

Question 3:Which among the following is the boiler mounting?

Question 4:When initially dry and saturated steam flows through a nozzle, the ratio of actual discharge to calculated discharge is

Question 5:Subsonic and supersonic diffusers have the following geometry.

Question 6:The isentropic heat drop in the nozzle of an impulse steam turbine with a nozzle efficiency 0.9, blade velocity ratio 0.5 and mean blade velocity 150 m/s in kJ/kg is

Question 7:In the Rankine cycle when superheated steam is used

Question 8:In a Rankine cycle heat is added

Question 9:In steam and other vapour cycle, the process of removing non-condensable is called

Question 11:For a given set of operating pressure limits of a Rankine cycle the highest efficiency occurs for

Question 12:A gas turbine cycle with infinitely large number of stages during compression and expansion leads to Question 17:The compression ratio of a gas power plant cycle corresponding to maximum work output for the given temperature limits of Tmin and Tmax will be 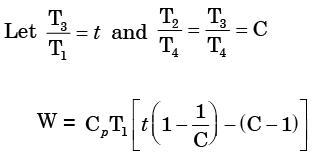 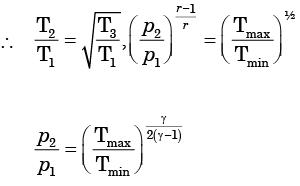 Question 18:Given below is an extract from steam tables.

In a regenerative the heat added in low temperature range is reduced which increase heat addition temperature.

Question 20:Determine the correctness or otherwise of the following Assertion (A) and the Reason (R).
Assertion (A) : Condenser is an essential equipment in a steam power plant.
Reason (R): For the same mass flow rate and the same pressure rise, a water pump requires substantially less power than a steam compressor.

Question 23:The values of enthalpy of steam at the inlet and outlet of a steam turbine in a Rankine cycle are 2800 kJ/kg and 1800 kJ/kg respectively.Neglecting pump work, the specific steam consumption in kg/kW hour is

Question 24:An ideal Brayton cycle, operating between the pressure limits of 1 bar and 6 bar, has minimum and maximum temperatures of 300 K and 1500 K. The ratio of specific heats of the working fluid is 1.4. The approximate final temperature in Kelvin at the end of the compression and expansion processes are respectively 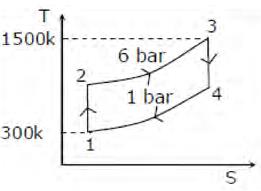 At the end of compression,
Temperature, T2 = T1

Question 25:In a power plant, water (density = 1000 kg/m3) is pumped from 80 kPa to 3 MPa. The pump has an isentropic efficiency of 0.85. Assuming that the temperature of the water remains the same, the specific work (in kJ/kg) supplied to the pump is

Question 26:The thermal efficiency of an ai r-standard Brayton cycle in terms of pressure ratio rp and y(= cp/cv) is given by

Question 28:The INCORRECT statement about regeneration in vapor power cycle is that

Question 29:Which one of the following modifications of the simple ideal Rankine cycle increases the thermal efficiency and reduces the moisture content of the steam at the turbine outlet?

Question 30:The current level of the maximum temperature of steam turbine inlet.is much lower than that at gas turbine inlet because

In gas turbine cooling is provided to blades which keeps the blade material at much lower temperature.

Question 31:For a single stage impulse turbine with rotor diameter of 2 m and a speed of 3000 rpm when the nozzle angle is 20°, the optimum velocity of steam in m/s is Question 34:If VN and α are the nozzle exit velocity and nozzle angle in an impulse turbine, the optimum blade velocity is given by

Question 35:A Curtis stage, Rateau stage and a 50% reaction stage in a steam turbine are examples of

Question 36:Which of the following is a pressure compounded turbine?

Question 37:The Rateau turbine belongs to the category of

Question 38:Considering the variation of static pressure and absolute velocity in an impulse steam turbine, across one row of moving blades

Question 39:In the velocity diagram shown below, u = blade velocity, C = absolute fluid velocity and W = relative velocity of fluid and the subscripts 1 and 2 refer to inlet and outlet. This diagram is for

Question 40:Specific enthalpy and velocity of steam at inlet and exit of a steam turbine, running under steady state, are as given below: