Question 2:Which one of the following pairs of equations describes an irreversible heat engine?

Question 3:An ideal gas of mass m and temperature T1 undergoes a reversible isothermal process from an initial pressure P1 to final pressure P2. The heat loss during the process is Q. The entropy change ΔS of the gas is

Question 4:One kilogram of water at room temperature is brought into contact with a high temperature thermal reservoir. The entropy change of the universe is

Question 5:If a closed system is undergoing an irreversible process, the entropy of the system

Question 6:A system undergoes a State change from 1 to 2. According to the second law of thermodynamics, for the process to be feasible, the entropy change, S2 – S1 of the system

Question 7:For an ideal gas the expression

is always equal to

Question 8:One kilomole of an ideal gas is throttled from an initial pressure of 0.5 MPa to 0.1 MPa. The initial temperature is 300 K. The entropy change of the universe is

Question 9:Which among the following relations is/are valid only for reversible process undergone by a pure substance?

Question 11:Consider a refrigerator and a heat pump working on the reversed Carnot cycle between the same temperature limits. Which of the following is correct? 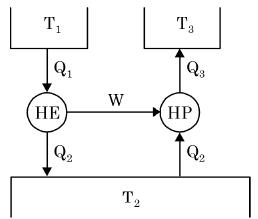 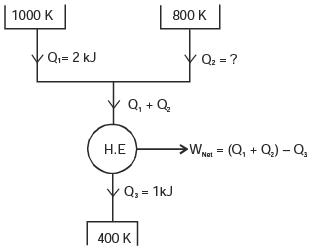 We know that for reversible heat engine, change in entropy is always zero
That is ΔS = 0

Hence process II is more irreversible than process I.

Question 15:An irreversible heat engine extracts heat from a high temperature source at a rate of 100 kW and rejects heat to a sink at a rate of 50 kW.The entire work output of the heat engine is used to drive a reversible heat pump operating between a set of independent isothermal heat reservoirs at 17°C and 75°C. The rate (in kW) at which the heat pump delivers heat to its high temperature sink is 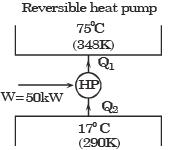 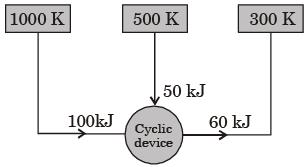 The cyclic device can be

Since heat is taken from the high temperature sources and rejected to low temperature sink, hence the device is a heat engine not heat pump.
Since, the temperature differences ar e negligible, the engine is reversible.

Question 17:A heat transformer is device that transfers a part of the heat, supplied to it at an intermediate temperature, to a high temperature reservoir while rejecting the remaining part to a low temperature heat sink.In such a heat transformer, 100 kJ of heat is supplied at 350 K. The maximum amount of heat in kJ that can be transferred to 400 K, when the rest is rejected to a heat sink at 300 K is 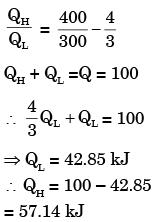 Question 18:A solar collector receiving solar radiation at the rate of 0.6 kW/m2 transforms it to the internal energy of a fluid at an overall efficiency of 50%. The fluid heated to 350 K is used to run a heat engine which rejects heat at 313 K.If the heat engine is to deliver 2.5 kW power, the minimum area of the solar collector required would be

Let A be minimum area of collector 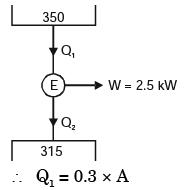 Question 19:A cycle heat engine does 50 kJ of work per cycle. If the efficiency of the heat engine is 75%. The heat rejected per cycle is 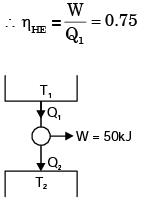 Question 21:A solar energy based heat engine which receives 80 kJ of heat at 100°C and rejects 70 kJ of heat to the ambient at 30°C is to be designed. The thermal efficiency of the heat engine is

Question 22:When a system executes an irreversible cycle

Question 24:A condenser of a refrigeration system rejects heat at a rate of 120 kW, while is compressor consumes a power of 30 kW. The coefficient of performance of the system would be