Since heat and work are energy in transit i.e. heat and work has meaning only when there is process. So both are boundary phenomena and are inexact i.e. path function.

Question 2:Heat and work are

Heat and work are path functions.
Since Q and W are dependent on path followed between two given end states of a thermodynamic process undergone by system.

Question 4:The specific heats of an ideal gas depend on its

Temperature C is the amount of heat required to increase the temperature of a substance by 1°C or 1K per kg.

Question 5:The definition of 1 K as per the internationally accepted temperature scale is

Question 6:An insulated rigid vessel contains a mixture of fuel and air. The mixture is ignited by a minute spark. The contents of the vessel experience

Question 7:During a non-flow thermodynamic process (1-2) executed by a perfect gas, the heat interaction is equal to the work interaction (Q12 = W12) when the process is

Question 8:The volume and temperature of air (assumed to be an ideal gas) in a closed vessel is 2.87 m3 and 300 K, respectively. The gauge pressure indicated by a manometer fitted to the wall of the vessel is 0.5 bar. If the gas constant of air is R = 287 J/kgK and the atmospheric pressure is 1 bar, the mass of air (in kg) in the vessel is

Question 10:If the specific heats of the working fluid are constant and the value of specific heat ratio γ is 1.4, the thermal efficiency (%) of the cycle is

Question 11:A thermodynamic cycle with an ideal gas as working fluid is shown below. 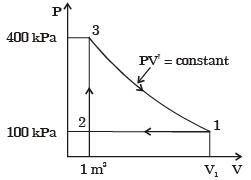 The above cycle is represented on T-s plane by

represented by a straight line on T – s plane. 1 – 2 is isobaric process, so with decreases of volume, temperature will also decrease.

Question 12:A reversible thermodynamic cycle containing only three processes and producing work is to be constructed. The constraints are :
(i) there must be one isothermal process,
(ii) there must be one isentropic process,
(iii) the maximum and minimum cycle pressures and the clearance volume are fixed, and
(iv) polytropic processes are not allowed. Then the number of possible cycles are

Question 13:The following four figures have been drawn to represent a fictitious thermodynamic cycle, on thep-v and T-s planes. 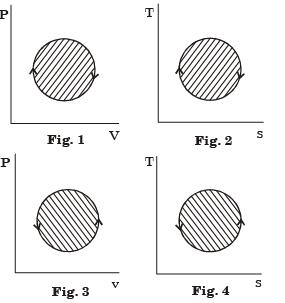 According to the first law of thermodynamics, equal areas are enclosed by

*Multiple options can be correct
Question 14:An isolated thermodynamic system executes a process. Choose the correct statement (s) from the following