Given in addition that the eccentric mass = 2 grams, eccentricity = 2.19 mm, mass of the mobile = 90 grams, g= 9.81 m/s2. Uniform speed of the motor in RPM for which the mobile will get just lifted off the ground at the end Q is approximately

Question 2:A circular solid disc of uniform thickness 20 mm, radius 200 mm and mass 20 kg, is used as a flywheel. If it rotates at 600 rpm, the kinetic energy of the flywheel, in Joules is

Question 3:A solid disk of radius r rolls without slipping on a horizontal floor with angular velocity ω and angular acceleration α. The magnitude of the acceleration of the point of contact on the disc is

Question 4:A circular disk of a radius R rolls without slipping at a velocity V. The magnitude of the velocity at point P (see figure) is: 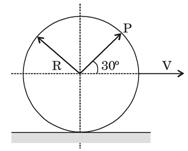 The instantaneous centre of rotation of the disk is 0, i.e. its point of contact with ground every other point on the disk is rotating with respect to this center with an angular velocity.
ω = v/R

Question 5:A rigid body shown in the fig. (a) has a mass of 10 kg. It rotates with a uniform angular velocity w. A balancing mass of 20 kg is attached as shown in fig. (b). The percentage increase in mass moment of inertia as a result of this addition is 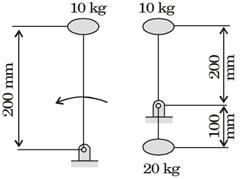 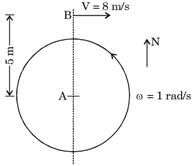 Question 7:A rod of length 1 m is sliding in a corner as shown in figure. At an instant when the rod makes an angle of 60 degrees with the horizontal plane, the velocity of point A on the rod is 1 m/s. The angular velocity of the rod at the instant is 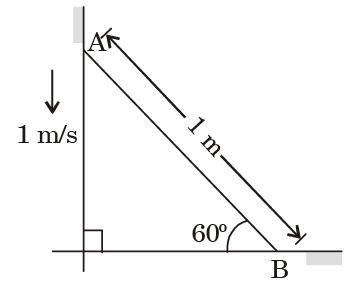 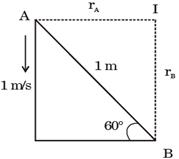 Question 8:A stone of mass m at the end of a string of length l is whirled in a vertical circle at a constant speed. The tension is the string will be maximum when the stone is

T1 > T2
Maximum tension will be maximum at the bottom

Question 9:The cylinder shown below rolls without slipping. Toward which of the following points is the acceleration of the point of contact on the cylinder directed? 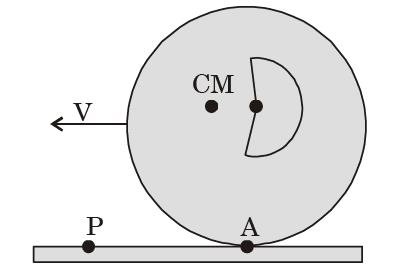 Acceleration of the point of contact A acts towardsgeometric centre.

Question 10:A and B are the end points of a diameter of a disc rolling along a straight line with a counter clockwise angular velocity as shown in figure. Referring to the velocity vectors

shown in the figure

Question 11:A uniform rigid rod of mass M and length L is hinged at one end as shown in the adjacent figure. A force P is applied at a distance of 2L/3 from the hinge so that the rod swings to the right. The horizontal reaction at the hinge is 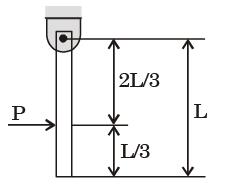 Question 12:A simple pendulum of length of 5 m, with a bob of mass 1 kg, is in simple harmonic motion. As it passes through its mean position, the bob has a speed of 5 m/s. The net force on the bob at the mean position is

The net force at the mean position will be zero.

Question 13:The time variation of the position of a particle in rectilinear motion is given by x = 2t3 + t2 + 2t. If v is the velocity and a is the acceleration of the particle in consistent units, the motion started with

Question 15:AB and CD are two uniform and identical bars of mass 10 kg each, as shown. The hinges at/A and B are frictionless. The assembly is released from rest and motion occurs in the vertical plane. At the instant that the hinge B passes the point B, the angle between the two bars will be

θ = 60° will remain same as weight mg of the rod CD passes through hinge point B so that there will be no torque in rod CD with respect to B.