The term "percentage" was adapted from the Latin word "per centum", which means "by the hundred". Percentages are fractions with 100 as the denominator. In other words, it is the relation between part and whole where the value of whole is always taken as 100.

Percentage is a fraction or a ratio in which the value of whole is always 100. For example, if Sam scored 30% marks in his math test, it means that he scored 30 marks out of 100. It is written as 30/100 in the fraction form and 30:100 in terms of ratio.Percentage Definition: Percentage is defined as a given part or amount in every hundred. It is a fraction with 100 as the denominator and is represented by the symbol "%".

Calculating percentage means to find the share of a whole, in terms of 100. There are two ways to find a percentage:

It should be noted that the second method for calculating percentage is not used in situations where the denominator is not a factor of 100. For such cases we use the unitary method.

How to get a Percentage?

Percent is another name for indicating hundredths. Thus, 1% is one-hundredth, that means 1%=1/100=0.01.Let's calculate percentage using the two methods given above.When we have two or more values that add up to 100, then the percentage of those individual values to the total value is that number itself. For example, Sally bought tiles of three different colors for her house. The details of the purchase are given in the following table. 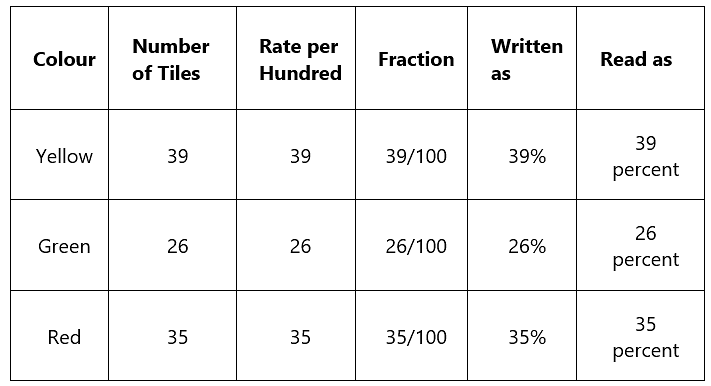 Since the total number of items adds up to 100, the percentages can be easily calculated.What if the total number of items do not add up to 100? In such cases, we convert the fractions to equivalent fractions with the denominator as 100. For example, Emma has a bracelet which is made up of 20 beads of two different colours, red and blue. Observe the following table which shows the percentage of red and blue beads out of the 20 beads. 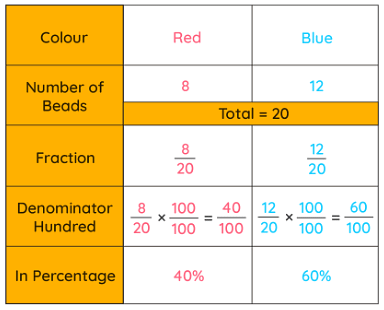 The percentage formula is used to find the share of a whole in terms of 100. Using this formula, you can represent a number as a fraction of 100. If you observe carefully, all the three ways to get percentage shown above can be easily calculated by using the formula given below:Percentage = (Value/Total Value) × 100

How to Calculate Percentage Increase?

How to Calculate Percentage Decrease?

Document Description: Percentage for JAMB 2023 is part of Mathematics for JAMB preparation. The notes and questions for Percentage have been prepared according to the JAMB exam syllabus. Information about Percentage covers topics like and Percentage Example, for JAMB 2023 Exam. Find important definitions, questions, notes, meanings, examples, exercises and tests below for Percentage.