The document Periodicity In Properties -1 - Periodic Properties Chemistry Notes | EduRev is a part of the Chemistry Course Inorganic Chemistry.
All you need of Chemistry at this link: Chemistry In a period (L → R) :  Atomic size decreases from left to right in a period.Looking to the E.C. of elements, following observations are made,

This results in net contraction of atomic size.In a group (up to down): Atomic size increases from top to down in a group.The electronic configuration of elements of the same group indicates that e-s are added in the new shell in the senior atom. i.e. a new shell is added in the next higher group.

An atom does not have any sharp boundary,

The atomic radii of atoms of compounds are classified as :

Variation in atomic radius in a group : 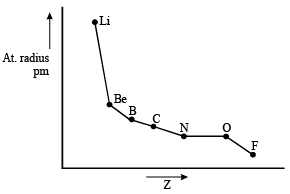 The distance between the nucleus and the outer most shell of an ion is known as ionic radii.

Ionisation Energy Amount of energy required to remove the most loosely bounded electron from an isolated gaseous atom.

(i) Size of Atom: Varies inversely

(v) Electronic Configuration (E.C.) : The atoms having stable E.C. have less tendency to lose es. So have high I.E.

General Trend Across the Period: L → R .Along period I.E. increases [with some exception] [Zeff In a Group :  Along a group I.E. decrease [Zeff constant, n (b) Increase in screening effect of electrons of inner shells also increase which nullify the increased Nuclear charge.