The document Phase Equilibria (Part - 1) - Thermodynamic and Statistical Physics, CSIR-NET Physical Sciences Physics Notes | EduRev is a part of the Physics Course Physics for IIT JAM, UGC - NET, CSIR NET.
All you need of Physics at this link: Physics

The only things we know are the criteria for equilibrium under certain conditions. That is, we know that

for a closed isolated system (that is, the entropy seeks a maximum), and

for a system as constant temperature and volume (that is,the Helmholtz free energy seeks a minimum), and

for a system at constant temperature and pressure (the Gibbs free energy seeks a minimum).

We will do a series of three thought experiments under different sets of conditions and use the above criteria to tell us things about the temperature, pressure, and chemical potential of a system of two phases in equilibrium.

I. A closed isolated system. 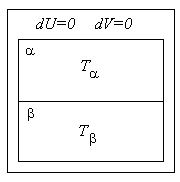 We do not know, yet, what is the relationship between Tα and Tβ. We do know that in this system entropy seeks a maximum. That is,

Let us transfer a small amount of heat, dq, reversibly from phase α to phase β . For definiteness we will set dq > 0. So

The total entropy change for the system is

Since dq is positive by construction we conclude that

If the system is not at equilibrium then

If the system is at equilibrium then

There is only one temperature defined and there in no need to distinguish between the temperatures of the two phases.