Phase space refers to the plotting of both a particle's momentum and position on a two dimensional graph. It also refers to the tracking of N particles in a 2N dimensional space. In many cases, the coordinates used are the canonical variables of Hamiltonian mechanics. If these canonical variables are used, the motion of particles in phase space exhibits properties that lead to important results in the field of thermodynamics and statistical mechanics.

How phase spaces are used

The most elementary phase space consists of a single particle confined to one dimensional motion, under the influence of a conservative force field. Such a system can be modeled using Hamiltonian methods. A suitable Hamiltonian is the total energy, expressed as a function of position, x, and momentum, p:

From w:Hamiltonian mechanics we have these equations of motion:

Figure 1b.  showing the motion in phase space for a pendulum. 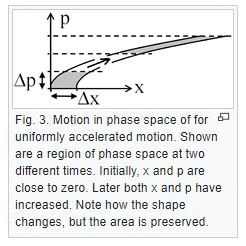 A collection of N non-interacting particles is also a microcanonical ensemble of individual particles. Three particles constrained to one dimension can often serve as a model for a single particle in the three spatial dimensions (xyz). For this reason, these 'particles' are often referred to as w:degrees of freedom(dof). Fig. 2. Evolution of an ensemble of classical systems in phase space(top). Each system consists of one massive particle in a one-dimensional potential well (red curve, lower figure). The initially compact ensemble becomes swirled up over time.

If the potential is constant

The figures to the right depict this motion by showing the region occupied in phase space at time, t=0, and at some time later. Figure 3 depicts the phase space of a particle that experiences a constant force. The initial configuration fills a region of phase space that includes a particle at rest at the origin (lower left corner of the shaded shape. This initial region includes a small initial displacement (up to approximately Δx) as well as a small initial momentum (up to approximately Δp). As time evolves, these particles, initially near the origin and nearly at rest, will accelerate. The second grey shape of Figure 3 shows these particles at a later instant in time.

Figure 4 illustrates how weak interactions might cause the shape in phase space to randomize. The behavior shown in the figure is more a schematic that representative of typical cases. There is probably no such thing as 'typical' behavior associated with complicated systems. But if the system is described by Hamiltonian equations, then the area is conserved if the phase space has only two dimensions. In higher dimensions, the volume (more properly called hypervolume) is preserved if the system is Hamiltonian. 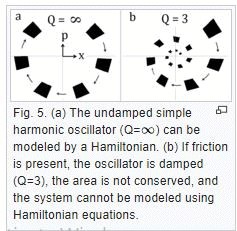 Whether or not friction exists has profound effects on how a system is modeled. Figure 5a shows the undamped simple harmonic oscillator, which is described by the Hamiltonian

It is interesting ponder the following two facts about Figures 5a and 5b:

Both perpetual motion machines are considered impossible to achieve.

The density of states in an ensemble of many identical states with different initial conditions is constant along every trajectory in phase space.

It states that if one constructs an ensemble of paths, the probability density along the trajectory remains constant. To prove this we use the generalized Stokes' Theorem to equate the n-dimensional volume integral of the divergence of a vector field J over a region U to the (n-1)-dimensional surface integral of J over the boundary of U:

Apply this divergence theorem to a 2N dimensional hypercube of length, L, with one corner at the origin. The volume inside this hypercube are the inequalities, 0<xn<L, where xnrepresent the q variables and the p variables.

where j represents the coordinate or momentum variable that is on the boundary, (i.e. equal to either 0 or L). In other words,

is the rate at which particles leave the hypersphere. (We take the sign convention from the well known case of continuity of charge or particles in three dimensions) Taking the limit that the length, L, of the hypercube vanishes, we have the 2N dimensional continuity equation,

The partial derivative reflects the fact that the hypercube remains stationary and does not move with the flow of particles in phase space. The divergence of the flow can be calculated as follows:

The second term on the LHS vanishes because our variables obey Hamilton's equations of motion:

The other term is a convective term of the form

Liouville's equation is a statement about for the derivative of density in the reference frame of the points moving through phase space:

Never in the proof have we demanded that

must vanish. Liouville's theorem is true even if the Hamiltonian is time dependent.

An alternative proof of Liouville's theorem is based on the time evolution of a volume element.

What Liouville's theorem does NOT imply