A solid solution is a uniform mixture of two crystalline solids that share a common crystal lattice. Solid solutions often consist of two or more types of atoms or molecules that share a crystal lattice, as in certain metal alloys. Solvent is the element or compound that is present in the greatest amount. Solute is used to denote an element or compound present in a minor concentration. The solute may incorporate into the solvent crystal lattice substitutionally, by replacing a solvent particle in the lattice, or interstitially, by fitting into the space between solvent particles. Both of these types of solid solution affect the properties of the material by distorting the crystal lattice and disrupting the physical and electrical homogeneity of the solvent material.

System in which two components form a stable compound

There are other type of systems in which component (metals, organics compounds at inorganic salts) enter into chemical combination giving rise to one or more compounds.Such type of two-compounds system are of two kinds:

“A compound is said to have a congruent melting point when it melts sharply at a constant temperature into a liquid of the same compositions as that of solid form from which it is derived.” The temperature is called congruent melting point. Suppose A and B are two components and AB is the compound formed by the chemical combination.The phase diagram is shown in figure:

It has three different solid phases A, B and compound AB and there are three fusion curves AC, BE and CDE. Along the curve AC, the solid A is in equilibrium with the solution of the component B in A. Point A represents the freezing point of pure A. By gradual addition of B to A, the freezing point of A is lowered along the curve AC. Therefore, the number of phases along AC is two.Applying the condensed phase rule of the system, we get F = C – P + 1 = 2 – 2 + 1 = 1 Thus the system is monovariant. Only the composition varies along AC. Similarly B is the freezing point of pure component B. Point D represent the congruent point of compound AB since solid and liquid phases have same composition on it and bicomponent system reduces to unicomponent system at this point. Point D is a nonvariant point since it indicates a definite temperature. In this phase diagram this temperature is higher than the melting points of either A or B although congruent temperature may be higher, lower or in between the melting point of A and B. There are two eutectic point C and E in the diagram. At point C, solid A and solid AB are in equilibrium with liquid phase whereas at E, solid B, solid compound AB are in equilibrium with liquid phase. It has been observed that at a temperature ‘t’ two composition x1 and x’ of liquid phase are in equilibrium with solid AB or AB exhibits two solubilities at one temperature (t). In phase diagram it may be explained as follows. A line DD’ bisects the curve in two equal parts. Left hand part represents bicomponent system of A and AB and right hand part represents bicomponent system of Band AB. Curve DC represents the addition of A in a solid AB, whereas DE represents addition of B into solid AB. 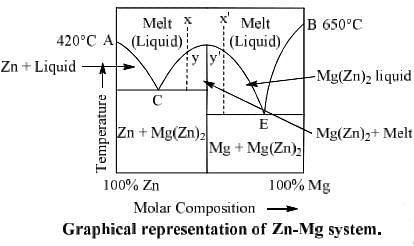 Incongruent melting point is called meritectic or peritectic temperature. In this process three phases i.e. two solids and one liquid are present so it is nonvariant system.

Suppose A and B are two components which form a compound AB2 on combination. Point A and B represent the melting points of pure A and pure B respectively whereas point D represents the incongruent melting point for AB2. Curves AC and BD represent the fusion curves of component. A and B respectively. Component A and liquid are in equilibrium on curve AC of compound AB2 on which AB2 and liquid are in equilibrium.Compound AB2 dissociates at D as follows:

Component B and liquid are in equilibrium on curve BD. Curve CD is the fusion curve  Similarly point C is nonvariant at which solid A, solid AB2 and liquid are in equilibrium (F = 0). This point is called eutectic point.  Curve CD can be extended upto ‘D’. Point D is a called submerged maxima since it is not observed in practice. Picric acid-Benzene, Gold-Antimony, Sodium-Potassium, Sodium sulphate-water, sodium chloride-water are some examples of such type of system. 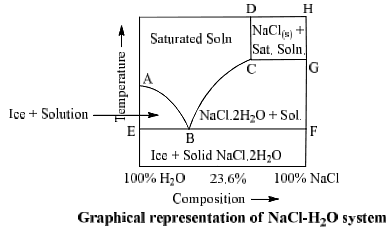 Phase diagram of this system in shown in figure: 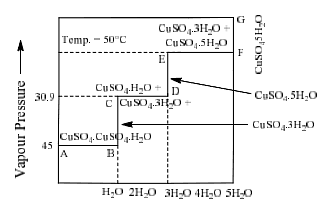