Compton EffectThe phenomenon in which the wavelength of X-rays increases when scattered from a suitable target is called Compton Effect.This kind of scattering is also called incoherent scattering.

Explanation:When x-ray photon interacts with matter, it collides with electrons and transfers its energy partially to the electron and get scattered with lesser energy. As a result frequency of the scattered x-ray is less than the incident beam and hence wavelength of the scattered beam is more than that of the incident beam. It can be shown that change in wavelength when X-ray undergo Compton scattering is given by 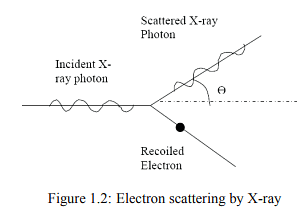