The document Pineal Body and Pancreas NEET Notes | EduRev is a part of the NEET Course Biology Class 11.
All you need of NEET at this link: NEET 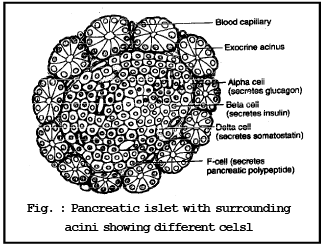 (A) Alpha cells (α - cells) : These are the largest cells present in peripheral region these are approximately 25% of the total cells. They secrete glucagon hormone.

(B) Beta cells (β- cells) : These are the small cells present in central region. These are about 60–65% part of total cells. They secrete Insulin hormone.

(C) Delta cells (d - cells) OR Gamma cells (g - cells) : These cells are found in middle region. These are about 10% part of total cells .They secrete somatostatin hormone which regulates the activities of α-cells and β - cells.

(D) F cell or PP– cells : Along with above mentioned cells, some other cells are also found in islet of Langerhans, these are called PP - cells which secrete pancreatic polypeptide hormone.

(ii) β - chain - It is made up of 30 amino acids. Both the branches or chains are bind together with cross bonds of disulphide bonds.

(I) Actions on cell membrane permeability.

On Membrane permeability : Except brain cells, R.B.C's. retina, insulin stimulates the permeability and consumption of glucose in all somatic cells.

(2) Promotes glycogenesis. There are two major sites of glycogenesis, liver and the muscles.

Nucleic acid: Insulin promotes synthesis of DNA and RNA. Normal concentration of sugar in blood is 90 - 110 mg. per 100 ml. of blood. It affect the BMR in cells.

Hypersecretion of Insulin :– Or – Hyperinsulinism :

(3) Somatostatin :– It regulates the secretion of insulin and glucagon.

(4) Pancreatic Polypeptide (PP) :– Its functions are unknown yet today perhaps it controls the absorption of food in intestine.