Pipeline HazardsA pipeline hazard occurs when the pipeline, or some portion of the pipeline, must stall because conditions do not permit continued execution. Such a pipeline stall is also referred to as a pipeline bubble. There are three types of hazards: resource, data, and control.

Let us consider a simple example of a resource hazard.Assume a simplified five-stage pipeline, in which each stage takes one clock cycle. In Figure 3.6a which a new instruction enters the pipeline each clock cycle. Now assume that main memory has a single port and that all instruction fetches and data reads and writes must be performed one at a time. In this case, an operand read to or write from memory cannot be performed in parallel with an instruction fetch. This is illustrated in Figure 3.6b, which assumes that the source operand for instruction I1 is in memory, rather than a register. Therefore, the fetch instruction stage of the pipeline must idle for one cycle before beginning the instruction fetch for instruction I3. The figure assumes that all other operands are in registers 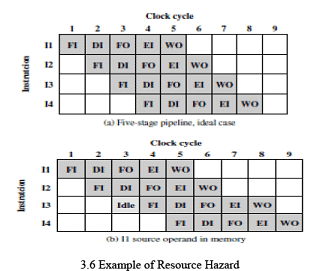 As an example, consider the following x86 machine instruction sequence:

Figure 3.7 shows the pipeline behaviour. The ADD instruction does not update register EAX until the end of stage 5, which occurs at clock cycle 5. But the SUB instruction needs that value at the beginning of its stage 2, which occurs at clock cycle 4. To maintain correct operation, the pipeline must stall for two clocks cycles. Thus, in the absence of special hardware and specific avoidance algorithms, such a data hazard results in inefficient pipeline usage. There are three types of data hazards;

• Read after write (RAW), or true dependency:.A hazard occurs if the read takes place before the write operation is complete.

• Write after read (RAW), or antidependency: A hazard occurs if the write operation completes before the read operation takes place.

• Write after write (RAW), or output dependency: Two instructions both write to the same location. A hazard occurs if the write operations take place in the reverse order of the intended sequence. The example of Figure 3.7 is a RAW hazard.

Control Hazards  A control hazard, also known as a branch hazard, occurs when the pipeline makes the wrong decision on a branch prediction and therefore brings instructions into the pipeline that must subsequently be discarded.