PHASES OF GROWTH
(1) Phase of cell division or cell formation :- Number of cells is increases by cell division.

(2) Log phase :- Also called as exponential phase. During this phase growth is maximum & most rapid. 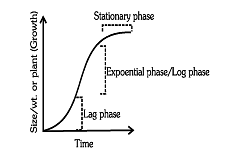 (1) Light :- Light involves in photosynthesis and determine the direction of shoot and root growth. Light controlled morphogenesis of plant is called photomorphogenesis.

(2) Temperature :- Optimum temperature for growth is 20 - 35°C. temperature above 45°C damages the protoplasm and growth can be retarded.

Effect of low temperature on flowering is called vernalization.

(3) Water :- Water maintains the turgidity of cell, which is essential for growth. (TP is important for growth.) in order to cell to grow ψw must not be allowed to reach zero.

(5) Mineral nutrients :- All essential elements are compulsory for growth and metabolism.

Physiological effects and applications of auxin

(1) Apical dominance :- The phenomenon, in which apical bud dominates over the growth of lateral buds is called apical dominance. Prunning in gardens promotes densing of hedge.

(8) Flower initiation :- Auxin is inhibitor of flowering but it promotes uniform flowering in pine apple & litchiplants.

(9) Parthenocarpy :- Seed less fruits can be produced by spray of IAA. (By Gusteffson)

(11) Femaleness :- Feminising effect in some plants.

(12) Flower & fruit thinning :- Certain trees like mango form less number of fruits in alternate years. But auxins can produced normal fruit crops every year. This is known as fruit thinning.

Bioassay means the testing of substance for it's activity in causing a growth response in a living plant or it's parts.

Gibberellins induce stem elongation in rosette plants (Cabbage) this phenomenon known as bolting effect. (Elimination of rossete habit in some plants by gibberellins action is bolting)

(2) Elongation of genetic dwarf plants :- When gibberellin are applied to dwarf maize, Pisum & Vicia faba, then they become tall. The rosset plant of sugarbeet indicate an extreme dwarfism, this habit can be eliminate by GA.

(4) Parthenocarpy :- Like auxin, exogenous use of GA also induces the formation of seedless fruits.

(5) Substitution of cold treatment or vernalisation :- The biennials plants form their vegetative body in the Ist year. Then they pass through a winter season & produce flower & fruits in IInd year. GA induces flower in first year.

(6) Breaking of dormancy :- GA breaks the dormancy of seeds, buds and tubers

(11) In fermentation :- More growth of yeast cells by GA.

(1) Cell division & Cell enlargement :- One of the most important biological effect of CK (cytokinin) on plants is induction of cell division. In tissue culture also.

(3) Morphogenesis :- Morphogenetic changes induced by CK in presence of IAA.

(6) Seed germination :- Seeds of parasite plant (Striga) can germinate in the absence of host by CK treatment.

(9) Parthenocarpy in some fruits.

(6) Delaying of flowering in LDP.

(2) Stimulation of senescence & abscission of leaves. Ethylene is synthesized in large quantity by ripening fruits and senescent organs.

(i) Inhibition of stem elongation

(5) Inhibits root growth :- Ethylene is inhibitor of root growth but stimulates the formation of root hairs.

(8) Tightening of hooks of epicotyl and hypocotyl.

(9) Inhibits the polar movement of auxin.

(i) Rhizocalines :- Produced by leaves & induce formation of roots.

Morphactins or (HFCA) These are, synthetic growth inhibitors, which are polyvalent (wide range) in action

(i) Inhibition of internode elongation

(A) Movement of locomotion :- When the whole plant, plant part or organs of plant move from one place to another place.

(I) Autonomous :- (by internal stimulus )

(i) Rotation – Whole protoplasm moves around the one central vacuole, in one direction. Ex :Hydrilla, Vallisneria cells.

(iii) Thermotactic :- Due to stimulus of temperature. Ex : Chlamydomonas , Euglena (B) Movement of curvature :- Movement of plant organs only.

Plants growth is of two types :

(a) Arithmetec growth : From dividing cell two new cells are formed (by mitotic division) out of them one daughter cell continues to divide while other differentiate and mature (stop dividing).

(b) Geometric / Exponential growth : From dividing cell (bymitotic division) both daughter cells retains the ability to divide and continue to do so. 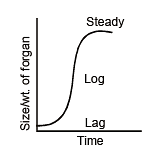