Plasma membrane is a living, ultra-thin, elastic, selectively permeable membrane. Chemically, it is composed of phospholipids, proteins, oligosaccharides and cholesterol.

J.D. Robertoson noted trilamilar or 3-layered structure for all membranes he studied. Based on his findings, he proposed the 'unit membrane hypothesis' in 1959.

The two types of proteins are:

(i) Intrinsic proteins which are embeded in the phospholipid matrix incompletely or completely, and

(ii) Extrinsic proteins which occur superficially either on the outer surface or on the inner surface of the phospholipid layer.

In other words, the membrane is a viscous fluid with phospholipids and protein molecules arranged as a mosaic.

Presence of lipids and proteins provides flexibility to the plasma membrane. Proteins present in the membrane serve as:

(i) Enzymes catalysing chemical reactions within the membrane.(ii) Transport proteins (permeases) for movement of water soluble ions.(iii) Pumps for active transport of materials and(iv) Receptor proteins (e.g., glycoproteins on the cell surface) to recognize and bind specific molecules such as hormones.Fluid mosaic model is also described as "a number of protein icebergs floating in the sea of lipids'.

1. The useful molecules enter the cell,

2. The metabolic intermediates remain within the cell and

3. The secretions and wastes leave the cell.

Thus, semipermeability of cell membranes enables the cell to maintain homeostasis, i.e., a constant internal environment inspite of the changes outside it.

The substances generally drawn in the cell include :

(i) Raw materials for metabolism, viz. food stuffs, water, salts and oxygen; and

The substances generally turned out of the cells include :

(i) The products of metabolism, namely, nitrogenous wastes and carbon dioxide; and

Following mechanisms are involved in the entry or exit of various materials across p.m.

A. Physical Processes: These processes are slow and do not expend energy. These occur down the concentration gradient and do not use carrier proteins. Physical processes include. (i) Diffusion, (ii) Osmosis.

It is faster in gaseous phase than in liquid phase or solid phase.

(i) Diffusion helps in the distribution of various substances throughout the cytoplasm of the cell without much delay.(ii) It helps in the exchange of respiratory gases (oxygen and carbon dioxide) between the body cells and their environment.(iii) Various materials such as gases, liquids and solids dissolve in the medium, i.e., air or liquid by diffusion.(iv) Loss of water in vapours form from the aerial parts of the plants (transpiration) occurs through diffusion.(v) Flowers of plants spread aroma through diffusion. It attracts insects and other animals for pollination.

Experiment: Demonstration of Osmosis in the Laboratory. 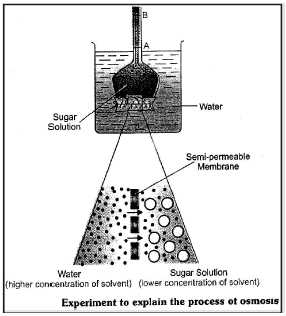 Other Examples of Osmosis

2. Most plant cells have the tendency to gain water due to osmosis.

3. Absorption of water by the plant roots from the soil through root hairs is also an example of osmosis.

5. Stomata are present in the leaves. They open and close at different times of the day due to osmotic movements of water.

Difference between Diffusion and Osmosis

Type of transport of materials across the plasma membrane with the help of carrier proteins is called mediated transport.

In liver and red blood cells, facilitated transport moves glucose across the cell membrane by specific carrier protein molecule in both directions, depending upon whether glucose concentration is higher inside or outside the membrane.

Mechanism of Active Transport of Materials :

(iii) The substrate bond carrier protein undergoes conformational change and carries the substrate through a channel in it to the cytoplasmic side of the membrane.

(iv) Now, the form of binding site changes and the substrate is released. The carrier protein regains its original form and is ready to transport another molecule of substrate.

There are many active transport systems in the cell. Among these, sodium-potassium exchange pump is prominent. It maintains sodium and potassium gradients between cells and the surrounding extracellular fluid.

(iii) It helps in muscle contraction,

(iv) It helps in urine formation in kidney tubules,

(v) It helps in salt excretion in marine birds, and

(vi) It helps in controlling water contents of the cell.

Animal cells can also actively take in and turn out materials in masses much larger than in the hither to described processes by utilizing energy. Such materials include macromolecules, lipid droplets and solid particles. Items of this size cannot cross the phospholipid bilayer by diffusion or with the help of transport proteins. Special processes are involved in the transport of such large quantities of materials.

These include endocytosis (phagocytosis) and exocytosis.

The term endocytosis refers to invagination of a small region of plasma membrane, and ultimately forming an intracellular membrane-bound vesicle. Endocytosis is not shown by plant cells because of their rigid cell wall and internal turgor pressure. Depending upon the intake of fluid droplet or solid particles, endocytosis is of two types :

The non-specific intake of a tiny droplet of extracellular fluid by a cell through the cell membrane which cannot otherwise pass through it. It is also, therefore, termed as cell drinking. It was first observed in Amoeba. In this process, a small region of plasma membrane invaginates and the fluid droplet passes into the pocket so formed. This pocket is called caveola. The pocket deepens and finally nips off as a fluid-filled vacuole called pinosome or pinocytotic vesicle.

Phagocytosis is the intake of solid particles by a cell through cell membrane. It is also called cell eating. Phagocytosis is the major feeding method in many unicellular organisms (e.g., Amoeba) and simple metazoa (e.g., sponges).

The document Plasma Membrane, Cell Wall and Nucleus - Notes | Study Science Class 9 - Class 9 is a part of the Class 9 Course Science Class 9.
All you need of Class 9 at this link: Class 9
Attempt Now
Join Course