The document Plasmons and Polariton Physics Notes | EduRev is a part of the Physics Course Basic Physics for IIT JAM.
All you need of Physics at this link: Physics

What are plasmons and what are polaritons?Plasmons and polaritons are both quantum mechanical quasiparticles which are used to describe interactions in a solid.Plasmons:The free electrons in a metal may be considered an electron plasma. In this case a plasmon is a quasiparticle resulting from the quantization of plasma oscillations of the free electron gas density with respect to the fixed positive ions. Plasmons are Bosons.The plasmon energy can be estimated as:

Planck constant
We can define the characteristical plasmon frequency

The optical properties of metals can be described with plasmons. Light of frequency below the plasmon frequency is reflected, because the electrons in the metal screen the electric field of the light. Light of frequency above the plasma frequency is transmitted, because the electrons cannot respond fast enough to screen it. Most metals and semiconductors are reflective in the visible range because their plasmon frequency is in the ultraviolet. Some metals, such as copper and gold, have electronic interband transitions in the visible range, whereby specific energies (colors) are absorbed. Thus, those metals have a distinct color.

Polaritons: Polaritons are bosonic (quasi‐)particles resulting from strong coupling of electromagnetic waves with an electric or magnetic dipole‐carrying excitation (not to be confused with the polaron, which is a fermion).  At the point where the two dispersion relationships of light and excitation are crossing each other they have the same energy and therefore coupling occurs. This behavior bases upon the level repulsion‐principle, also called avoided crossing. That means that in a system of two coupled oscillators with two natural frequencies, as the coupling strength increases, the lower frequency decreases and the higher increases. This effect can be viewed as a repulsion between the frequencies. An simulated example for GaP can be seen in figure 1. Another example for a measured polariton dispersion in CuCl at 300 K with fitted curves can be seen in figure 3.One can distinguish between different types of interactions:

The most discussed types of polaritons are phonon‐polaritons. They can be found in ionic crystals (mostly insulators), such as NaCl and they only occur in materials with 2 or more atoms per unit cell, because otherwise there are no optical phonons. 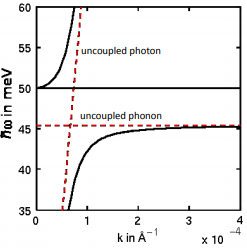 How can they be measured in metals and in insulators?Plasmons can be measured with EELS (Electron Energy Loss Spectroscopy):A  beam of electrons with a well known kinetic energy is shot on the material. Some of the electrons will be scattered inelastic, and lose energy. The amount of energy loss can bemeasured with a spectrometer and interpreted in terms of what caused the energy loss. In figure 2 such an electron loss spectrum can be seen. 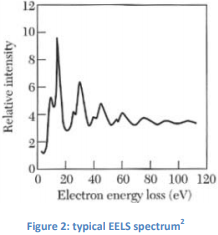 The peaks correspond to certain modes with a certain plasma frequency. The spacing between the peaks is hwp. In every mode 2 peaks can be found. The dominant peak comes from the bulk plasmons, whereas the smaller peak is caused by surface plasmons.Raman spectrometry, on the other hand is well suited for the measurement of phonon‐polaritons in insulators:In general it is used to study vibrational, rotational, and other low‐frequency modes in a system. It relies on inelastic scattering (Raman scattering) of monochromatic light. Typically, a sample is illuminated with a laser beam. The light interacts with molecular vibrations or excitation modes in the sample, which results in an energy shift (up: Anti‐Stokes‐shift or down: Stokes‐shift) of the light. The shift in energy can be measured and gives information about the material.An example for a measured phonon‐polariton dispersion in CuCl at 300 K with fits can be seen in figure 3. 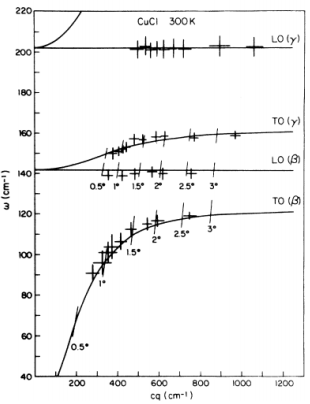 Figure 3: Polariton dispersion in CuCl at 300 K, full lines are the calculated best fit to the experimental data3