Figure 11.2: Schematic of a long beam on elastic foundation subjected to concentrated load at mid span

Figure 11.3: Free body diagram of half the section of long beam on elastic foundation subjected to concentrated load

To obtain the solution we section the beam at x = 0, the point of application of the concentrated load, as shown in figure 11.3. Since, there is a concentrated force acting at x = 0, the shear force would be discontinuous at x = 0 and hence the fourth derivative of the deflection, ∆ does not exist. Consequently, the governing equation (11.9) is valid only in the domain x > 0 and x < 0 and not at x = 0. Therefore, we segment the beam at x = 0 and solve (11.9) on each of the segments. Then, we ensure, the differentiability of the second order derivative of deflection so that the third order derivative exist. This is required to ensure the existence of shear force at x = 0.

By sectioning the beam at x = 0 we find the bending moment and shear force at this location. Using equation (11.2) we find that

has to be ensured. Therefore the value of bending moment at both the segments of the beam should be the same.Substituting equation (11.2) in (11.3) and assuming the beam to be homogeneous and prismatic, we obtain

Thus, the distribution of the reaction from the foundation along the axis of the beam given in (11.1) evaluates to:

The variation of the bending moment along the axis of the beam obtained from (11.2) is:

The shear force variation along the axis of the beam computed using (11.14) is: 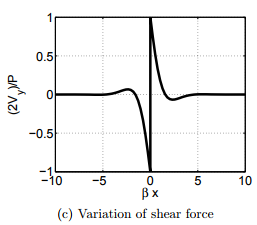 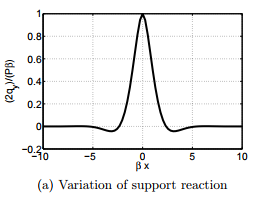 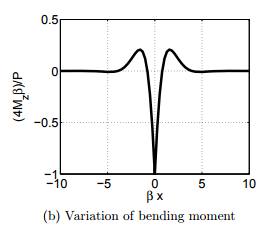 Figure 11.4: Variation of support reaction, bending moment and shear force along the axis of the beam on elastic foundation

Figure 11.5: Schematic of a long beam on elastic foundation subjected to concentrated moment at mid span