1. Determination of Hybridization and Shape of a Molecule: 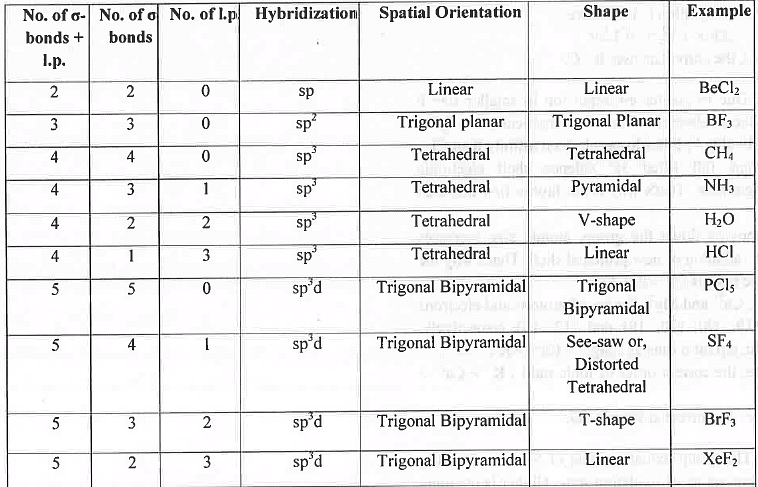 A. Determine the Shape and Hybridization of BrF3:The valence shell electronic configuration of Br atom is: 5s25p55d°.Br atom in ground state:

The hybrid orbitals used by bromine atom in BrF3 are sp3d. Hence, its spatial orientation is Trigonal Bipyramidal. But, due to the presence of two l.p. of electrons, its shape will be T-shape.B. Determine the Shape and Hybridization of XeO2F2:The valence shell electronic configuration of Xe atom is : 5s25p65d°.Xe atom in ground state:

Hence, Xe atom in XeO2F2 is sp3d hybridized. Hence, it has TBP spatial orientation. But, due to the presence of one l.p. of electrons it will have distorted Td shape.C. Determine the Shape and Hybridization of Br3+:The valence shell electronic configuration of Br+ ion is : 4s24p44d°.Br+ in ground state:

Hence, Br3+ has sp3 hybridization and its geometry of is tetrahedral. But, due to presence of two lone pairs of electrons, it has V-shape.The valence shell electronic configuration of I" ion is: 5s25p65d°.I- in ground state:

Hence, I3- has sp3d hybridization. Hence, it has trigonal bipyramidal spatial orientation. But, due to presence of three lone pairs of electrons, it has linear shape.2. Valence Shell Electron Pair Repulsion (VSEPR)Theory: It consists of five rules. These are explained below with examples:

3. Covalency in a Molecule (Fajan's Rule): When a cation come closer to an anion, the cation will try to deform the anion and vice versa. But, due to the much smaller size of a cation, it will deform the anion much more than that does by anion on cation. Such kind of deformation in a molecule is known as Polarisation. The power with which a cation polarize an anion is known as polarising power of cation and the ability of an anion to become polarize by the cation is known polarisability of anion.According to Fajan higher is the positive charge on cation and smaller is the size of the cation, greater will be the polarising power of cation and hence, higher will be the covalent character of the molecule. The polarising power which ia termed as ionic potential (ϕ) of a cation is defined as the charge of cation to the size of the cation i.e. ϕ = charge of cation/size of cation. Hence, the polarising power of the following cations are : Al3+ > Mg2+ > Na+.Also, according to Fajan higher is the negative charge on anion and larger is the size of the anion, greater will be the polarisability of anion and hence, higher will be the covalent character of the molecule. Hence, the polarisability of the following anions are : I- > Br- > Cl- > F-.Application of Fajan's Rule:

4. Born Haber Cycle: The Born-Haber Cycle for the formation of NaCl crystal from its constituent elements is as follows: 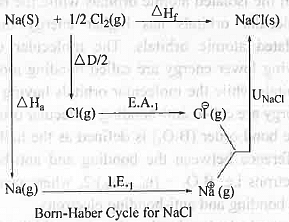 Where, ΔHa, ΔD/2, ΔHf, I.E.1 , E.A.1, UNacl terms represent the heat of atomization of metallic sodium, half of the bond dissociation energy of chlorine molecule , enthalpy of formation of NaCl , first ionization energy of sodium, first electron affinity of chlorine and Lattice energy of NaCl.Hence, from the Born-Haber Cycle it is clear that no electronegativity term is involved in the equation. Hence, electronegativity cannot be estimated by using Born-Haber Cycle in case of NaCl.

Where, A = Madelung constant, n = Born exponent, NA = Avogadros no., r0 = Equilibrium inter-nuclear distance, Z+Z- is the product of opposite charges. Now let us consider the melting points o f Al2O3, CaO, NaF, KCl.The various ions are Al3+, O2-, Ca2+, Na+, F- and Cl-. Hence, Al2O3 will have highest lattice energy due to its highest Z+Z- value. Then, due to higher Z+Z- value, CaO will have second highest lattice energy. Chloride ion is larger than the fluoride ion and potassium ion is larger than the sodium ion . Hence, NaF will have higher lattice energy than the KCl. Hence, the decreasing order of lattice energy is : Al2O3 > CaO > NaF > KCI.6. Molecular Orbital Theory (M.O.T.):