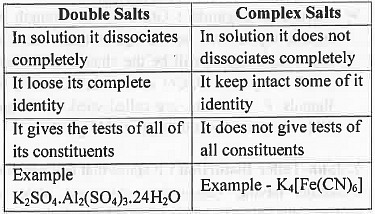 2. Werner's Theory: The basic postulates of Werner's coordination theory are given below:

II. Classification Based on the Mode of Electron Donation:

7. Jahn-Teller Distortion: It states that any non-linear molecule having degenerate electronic state will undergo distortion to remove degeneracy and to reduce energy. Strong J-T distortion occurs due to unsymmetrical distributions of electrons in eg orbital while weak J-T distortion will occur due to the unsymmetrical distribution of electrons in t2g orbital.In case, of K4[Cr(CN)6](A) : It is a LS com plex as the ligand CN- is a strong field ligand. Cr is present as Cr2+. Hence, its electronic configuration will be: t2g4eg°. As the t2g orbital is unsymmetrically occupied, it will have weak Jahn-Teller distortion.In case of K4[Fe(CN)6](B): It is also a LS complex as the ligand CN- is a strong field ligand. Fe is present as Fe2+. Hence, its electronic configuration will be: t2g6eg°. As the t2g orbital is symmetrically occupied, it will have no Jahn-Teller distortion.8. Trans Effect: The formation of cis-platin (anticancer agent) and trans-platin can be explained on the basis of trans effect. When [Pt(NH3)4]2+ is reacted with Cl-,[PtCl(NH3)3]+ will form. Now the order of trans effect of chloride and ammonia ligands are: Cl- > NH3. Hence, the incorporation of second chloride ligand will occur at the position ortho to amine and para to chloride by following the principle of greater trans influence of chloro ligand. The reaction scheme is shown below: 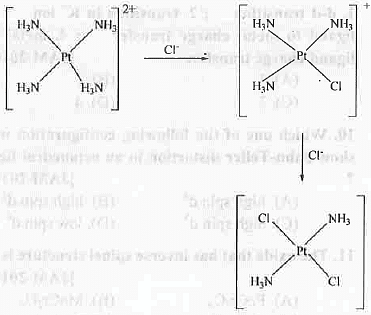 It is prepared from tetrachloroplatinate(II). Chloride ligand has greater trans effect than Ammonia ligand. That's why PtCl42- is used as the precursor for the preparation of cis-platin. 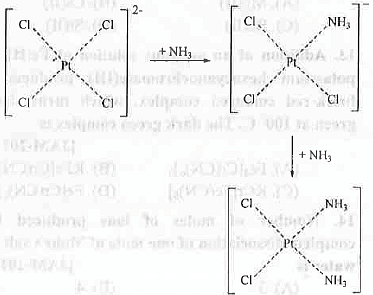