Electromagnetic (EM) waves are changing electric and magnetic fields, carrying energy through space.  EM waves require no medium, they can travel through empty space.  Let E denote the electric field vector and B the magnetic field vector of the EM wave.  For electromagnetic waves E and B are always perpendicular to each other, and perpendicular to the direction of propagation of the wave. 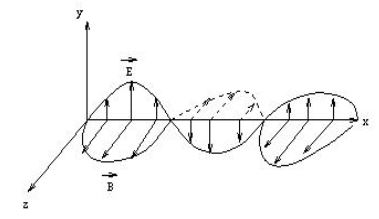 An unpolarized electromagnetic wave traveling in the x-direction is a superposition of many waves.  For each of these waves the electric field vector is perpendicular to the x-axis, but the angle it makes with the y-axis is different for different waves.  For a polarized electromagnetic wave traveling in the x-direction, the angle the electric field makes with the y-axis is unique.  Natural light is, in general, unpolarized.  The direction of the electric field changes too quickly to be measured.

If q = 90o the transmitted intensity is zero. A polarizer produces linearly polarized light.  It is often convenient to orient the transmission axis of a polarizer vertically or horizontally to produce light with vertical or horizontal linear polarization. 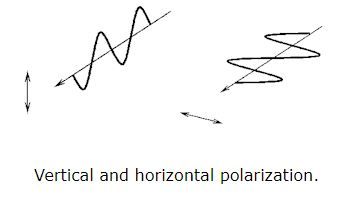 Light can also be elliptically or circularly polarized.  For light with circular polarization the electric field vector rotates in a plane perpendicular to the direction of propagation. 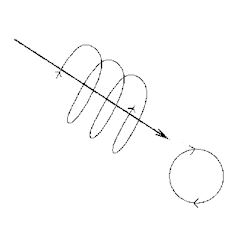 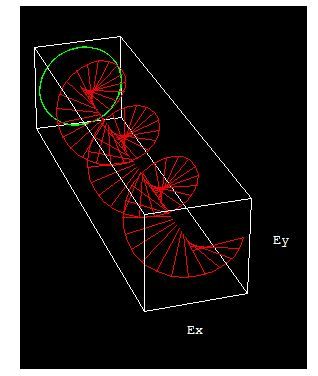 Dichroism:  Certain naturally occurring crystalline materials have transmittance properties which depend on the polarization state of light.  The most common method of producing polarized light is to use polaroid material, made from chains of organic molecules, which are anisotropic in shape.  Light transmitted is linearly polarized perpendicular to the direction of the chains.  If linearly polarized light passes through polaroid material, then the transmitted intensity is given by It = I0cos2q, (Law of Malus), where q is the angle between E and transmission direction.

Reflection:  When unpolarized light is incident on a boundary between two dielectric surfaces, for example on an air-glass or air water boundary, then the reflected and transmitted components are partially polarized.  The reflected wave is 100% linearly polarized perpendicular to the plane of incidence when the incident angle is equal to the Brewster angle qB, where tanqB = n2/n1.

When the sun is at a low angle in the sky, the sunlight reflecting off the surface of water is nearly 100% horizontally polarized because the angle of incidence is close to the Brewster angle.  Glare-reducing sunglasses are coated with a polarizer with a vertical transmission axis and therefore block the reflected light.

Birefringence (double refraction):  Certain crystalline substances have a refractive index which depends upon the state of incident polarization.  Unpolarized light entering a birefringent crystal not along the optic axis of the crystal is split into two beams which are refracted by different amounts and polarized perpendicular to each other. 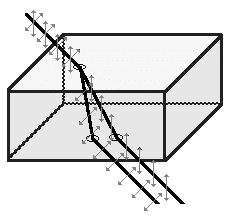 Optically active (circular birefringent) materials rotate the direction of polarization of linearly polarized light.  The amount of rotation depends on the wavelength of the light.  Sugar molecules have a handedness (chirality) and in solution are optically active.  If we polarize white light and pass it through sugar syrup, the direction of polarization of the light emerging from the syrup will be different for the different color components.  If the light then passes through a second polarizer, its color changes with the orientation of the transmission axis of this polarizer.

Some materials turn birefringent when stressed.  By placing transparent materials between two polarizers, we can perform stress analysis tests. 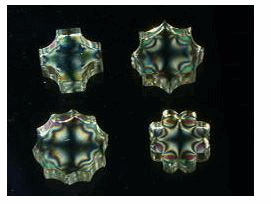