The document Polygenic Inheritance & Pleiotropy Notes | Study Biology Class 12 - NEET is a part of the NEET Course Biology Class 12.
All you need of NEET at this link: NEET

What is Polygenic Inheritance?

Brief description of some of the traits:

Skin pigmentation:Inheritance of skin pigmentation is polygenic inheritance. Around 60 loci contribute to the inheritance of a single trait. If we take an example of a pair of alleles of three different and unlinked loci as A and a, B and b, C and c. The capital letters represent the incompletely dominant allele for dark skin colour. The more capital letters show skin colour towards the darker range and small letters towards the lighter colour of the skin. Parents having genotype AABBCC and aabbcc will produce offspring of intermediate colour in the F1 generation, i.e. AaBbCc genotype. In the F2 generation of two triple heterozygotes (AaBbCc x AaBbCc) mate, they will give rise to varying phenotypes ranging from very dark to very light in the ratio 1:6:15:20:15:6:1.

From light to dark:

Polygenic inheritance in plants includes the colour and shape of the stem, pollen, flower, yield, oil content, size of a seed, time to mature or flower, etc.

Brief description of some of the traits:

Kernel colour of the wheat:The three independent pairs of alleles are involved in the expression of kernel colour of wheat. They show independent assortment. When dark red wheat kernel (AABBCC) is crossed with the white wheat kernel (aabbcc) the F1 generation has an intermediate red colour kernel (AaBbCc). When F1 generation is crossbred, F2 generation has 63 red kernel plants having different shades of red and 1 white kernel.

Effect of environment on Polygenic Inheritance

What is Pleiotropy in Genetics?

In genetics, Pleiotropy is defined as the expression of multiple traits by a single gene. Pleiotropy is derived from a Greek word meaning more ways.A simple example of a Pleiotropy is phenylketonuria is a disease. It is a genetic disorder caused by the low metabolism of the amino acid phenylalanine in the body cells. 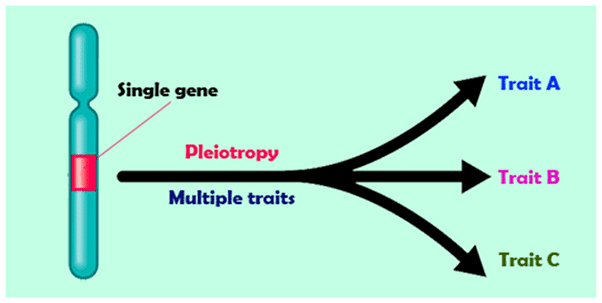 Gregor Mendel, the father of genetics made various interesting observations during his study of inheritance regarding the colour of different plant components. Significantly, Mendel also observed that the plants with coloured seed coats had coloured leaf axils ( a part that connects leaves to stems) and coloured flowers. Mendel also noticed that pea plants had colourless seed coats with no pigmentation on their axils and white-coloured flowers. The colour of the seed coat was always concerned with specific axil and flower colour.Today we come to the conclusion that Mendel’s observations were based on the result of pleiotropy which is the phenomenon wherein an individual gene plays its role in multiple phenotypic traits. Here, the gene of seed coat colour was not the only one responsible for its colour but also for the axil pigmentation and flower.A human genetic disorder known as the Marfan syndrome is caused due to the mutation in a single gene yet it affects various aspects of growth and development that include vision, height, and heart functioning. All these are examples of pleiotropy or a gene that affects multiple characteristics.

The gene which focuses on the number of functions of a particular gene is termed as the Gene pleiotropy. It is also referred to as molecular-gene pleiotropy.When we talk about Mendel’s experiments with white-coloured flower and purple coloured plants, we do not think about phenotypes concerned with the colours of two flowers. However, Mendel observed that the colours were always related to two different features: the seed coat colour and the colour of axils.A plant bearing white-coloured flowers consist of colourless axils and seed coats, whereas plants with purple flowers have brown-grey coloured seed coats with reddish axils. Hence, instead of affecting only one characteristic, the colour gene affects three.Genes of this kind that control multiple and unrelated features are called pleiotropic where the term pleio refers to many and tropic indicates effects. In this manner, the discrete phenotypes could be identified back to a defect in one gene with different jobs.Moreover, the alleles of pleiotropic genes are transferred in a similar way as alleles of genes affect the single traits. Although a phenotype has various elements, these elements are expressed as a package and the recessive and dominant versions of the package would be visible in the offspring of two heterozygotes in a 3:1 ratio.

The genes which are affected by human genetic disorders are mostly pleiotropic. For example, a person with a hereditary disorder known as Marfan syndrome could have a set of unrelated symptoms that involve the following:

The above symptoms do not seem relevant but as it turns out, it could be traced back to the mutation of an individual gene. This gene encodes a protein into chains and makes fibrils that provide flexibility and strength to the body’s connective tissues. Mutations that are responsible for Marfan syndrome minimize the amount of functional protein formed by the body and results in lesser fibrils.

The document Polygenic Inheritance & Pleiotropy Notes | Study Biology Class 12 - NEET is a part of the NEET Course Biology Class 12.
All you need of NEET at this link: NEET