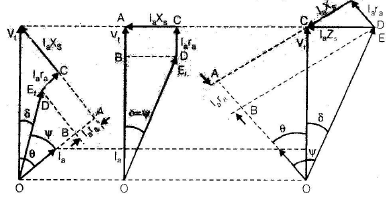 POWER FLOW THROUGH AN IMPEDANCE• Two ac voltage source E1 and E2 interconnected through an impedance Z∠θZ. With the current l flowing from E1 to E2.

Here impedance angle θZ is given by

For a cylindrical rotor synchronous motor

Remember:• The difference between input (pig or pim) and output (Pog or pom), for either a generator or a motor, must be equal to ohmic loss  la2 ra .

• Power input to generator is at the terminals where the voltage is Ef and power output of the motor Pom is also at the same terminals. The powers Pig and Pom Should therefore be equal and opposite to each other but with δ replaced by (-δ)

• Output terminal for the generator are same as the input terminals for the motor.

when Pim is maximum, δ = 90 + αz , the reactive power under this condition

POWER FACTOR CONTROL• Power factor of synchronous machine is control by the adjustment of their field excitation. 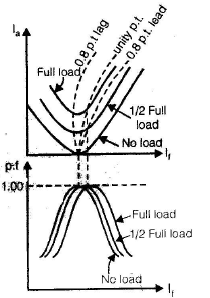 Alternator• When excitation emf is Ef1, the alternator is underexcited and the armature current la1 is leading Vt = Vb = bus-bar voltage.• For Ef1 , underexcited alternator operates at a leading and absorbs reactive power from infinite bus. 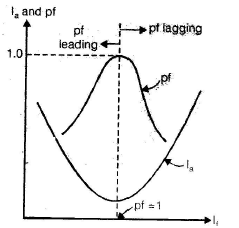 Effect of field current on an alternator connected to infinite bus

• With an increase in field current, excitation emf rises. For excitation emf Ef2 , armature current la2 is im phase with Vt = Vb. Under unity pf operation, the alternator is said to be normally excited and it neither delivers nor absorbs reactive power. For Ef3 more than Ef2, la3 lag Vt. The overexcited alternator operates at a lagging pf and delivers reactive power to infinite bus.• Just like a synchronous motor, plot of la versus lf is called V-curve of a alternator connected to an infinite bus. The power factor versus field current curve, known as inverted V-curve.

POWER-ANGEL CHARACTERISTICS Cylindrical-rotor synchronous Machine• A generator and is feeding power to an infinite bus of constant voltage Vt. 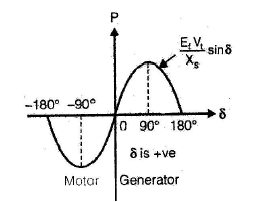 • The per phase power delivered to the infinite bus

Salient-pole Synchronous Machine• The per phase power delivered to the bus. • The total power consists of a fundamental component

and a second harmonic component

• For a salient pole synchronous generator, the per phase reactive power in terms of power angle δ and for a lagging power facor is given by

• The synchronizing power coefficient is a measure of the stiffness of electromagnetic coupling between stator and rotor fields. Too large stiffness of coupling means that the motor tends to follow closely, the variation of speed caused by the disturbance in electric power supply. In case there is no power-supply disturbance, then too much stiffness coupling would cause the motor speed to remain practically constant, regardless of the mechanical load fluctuations.

SYNCHRONOUS MACHINE STABILIYT• A synchronous machine connected to an infinite bus is said to be working in a stable condition, if it is in synchronism or in step with the bus.

Stability• The tendency of a synchronous mechine to develop forces so as to maintain synchronism and equilibrium is called stability.

Stability Limit• A stability limit represents the maximum power flow possible, when the synchronous machine is operating with stability.

Steady state stability Limit• The maximum power flow possible through a particular point without loss of stability, when the power is increased very gradually. • The steady-state limit can be improved upon as follows:

HUNTING• A synchronous machine operates satisfactorily, if the mechanical speed to the rotor is equal to the stator field speed.• Any departure from these conditions, gives rise to synchronizing forces which tend to maintain this equality.• Phenomenon, involving the oscillations of the rotor about its final equilibrium position, is called hunting.• During the rotor oscillations or hunting. the orientation of phasor Ef changes relative to fixed voltage Vt and because of this reason, hunting is also called phase-swinging. 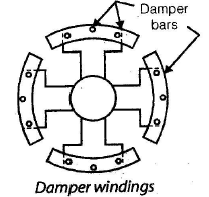 • Damper windings consist of low- resistance copper. brass or aluminium bars embedded in slots in the pole-faces of salient-poles machines. The projecting ends of the bars are connected  to short circuiting strips of the same material asused for the bars. Sometimes interpolar connectors are omitted to form incomplete type of damper winding.

EFFICIENCY OF SYNCHRONOUS MACHINES• The various losses in synchronous machines are:

(e) in iron and(f) in the armature conductors.

• The combination of direct load loss and stray load losses is referred to as shot circuit load loss.

The Stray load loss consists of two components, namely:• iron losss or core loss due to armature leakage flux and• armature ohmic loss due to skin effect and eddy currents in the armature conductors. 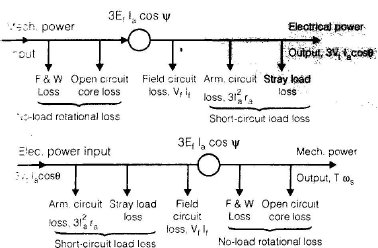 STARTING OF SYNCHRONOUS MOTOR• A synchronous motor is not self starting. It can be started by the following two methods. At starting rotor field stationary and stator field is rotating at h higher speed that is synchronous. Due to the interaction between rotor and stator poles, the torque developed reverses after each half revolution of stator field. Due to its inertia rotor can not respond so quickly hence it remains stationary that's whey synchronous motor is non self-stationary that's why synchronous motor is non self- starting if by some external means rotor is made to rotate at a speed close to synchronous then due to the locking of stator and rotor field rotor will continue to rotate at synchronous speed.