We had seen that electric field has a discontinuity at a charged boundary between two media. Let us examine this a little more carefully. 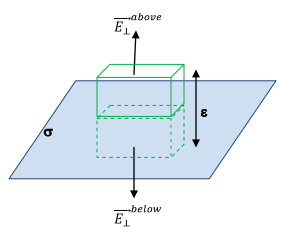 Let us consider the interface between two media which has a charge density σ. (This is not necessarily the infinite sheet discussed earlier, it could be a surface of any shape and size).

Consider a Gaussian pillbox in the shape of a rectangular parallelepiped of cross section A and height ∈ half of which is above the plane and half below. Using Gauss’s law, the flux out of the parallelepiped is due the flux from the top and the bottom surfaces as well as from the side surfaces. Let us look at the normal components of the electric field denoted by

As the height of the parallelepiped ∈ becomes infinitesimally small, the contribution to the flux from the sides become vanishingly small and only the top and the bottom surfaces contribute. If

are the normal components of the electric field on the top and the bottom faces, we have

Thus the normal component of the electric field has a discontinuity, given by

What about the tangential component? Since the contribution to the line integral from the perpendicular sections become infinitely small, we have

Thus, though the normal component of the electric field has a discontinuity, the tangential component is continuous.

Potential Energy of a charge distribution :

Suppose the final configuration of charges is to have charges

We proceed to assemble the charge distribution as follows. Initially let us assume that all charges are at infinity separated by infinite distance from one another. The potential energy of this configuration is zero.

This involves no work as the region through which it moves is a field free region and hence it experiences no force while being brought in. Let us now bring a second charge, say, q2 and place it at

has its electric field already established in space. The potential at

to this charge is

Continuing like this, we get the net work done in bringing a charge

The total work done would then be obtained by summing over this over the index j. However, there is a restriction

because a charge does not exert force ion itself. Further we need an additional factor of half to avoid double counting, for there is only one interaction term between a pair. Thus the net work done, which gets stored as the potential energy of the system is given by

Energy of a continuous charge distribution :

the charge density at that position is

, the element of volume contains

where we have written

in place of dv to emphasize that the volume element is in three dimension. We can convert eqn. (1) to other convenient forms by observing that

using which we can write

We will simplify this expression a little more by using a vector identity,

Which enables us to rewrite (2) as

Where, in the first term we have used the divergence theorem.

This equation can be handled in two different ways. Firstly, observe that the volume that we take can be any volume as long as it encloses all the charges in the distribution. Looking at eqn. (1) the integrand has

as a factor. Even if we are to take a much bigger volume than the original volume, outside the physical volume the charge density is zero and hence it does not contribute to the integral. Thus in principle, we can take the volume to be infinite. If we do that, the first term in eqn. (3) becomes zero because the surface being at infinity, the potential is zero over such a surface. Thus (3) becomes,

Where we have used

The integration in this case is over all space because we have taken the surface term to be zero.

Equation (4) says that the potential energy of a charge distribution is positive definite. We can define a positive energy density

The self energy of a point charge is infinite as can be seen by integrating the square of the electric field due to a point charge over all space using eqn. (4), for

which diverges at the lower limit. We could have anticipated this because the potential at the position of the charge is itself infinite. This problem is known as the self energy divergence problem a discussion of which is beyond our scope. In our calculation of the potential energy of a charge distribution we assume that this divergent self energy is excluded from calculation.

We will illustrate the method of calculating the potential energy of a continuous charge distribution by taking the example of a uniformly charged sphere and calculate the energy by four different methods.

If the total charge is Q, the charge density is constant and is given by

The potential can be obtained from the expression for the electric field that we have calculated earlier, viz.,

The potential at the position

obtained by evaluating the integral

from infinity to the position

For r>R, the potential is given by

In the first method we need to calculate the volume integral

Since the charge density is zero outside the physical sphere, the expression for the potential that need to use is the second expression which is appropriate to r < R,

Method 2 : In this method we will use eqn. (4) which uses the infinite space for volume integration, throwing out the surface term. The electric field is given inside and outside the physical region by the expressions given earlier.

Method 3 : In this method we use eqn. (3) but consider the physical volume and surface. As the surface is in finite space, we cannot ignore the surface contribution. The fields and potential that contribute to this case are the ones corresponding to r <R.

Method 4 : Calculating from the first principle, building up the sphere layer by layer :

In this method we assume that at certain instant we have a charged sphere of radius r having a charge q. We add to this sphere an additional charge dq which we spread uniformly over it, increasing the radius from r to r+dr. If the final charge is to be Q and the radius of the sphere is to be R, at the instant when the radius is r, the charge on the sphere is The additional charge dq is contained in a spherical shell between radii r and r+dr. Thus

The potential energy, which is the total work done in building the sphere starting with zero radius to the final radius is obtained by integrating this expression from r=0 to r=R,

1. A sphere of radius R has a spherically symmetric charge density

2. In the text we had calculated the energy of a uniformly charged sphere by assembling charges layer by layer (see method 4). This method fails while calculating energy of a spherical conductor because charges on a conductor only reside on its surface. Try the following variation. Start with an uncharged sphere of radius a. Calculate the work done in bringing charge q from infinity to the surface of this sphere and spreading it uniformly in a shell of thickness b-a. Take the limit b → a.

1. We first calculate the total charge

Consider a shell of radius r > R and width dr. Since r >R, the electric field at r is due to the charge Q concentrated at origin and is given by

The energy stored in the surrounding space is

The energy is obtained by integrating the square of this expression within the volume,

2. Suppose we start with a neutral sphere of radius a and deposit charge Q uniformly over a shell of thickness (b-a), I.e charge is contained within a spherical shell of radii a and b. The charge density is

If at a certain instant the charges are deposited over a shell of radius (r-a), the amount of charge contained in the shell is

Since the potential on the existing sphere of radius r is

, the work done is

. Thus the total work done in creating a uniformly charged shell of radii a and b is

We would obtain the desired result if we let

To see this, let

Substituting these in the expression for W, we get,

1. A sphere of radius R has a spherically symmetric charge density

2. Find the energy per unit length of a uniformly charged cylinder of radius R having a charge of λ Per unit length.

1. For this problem we need to calculate the electric field, the potential and the charge. Since

the charge enclosed within a radius r is

and the total charge is

The field both inside and outside can be calculated using this and Gauss’s law. We get

The potential outside the volume is

The potential inside is calculated by taking the line integral from the surface (where the potential is known from the above) to the point r,

With these expressions, we will calculate the self energy in four different ways.

In this method we use the formula

We have since the charge density outside the given sphere is zero,

In this method we extend the integrals to infinite space, dropping the surface term. We have

Since this term exactly equals the volume contribution to energy from outside the sphere, this will also give

1. Method 4 consists of building up of the sphere layer by layer. We have calculated the charge enclosed in a sphere of radius r to be

We bring an additional amount of charge

and spread it over the existing sphere so that the new radius is r + dr. The potential on the surface of the sphere of radius r is

so that the total work done is given by

2. The electric field due to the cylinder (ignore edge effect) can be easily calculated using Gauss’s law. It gives,

is the radial direction of the cylindrical coordinates. The potential inside the cylinder is directly calculated from the above expression,

The potential outside the cylinder can be obtained from the expression for the electric field above, with the constant being fixed by continuity of the potential at

(This is messy, but fortunately we can do with only the charge density and potential inside the cylinder by method 1. Taking infinite surface is tricky here because the log does not behave nicely) Thus, energy per unit length