and so the power series converges. Note that we had to strip out the first term since it was the only non-zero term in the series.It is important to note that no matter what else is happening in the power series we are guaranteed to get convergence for x=a. The series may not converge for any other value of x, but it will always converge for x=a.Let’s work some examples. We’ll put quite a bit of detail into the first example and then not put quite as much detail in the remaining examples.

Solution. Okay, we know that this power series will converge for x=−3, but that’s it at this point. To determine the remainder of the x’s for which we’ll get convergence we can use any of the tests that we’ve discussed to this point. After application of the test that we choose to work with we will arrive at condition(s) on x that we can use to determine which values of x for which the power series will converge and which values of x for which the power series will diverge. From this we can get the radius of convergence and most of the interval of convergence (with the possible exception of the endpoints).With all that said, the best tests to use here are almost always the ratio or root test. Most of the power series that we’ll be looking at are set up for one or the other. In this case we’ll use the ratio test.

Before going any farther with the limit let’s notice that since x is not dependent on the limit it can be factored out of the limit. Notice as well that in doing this we’ll need to keep the absolute value bars on it since we need to make sure everything stays positive and x could well be a value that will make things negative. The limit is then,

So, most of the interval of validity is given by −7<x<1. All we need to do is determine if the power series will converge or diverge at the endpoints of this interval. Note that these values of x will correspond to the value of x that will give L=1.The way to determine convergence at these points is to simply plug them into the original power series and see if the series converges or diverges using any test necessary.x=−7:In this case the series is,

This series is divergent by the Divergence Test since

This series is also divergent by the Divergence Test since

Example 2: Determine the radius of convergence and interval of convergence for the following power series.
Solution. Let’s jump right into the ratio test. So we will get the following convergence/divergence information from this. 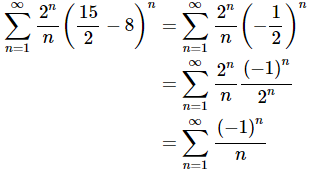 This is the alternating harmonic series and we know that it converges.
x = 17/8.
The series here is, 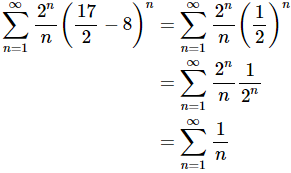 This is the harmonic series and we know that it diverges.
So, the power series converges for one of the endpoints, but not the other. This will often happen so don’t get excited about it when it does. The interval of convergence for this power series is then,

We now need to take a look at a couple of special cases with radius and intervals of convergence.

Solution. We’ll start this example with the ratio test as we have for the previous ones. At this point we need to be careful. The limit is infinite, but there is that term with the x’s in front of the limit. We’ll have L=∞>1 provided x≠−1/2.
So, this power series will only converge if x=−1/2. If you think about it we actually already knew that however. From our initial discussion we know that every power series will converge for x=a and in this case a=−1/2. Remember that we get a from (x−a)n, and notice the coefficient of the x must be a one!
In this case we say the radius of convergence is R=0 and the interval of convergence is x=−1/2, and yes we really did mean interval of convergence even though it’s only a point.

Solution. In this example the root test seems more appropriate. So, Solution. First notice that a=0 in this problem. That’s not really important to the problem, but it’s worth pointing out so people don’t get excited about it.
The important difference in this problem is the exponent on the x. In this case it is 2n rather than the standard n. As we will see some power series will have exponents other than an n and so we still need to be able to deal with these kinds of problems.
This one seems set up for the root test again so let’s use that. 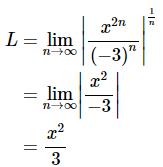 So, we will get convergence if This series is divergent by the Divergence Test since

doesn’t exist.
x=√3:
Because we’re squaring the x this series will be the same as the previous step.

which is divergent.
The interval of convergence is then,
−√3<x<√3.