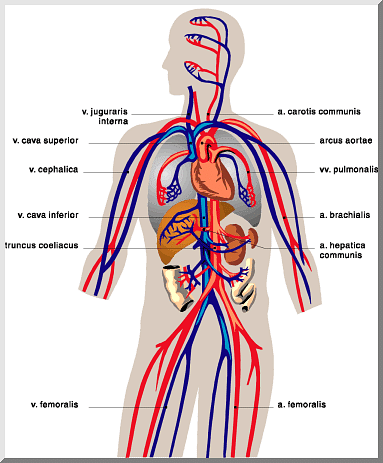 1. What is meant by circulatory system ?

2. What are the components of blood circulatory system in humans ?

3. Name the mineral, which helps in formation of RBC's.

4. Give other name for blood platelets.

7. Name the blood vessel that brings oxygenated blood to the heart chamber.

8. Name the arteries, which supply blood to heart itself.

9. Give other term for bicuspid valve.

10. What is function of valves in circulatory system ?

12. Which chamber of heart pumps blood ?

13. Name the vein which brings blood to left atrium from lungs.

14. Name the major veins which pour blood into right atrium.

19. What is the range of normal systolic and diastolic blood pressure ?

20. Name the instrument, which is inserted in the heart of the patient whose heart does not work normally ?

22. How does lymph differ from blood ?

23. What are the functions of lymph ?

1. Name the blood-receiving chamber of heart.

3. What is pulmonary circulation ?

4. Which chamber of heart has thickest wall ?

5. Name the larger veins that pour blood into right auricle.

6. Name the largest artery of our body.

7. Which chamber of heart receives oxygenated blood from lungs ?

8. Name the valve present between the :

9. What is normal blood pressure ?

12. Which instrument can record electrical changes during heart beat ?

14. Name the part of the circulatory system that acts as filter for microorganisms.

15. Name the major circulation present in our body.

16. Give the technical term for the white vascular connective tissue.

19. Give the position of human heart ?

20. Why there is no backflow of blood from ventricles to auricles ?

1. What are the components of the transport system in human beings ? What are the functions of these compound ?

2. Why is it necessary to separate oxygenated and deoxygenated blood in mammal and birds ?

5. Why is heart beat rate equal to the arterial pulse rate ?

6. Is human circulatory system open or closed ? Why ?

7. In which direction does O2 diffuse between a capillary and a cell ? Why does it diffuse in that direction?

8. What is the primary function of RBC's ?

9. Predict the effect on the heart if blood flow through the coronary artery is restricted or completely blocked.

11. Point out three differences between artery and vein.

15. Which part of the human heart is considered as pacemaker ? Why is it so called ?

16. What is the role of blood pressure in circulation ?

17. Give the difference between plasma and lymph.

18. What is the difference between plasma and serum ?

19. Give the difference between pulmonary artery and pulmonary vain.

20. Which blood cell in human blood carries haemoglobin ? What is its average life span ?

22. Differentiate between systolic and diastolic pressure.

23. Give an account on different types of blood vessels.

24. Give the difference between pulmonary circulation and systemic circulation.

3. In this, blood completes its circulation from right ventricle to left auricle through the lungs.

18. because it transports the materials and help in survival of the organism.

19. In thoracic cavity between the lungs

20. due to presence of auriculo ventricular valves.

1. What would be the consequences of a deficiency of haemoglobin in our bodies ?

(a) Name the blood vessels labelled from 1 to 9.

(b) Which of these carry maximum oxyhaemoglobin ?

(c) Which of these contain highest concentration of amino acids and glucose soon after a meal ?

6. (a) Name the blood vessel that brings oxygenated blood to the human heart.

(b) Which chamber of human heart receives deoxygenated blood ?

(c) Describe how deoxygenated blood from this chamber is sent to all parts of the body.

7. Draw a diagram of the vertical section of human heart to show the internal structure. Label any one of the heart chambers and any other five parts.

9. Name the constituents of blood. Why are white blood corpuscles called 'Soldiers of the body' ?

The document Practice Questions: Transportation in Human Beings - 2 Notes | Study Science Class 10 - Class 10 is a part of the Class 10 Course Science Class 10.
All you need of Class 10 at this link: Class 10
Join Course