Coagulation has been defined as the addition of a positively charged ion such as Al3+, Fe3+ or catalytic polyelectrolyte that results in particle destabilization and charge neutralization.

Flocculation is the formation of clumps or flocs of suspended solids by agglomeration of smaller suspended particles.

Colloidal solutions that do not agglomerate naturally are called stable. This is due their large surface-to-volume ratio resulting from their very small size. In these small particles, molecular arrangements within crystals, loss of atoms due to abrasion of the surfaces, or other factors causes their surfaces to be charged. The colloids contained in the water are negatively charged at pH>pHiso and positively at pH<pHiso. These colloids are stable due to the repulsive forces between the negative charges. These colloids are destabilized by positively charged ions formed from the hydrolysis of coagulants. Destabilization of colloidal particles can be influenced by the  double layer compression, adsorption and charge neutralization, entrapment in precipitates (sweep flocculation) and interparticle bridging.

1. Double layer compression: The negative colloid and its positively charged atmosphere produce an electrical potential across the diffuse layer. This is highest at the surface and drops off progressively with distance, approaching zero at the outside of the diffuse layer and is known as Zeta potential.

2. Adsorption and charge neutralization: Inorganic coagulants (such as alum, Ferrous sulphate) often work through charge neutralization. When these metal based coagulants are added to water, it dissociates and metal ions formed. Fe2+/Al3+ are liberated, if ferrous salt/alum is used. Liberated Fe2+/Al3+ and OH– ions react to form various monomeric and polymeric hydrolyzed species.  The concentration of the hydrolyzed metal species depends on the metal concentration, and the solution pH. The percentage of Fe2+ and Al3+ hydrolytic products can be calculated from the following stability constants :

The speciation diagram of Fe2+ and Al3+ as drawn using above stability constants is presented in Figure 3.5.1 and Figure 3.5.2, respectively. 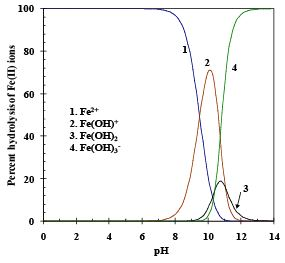 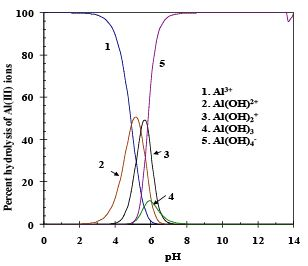 It can be seen from speciation diagram of Fe(II) ions that the dominant soluble species are Fe2+ and Fe(OH)3- at low and high pH, respectively. The hydrolysis constants for aluminum cover a very narrower range, and all of the aluminum deprotonations are ‘squeezed’ into an interval of less than 2 unit. Therefore, apart from a narrow pH region approximately 5.5–6.5, the dominant soluble species are Al3+ and Al(OH)4- at low and high pH, respectively.

Adsorption of the metal hydrolysed products on the colloid surface causes charge neutralization, which brings about van der Walls forces become dominant. Charge neutralization alone will not necessarily produce macro-flocs (flocs that can be seen with the naked eye). Micro-flocs (which are too small to be seen) may form but will not aggregate quickly into visible flocs. The polymeric hydrolyzed species possess high positive charges, and adsorbed to the surface of the negative colloids. This results in a reduction of the zeta potential to a level where the colloids are destabilized. The destabilized particles, along with their adsorbed hydro-metallic hydroxometallic complexes, aggregate by interparticulate Van der Waals forces. These forces are aided by the gentle mixing in water . When a coagulant forms threads or fibers which attach to several colloids, capturing and binding them together, this phenomenon is known as bridging. Some synthetic polymers and organic polyelectrolytes, instead of metallic salts, are used to assist interparticle bridging.

Adsorption sites on the colloidal particles can adsorb a polymer molecule. A bridge is formed when one or more particles become adsorbed along the length of the polymer. Bridge particles intertwined with other bridged particles during the process.

3. Sweep coagulation: Addition of relatively large doses of coagulants, usually aluminum or iron salts, which results in precipitation as hydrous metal oxides. Most of the colloids and some of dissolved solids are literally swept from the bulk of the water by becoming enmeshed in the settling hydrous oxide floc. This mechanism is often called sweep flocculation. Sweep floc is achieved by adding so much coagulant to the water that the water becomes saturated and the coagulant precipitates out. Then the particles get trapped in the precipitant as it settles down .