Question 1. A catchment may be idealised as a rectangle. There are three rain gauges located inside the catchment at arbitrary locations. The average precipitation over the catchment is estimated by two methods:     [2019 : 1 Mark, Set-I](i)    Arithmetic mean (PA), and(ii)   Thiessen polygon (PT). Which one of the following statements is correct?(a)    PA is always smaller than PT(b)    PA is always equal to PT(c)    There is no definite relationship between PA and PT(d)    PA is always greater than PT Answer: (c)Solution: The result from Thiessen polygon method is more accurate than arithmetic mean method. But there is no any close relationship between values obtained by Thiessen polygon method and Arithmetic mean method.∴ There is no any relation between PA and PT.Question 2. Rainfall depth over a watershed is monitored through six number of well distributed rain gauges. Gauged data are given below: 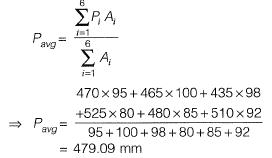 Question 3. A catchment is idealized as a 25 km x 25 km square. It has five rain gauges, one at each corner and one at the center, as shown in the figure. 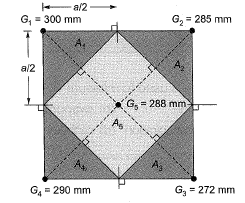 Let sides of square be, a = 25 km Now area of the polygon is calculated as, 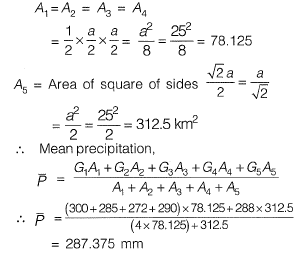