During precipitation, several processes occurs and the major steps are :

Initial mixing or interdispersing of components in the solution has a significant effect on the precipitation. Good mixing result in a more homogeneous product particularly in case of co- precipitation. Rate of stirring primarily affects the nucleation whereas growth rate is much less influenced by this factor. Stirring rate also affect the aggregation. Aggregate size can be influenced by changing the stirring rate and the manner of mixing. 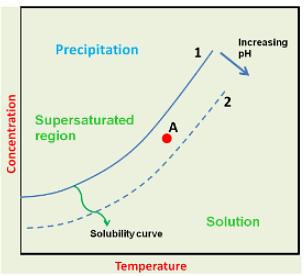 For nucleation to occur the solution must be super saturated with respect to the components which is to be precipitated. Parameters affecting supersaturation is shown in Fig. 1. In supersaturated region the system is unstable and precipitation occurs with any small disturbance. The supersaturaton region is approached either by increasing the concentration through evaporation, lowering the temperature or by increasing pH. The solubility of a component increases with temperature as shown in Fig. 1. The solubility curve is also function of pH. As pH increases solubility decrease and curve shift from 1 to position 2. Then the point which was initially in solution region becomes in supersatured region. The increase in pH is the most convenient method for precipitation. The reaction during precipitation,

, is controlled by increasing the pH through addition of a basic solution. Hence by raising the pH value of a solution by addition of alkaline or ammonium hydroxide the corresponding metallic hydroxide compounds can be made insoluble and precipitated from solution. Commonly used reagents are NaOH, KOH, NH4OH, carbonates and bicarbonates. Particles within supersaturated region develop in two steps : nucleation and growth.

Nucleation may proceed spontaneously through the formation of M(OH)n entities or be initiated with seed materials such as dust, particle fragments, roughness of vessels surface. Addition of seed material enhances rate of nucleation. The nucleus is defined as the smallest solid phase aggregate of atoms, molecule or ions which is formed during a precipitation and which is capable of spontaneous growth. For nucleation to start the solution need to be super saturated. Only when the concentration exceeds a critical threshold value a nucleus will form and the precipitation will begin. As long as the concentration of the species stays above the nucleation threshold, new particles are formed. Nucleation starts with the formation of clusters which are capable of spontaneous growth by the subsequent addition of monomers until a critical size is reached.  Cluster smaller than this size tends to re-dissolve, while larger cluster continues to grow. As soon as the concentration falls below the critical concentration due to consumption of the precursors by nucleation or by the growth process, only particle growth of existing particles continues. Growth proceed through adsorption of ions on surface of seeded particle. This growth is a function of concentration, temperature and pH. Rates of nucleation and growth can be independently controlled. If nucleation is faster than growth, the system produces a narrow distribution of small particles. Fast growth results in narrow distribution of large particles.

Several equations are proposed for nucleation rate and the most used is :

where β is the pre-exponential term, σ is solid –fluid interfacial energy,

is solid molecular volume and T is the temperature. The super saturation ‘s’ is defined as the ratio of actual concentration to solubility; s

The equation can be simplified as

There are several mechanisms of crystal growth and most of these lead to the simple equation of growth rate,

.  The ‘k’ is the kinetic coefficient, ‘c’ is the actual concentration and   ‘ceq’ is the equilibrium concentration. The exponent ‘n’ is usually only 1-2 and often close to 1. Hence the dependency of the crystallite growth rate on concentration is closer to a linear function while nucleation rate increases exponentially with concentration. Therefore high super-saturation level promote nucleation rather than crystal growth and favor the precipitation of highly dispersed materials. In contrast precipitation from the more dilute solution tends to produce fewer but larger crystals.

Apart from nucleation and crystal growth, aggregation is also an important step. Aggregation leads to fewer and larger but yet porous particles. It is the formation of clusters of nano-scale primary particles into micrometer scale secondary particles. Physical and chemical forces can hold these particles together. Porosity is then determined by how the particles are stacked and the pores are considered as void spaces between the primary particles. Because of very high super-saturation during the precipitation of most base metal hydroxides or carbonates, nucleation is spontaneous.

In a batch process, the salt solution from which the metal hydroxide is to be precipitated is taken in a vessel and the precipitating agent is added. The advantage of this method is its simplicity. However, variation of batch composition during precipitation process is a major limitation. This can lead to differences in the properties of the precipitate formed in the initial and final stages. The continuous process involves continual simultaneous addition of salt solution and precipitating agent to a vessel with simultaneous withdrawal of precipitate. This process has a higher demand on process control. All the parameters (pH, temperature, concentration, residence time) can be controlled as desired.

The order of addition of starting materials also affects the final properties of the precipitated catalysts. Different schemes of addition of starting materials in precipitation process is shown in Fig. 2.When metal solution is added to the precipitating agent, the product tend s to be homogeneous since the precipitating agent is present in large excess. This process is particularly important in co-precipitation as it give more homogeneous product than the process where the precipitating agent is added to a mixed metal solution. In the latter case, the hydroxide with lower solubility tends to precipitate first, resulting in formation of non-homogeneous product. Simultaneous addition of both reagents to a buffer solution of constant pH results in better homogeneity and process control. In this process, ratio of metal salt and precipitating agent can be controlled. However, product at the start and at the end may vary due to change in concentration of other ions that are not precipitated. These counter ions tend to occlude in larger extent in final products. Aging is also longer for final products. Aging represent time of formation of coprecipitated and its separation from solution. Aging results in change in structure and properties of hydroxide network. Aging leads to more crosslinked network.

Process parameters In addition to the process variations discussed above there are many other parameters that affect the final product properties as shown in Fig.2. The properties of the final product that are affected include phase formation, chemical composition, purity, particle size, surface area, pore size and pore volumes. It is necessary to optimize the parameters to produce desired products. 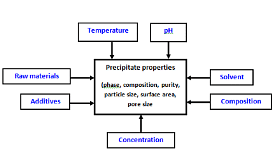 Fig. 3. Parameters affecting the properties of the precipitate

Effect of raw materials: The precursors are usually chosen with counter ions that can easily be decomposed to volatile products during heat treatment steps. Nitrates and carbonate salts are preferably used as metal precursors whereas ammonia or sodium carbonate as the precipitating agent. Chloride and sulphates ions act as poisons in many catalytic processes. Such ions should be avoided in the precipitation process. However if the precipitation is needed to be carried out in the presence of these ions then repeated washing steps are necessary to remove these ions from the precipitate.

Effect of pH: pH directly control the degree of super saturation and hence is expected to affect the final properties. But the influence of pH is not simple and has to be investigated experimentally for the specific system. In aluminium oxide system, the precipitation pH is one of the parameters that determines the phase formation. In general it has been found that precipitation in alkaline medium (pH > 8) leads to the formation of bayerite (β-Al(OH)3), while precipitation in more acidic conditions favors formation of boehmite (γ-AlO(OH)).

Effect of concentration and composition: It is desirable to precipitate at high concentration levels of metal ions. This increases the space time yields by decreasing the vessel volume for the same mass of precipitate. Moreover higher degree of super-saturation leads to faster precipitation. Higher concentration levels also results in smaller particle size and higher surface areas due to increased nucleation rates.

When use of high temperature is detrimental, the rotary evaporator is often used to remove the solvent from slurry solution. Rotary evaporator is a vacuum evaporator in which pressure is lowered above the slurry so that boiling point of the solvent is reduced and it can be removed without using excessive heating. In the evaporator a rotating evaporating flask is connected to vapor duct to draw off the vapor and thereby, reduce the pressure within evaporator system. Sample solution is gently heated in bath, usually water bath, to enhance the solvent removal. The separated solvent vapor can be condensed back using a condenser and collected in a separate flask.

Effect of Additives: Additives are substance which are not a necessary ingredients of a precipitation reactions. The properties of the precipitates can strongly be influenced by additives.  The most widely used additives are organic molecules which are added to the precipitate in order to control the pore structure. Such organic molecules can later be removed from the precipitate in the calcination step. A very promising route for the preparation of the high surface area oxides is the use of surfactants as additives. Removal of the surfactant by calcinations steps leaves a well defined pore network. The pore diameter can be adjusted in the range of 2-10 nm. These all are treated as trade secrets and details are not available in the public domain.

Two examples are discussed below.

SiO2-Al2O3 is used in catalytic cracking process and is also used as support for active metals in various applications. Preparation of dual oxides by coprecipitation is similar to precipitation of single oxide. At pH 6 (at 500C) the precipitation of both silica and alumina sols begins and gelation takes places.

NiO-Al2O3 is used for hydrogenation and methanation reactions. Although this catalyst can be produced by other route, coprecipitation method of preparation is also done to increase the intimate interaction between active metal and support. The sodium bicarbonate can be used as precipitating agent for formation of nickel aluminium hydroxyl carbonate with good homogeneity of final product.