LEARNING OUTCOMES At the end of this unit, you will be able to:

The price of a commodity and the quantity exchanged per time period depend on the market demand and supply functions and the market structure. The market structure characterises the way the sellers and buyers interact to determine equilibrium price and quantity. The existence of different forms of market structure leads to differences in demand and revenue functions of the firms. The market structure mostly determines a firm’s power to fix the price of its product. The level of profit maximising price is generally different in different kinds of markets due to differences in the nature of competition. As such, a firm has to closely watch the nature of the market before determining its equilibrium price and output. In this unit, we shall discuss the nature of four of the most important market structures namely, perfect competition, monopoly, monopolistic competition and oligopoly and how these market structures operate to determine short-run and long-run equilibrium price and quantity. We shall start our analysis with perfect competition.PERFECT COMPETITION FeaturesSuppose you go to a vegetable market and enquire about the price of potatoes from a shopkeeper. He says potatoes are for ₹ 20 per kg. In the same way, you enquire from many shopkeepers and you get the same answer. What do you notice? You notice the following facts:(i) There are large number of buyers and sellers in the potatoes market.(ii) All the shopkeepers are selling potatoes at ₹ 20 per kg.(iii) Product homogeneity i.e. all the sellers are selling almost the same quality of potatoes in the sense that you cannot judge by seeing the potatoes from which farmer’s field do they come from. Such type of market is known as perfectly competitive market.In general, a perfectly competitive market has the following characteristics:(i) There are large number of buyers and sellers who compete among themselves. The number is so large that the share of each seller in the total supply and the share of each buyer in the total demand is too small that no buyer or seller is in a position to influence the price, demand or supply in the market.(ii) The products supplied by all firms are identical or are homogeneous in all respects so that they are perfect substitutes. Thus, all goods must sell at a single market price. No firm can raise the price of its product above the price charged by other firms without losing most or all of its business. Buyers have no preference as between different sellers and as between different units of commodity offered for sale; also sellers are quite indifferent as to whom they sell. For example, most agricultural products, cooking gas, and raw materials such as copper, iron, cotton, and sheet steel etc. are fairly homogeneous. In addition, all consumers have perfect information about competing prices.(iii) Every firm is free to enter the market or to go out of it. There are no legal or market related barriers to entry and also no special costs that make it difficult for a new firm either to enter an industry and produce, if it sees profit opportunity or to exit if it cannot make a profit.If the above three conditions alone are fulfilled, such a market is called pure competition. The essential feature of pure competition is the absence of the element of monopoly. Consequently, business combinations of monopolistic nature are not possible. In addition to the above stated three features of ‘pure competition’; a few more conditions are attached to perfect competition. They are:(iv) There is perfect knowledge of the market conditions on the part of buyers and sellers. Both buyers and sellers have all information relevant to their decision to buy or sell such as the quantities of stock of goods in the market, the nature of products and the prices at which transactions of purchase and sale are being entered into.(v) Perfectly competitive markets have very low transaction costs. Buyers and sellers do not have to spend much time and money finding each other and entering into transactions.(vi) Under prefect competition, all firms individually are price takers. The firms have to accept the price determined by the market forces of total demand and total supply. The assumption of price taking applies to consumers as well. When there is perfect knowledge and perfect mobility, if any seller tries to raise his price above that charged by others, he would lose his customers.While there are few examples of perfect competition which is regarded as a myth by many, the agricultural products, financial instruments (stock, bonds, foreign exchange), precious metals (gold, silver, platinum) approach the condition of perfect competition.Price Determination under Perfect Competition Equilibrium of the Industry: An industry in economic terminology consists of a large number of independent firms. Each such unit in the industry produces a homogeneous product so that there is competition amongst goods produced by different units. When the total output of the industry is equal to the total demand, we say that the industry is in equilibrium; the price then prevailing is equilibrium price. A firm is said to be in equilibrium when it is maximising its profits and has no incentive to expand or contract production.As stated above, under competitive conditions, the equilibrium price for a given product is determined by the interaction of the forces of demand and supply for it as is shown in figure 14. 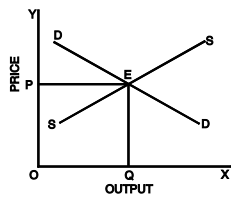 Fig. 14: Equilibrium of a competitive industry In Fig. 14, OP is the equilibrium price and OQ is the equilibrium quantity which will be sold at that price. The equilibrium price is the price at which both demand and supply are equal and therefore, no buyer who wanted to buy at that price goes dissatisfied and none of the sellers is dissatisfied that he could not sell his goods at that price. It may be noticed that if the price were to be fixed at any other level, higher or lower, demand remaining the same, there would not be equilibrium in the market. Likewise, if the quantities of goods were greater or smaller than the demand, there would not be equilibrium in the market.Equilibrium of the Firm: The firm is said to be in equilibrium when it maximizes its profit. The output which gives maximum profit to the firm is called equilibrium output. In the equilibrium state, the firm has no incentive either to increase or decrease its output.Firms in a competitive market are price-takers. This is because there are a large number of firms in the market who are producing identical or homogeneous products. As such these firms cannot influence the price in their individual capacities. They have to accept the price determined through the interaction of total demand and total supply of the commodity which they produce.This is illustrated in the following figure: 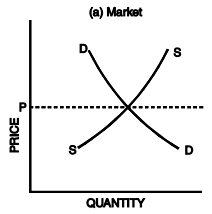 The market price OP is fixed through the interaction of total demand and total supply of the industry. Firms have to accept this price as given and as such they are price-takers rather than price-makers. They cannot increase the price above OP individually because of the fear of losing its customers to other firms. They do not try to sell the product below OP because they do not have any incentive for lowering it. They will try to sell as much as they can at price OP.As such, P-line acts as demand curve for the firm. Because it is a price taker, the demand curve D facing an individual competitive firm is given by a horizontal line at the level of market price set by the industry. In other words, the demand curve of each firm is perfectly (or infinitely) elastic. The firm can sell as much or as little output as it likes along the horizontal price line. Since price is given, a competitive firm has to adjust its output to the market price so that it earns maximum profit. Let us continue our example on page 4.163 in which demand and supply schedules for the industry were as follows:

Equilibrium price for the industry is determined through the interaction of demand and supply is ₹ 2 per unit. The individual firms will accept ₹ 2 per unit as the price and sell different quantities at this price. Let us consider the case of firm ‘X’. Firm X’s quantity sold, total revenue, average revenue and marginal revenue are as given in Table 4.Table 5: Trends in Revenue of a Competitive Firm

Firm X’s price, average revenue and marginal revenue are equal to ₹ 2. Thus, we see that in perfectly competitive market a price-taking firm’s average revenue, marginal revenue and price are equal. As a result, when the firm sells an additional unit, its total revenue increases by an amount equal to its price. AR = MR = Price.Conditions for equilibrium of a firm: As discussed earlier, a firm, in order to attain equilibrium position, has to satisfy two conditions as below: (Note that because competitive firms take price as fixed, this is a rule for setting output, not price)(i) The marginal revenue should be equal to the marginal cost. i.e. MR = MC. If MR is greater than MC, there is always an incentive for the firm to expand its production further and gain by selling additional units. If MR is less than MC, the firm will have to reduce output since an additional unit adds more to cost than to revenue. Profits are maximum only at the point where MR = MC. Because the demand curve facing a competitive firm is horizontal, so that MR = P, the general rule for profit maximization can be simplified. A perfectly competitive firm should choose its output so that marginal cost equals price.(ii) The MC curve should cut MR curve from below. In other words, MC should have a positive slope.Short-Run Profit Maximization by a Competitive FirmWe shall begin with the short-run output decision and then move on to the long run. In the short run, a firm operates with a fixed amount of capital and must choose the levels of its variable inputs so as to maximize profit. In figure 16, DD and SS are the industry demand and supply curves which intersect at E to set the market price as OP. The firms of perfectly competitive industry adopt OP price as given and considers P-Line as demand (average revenue) curve which is perfectly elastic at P. As all the units are priced at the same level, MR is a horizontal line equal to AR line. Note that MC curve cuts MR curve at two places T and R respectively. But at T, the MC curve is cutting MR curve from above. T is not the point of equilibrium as the second condition is not satisfied. The firm will benefit if it goes beyond T as the additional cost of producing an additional unit is falling. At R, the MC curve is cutting MR curve from below. Hence, R is the point of equilibrium and OQ2 is the equilibrium level of output.Short run supply curve of the firm in a competitive marketOne interesting thing about the MC curve of a firm in a perfectly competitive industry is that it depicts the firm’s supply curve. This can be shown with the help of the following figure: