Several instruments are available for pressure measurement, these instruments can be divided into pressure measuring devices and vacuum measuring devices. U-tube manometers are being replaced with smaller and more rugged devices, such as the silicon diaphragm. Vacuum measuring devices require special techniques for the measurement of very low pressures.➢ ManometersManometers are good examples of pressure measuring instruments, although they are not as common as they previously were, because of the development of new, smaller, more rugged, and easier to use pressure sensors [2].U-tube manometers consist of “U” shaped glass tubes partially filled with a liquid. When there are equal pressures on both sides, the liquid levels will correspond to the zero point on a scale, as shown in Figure 7.4(a). The scale is graduated in pressure units. When a higher pressure is applied to one side of the U-tube, as shown in Figure 7.4(b), the liquid rises higher in the lower pressure side, so that the difference in height of the two columns of liquid compensates for the difference in pressure.The pressure difference is given by:PR − PL = γ × difference in height of the liquid in the columns.....(7.7)where γ is the specific weight of the liquid in the manometer. 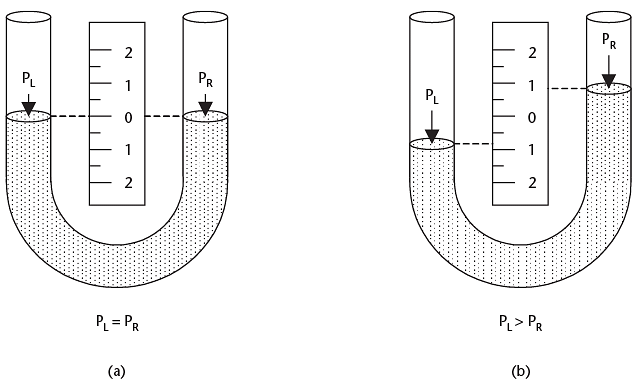 Figure 7.4 Simple U-tube manometers, with (a) no differential pressure, and (b) higher pressure on the left side.

➢ Diaphragms, Capsules, and BellowsGauges are a major group of sensors that measure pressure with respect to atmospheric pressure. Gauge sensors are usually devices that change their shape when pressure is applied. These devices include diaphragms, capsules, bellows, and Bourdon tubes.Diaphragms consist of a thin layer or film of a material supported on a rigid frame, as shown in Figure 7.5(a). Pressure can be applied to one side of the film for gauge sensing, with the other inlet port being left open to the atmosphere. Pressures can be applied to both sides of the film for differential sensing, and absolute pressure sensing can be achieved by having a partial vacuum on one side of the diaphragm. A wide range of materials can be used for the sensing film: from rubber to plastic for low pressures, silicon for medium pressures, and stainless steel for high pressures. When a pressure is applied to the diaphragm, the film distorts or becomes slightly spherical, and can be sensed using a strain gauge, piezoelectric, or changes in capacitance techniques. Older techniques included magnetic and carbon pile devices. In the device shown, the position of the diaphragm is sensed using capacitive techniques, and the measurement can be made by using an ac bridge or by using pulse-switching techniques. These techniques are very accurate, and excellent linear correlation between pressure and output signal amplitude can be obtained.

Figure 7.5 Cross section of (a) capacitive sensor, and (b) microminiature silicon pressure sensor.

Silicon diaphragms are now in common use. Since silicon is a semiconductor, a piezoresistive strain gauge and amplifier electronics can be integrated into the top surface of the silicon structure, as shown in Figure 7.5(b) (see also Figure 6.9). These devices have built-in temperature compensation for the strain gauges and amplifiers, and have high sensitivity, giving a high output voltage (5V FSD). They are very small, accurate (<2% FSD), reliable, have a good temperature operating range (−50° to 120°C), are low cost, can withstand high overloads, have good longevity, and are unaffected by many chemicals. Commercially made devices are available for gauge, differential, and absolute pressure sensing up to 200 psi (1.5 MPa). This range can be extended by the use of stainless steel diaphragms to 10,000 psi (70 MPa) [3].The cross section shown in Figure 7.5(b) is a differential silicon chip (sensor die) microminiature pressure sensor. The dimensions of the sensing elements are very small, and the die is packaged into a plastic case (0.2 in thick × 0.6 in diameter, approximately). The sensor is used in a wide variety of industrial applications, widely used in automotive pressure sensing applications (e.g., manifold air pressure, barometric air pressure, oil, transmission fluid, break fluid, power steering, tire pressure, and many other applications such as blood pressure monitors) [4].Capsules are two diaphragms joined back to back. Pressure can be applied to the space between the diaphragms, forcing them apart to measure gauge pressure. The expansion of the diaphragm can be mechanically coupled to an indicating device. The deflection in a capsule depends on its diameter, material thickness, and elasticity. Materials used are phosphor bronze, stainless steel, and iron-nickel alloys. The pressure range of instruments using these materials is up to 50 psi (350 kPa). Capsules can be joined together to increase sensitivity and mechanical movement, or, as shown in Figure 7.6, they can be connected as two opposing devices, so that they can be used to measure differential pressures. The measuring system uses a closed loop technique to convert the movement of the arm (pressure) into an electrical signal, and to maintain it in its neutral position in a force balance system. When there is a pressure change, movement in the arm is sensed by the linear variable differential transformer (LVDT), or other type of position sensor. The signal is amplified and drives an electromagnet to pull the arm back to its neutral position. The current needed to drive the electromagnet is then proportional to the applied pressure, and the output signal amplitude is proportional to the electromagnet’s current. The advantage of the closed loop control system is that any nonlinearity in the

mechanical system is virtually eliminated. This setup provides a high-level output, high resolution, good accuracy, and stability. The current to the electromagnet can be a varying amplitude dc, or a pulse width modulated current that easily can be converted to a digital signal.Bellows are similar to capsules, except that instead of being joined directly together, the diaphragms are separated by a corrugated tube or a tube with convolutions, as shown in Figure 7.7. When pressure is applied to the bellows, it elongates by stretching the convolutions, rather than the end diaphragms. The materials used for the bellows type of pressure sensor are similar to those used for the capsule, giving a pressure range for the bellows of up to 800 psi (5 MPa). Bellows devices can be used for absolute, gauge, and differential pressure measurements.Differential measurements can be made by mechanically connecting two bellows to be opposing each other when pressure is applied to them, as shown in Figure 7.7. When pressures P1 and P2 are applied to the bellows, a differential scale reading is obtained. P2 could be atmospheric pressure for gauge measurements. The bellows is the most sensitive of the mechanical devices for low-pressure measurements (i.e., 0.5 to 210 kPa).

➢ Bourdon TubesBourdon tubes are hollow, flattened, or oval cross-sectional beryllium, copper, or steel tubes, as shown in Figure 7.8(a). The flattened tube is then shaped into a three-quarter circle, as shown in Figure 7.8(b). The operating principle is that the outer edge of the cross section has a larger surface than the inner portion. When pressure is applied, the outer edge has a proportionally larger total force applied because of its larger surface area, and the diameter of the circle increases. The walls of the tube are between 0.01 and 0.05 in thick. The tubes are anchored at one end. When pressure is applied to the tube, it tries to straighten, and in doing so, the free

end of the tube moves. This movement can be mechanically coupled to a pointer, which will indicate pressure as a line-of-sight indicator, or it can be coupled to a potentiometer, which will give a resistance value proportional to pressure as an electrical signal. The Bourdon tube dates from the 1840s. It is reliable, inexpensive, and one of the most common general-purpose pressure gauges.Bourdon tubes can withstand overloads of up to 40% of their maximum rated load without damage, but, if overloaded, may require recalibration. The Bourdon tube is normally used for measuring positive gauge pressures, but also can be used to measure negative gauge pressures. If the pressure to the Bourdon tube is lowered, then the diameter of the tube reduces. This movement can be coupled to a pointer to make a vacuum gauge. Bourdon tubes can have a pressure range of up to 10,000 psi (70 MPa) [5].Bourdon tubes also can be shaped into helical or spiral shapes to increase their range. Figure 7.9(a) shows the Bourdon tube configured as a spiral, and Figure 7.9(b) shows a tube configured as helical pressure gauge. These configurations are more sensitive than the circular Bourdon tube, and extend the lower end of the Bourdon tube pressure range from 3.5 kPa down to 80 Pa.

➢ Other Pressure SensorsBarometers are used for measuring atmospheric pressure. A simple barometer was the mercury in glass barometer, which is now little used due to its fragility and the toxicity of the mercury. The aneroid (no fluid) barometer is favored for direct reading [e.g., the bellows in Figure 7.7, or the helical Bourdon tube in Figure 7.9(b)], and the solid state absolute pressure sensor is favored for electrical outputs.A Piezoelectric pressure gauge is shown in Figure 7.10. Piezoelectric crystals produce a voltage between their opposite faces when a force or pressure is applied to the crystal. This voltage can be amplified, and the device used as a pressure sensor. To compensate for the force produced by the weight of the diaphragm when the 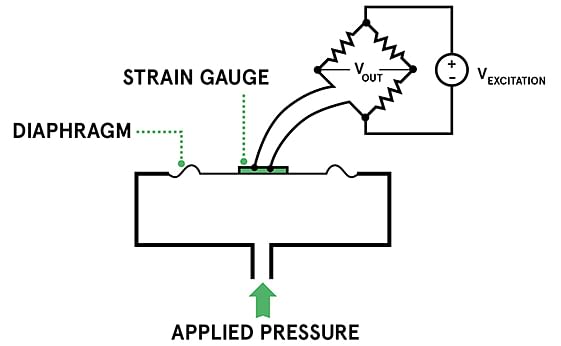 sensor is moving or its velocity is changing (e.g., if vibration is present), a seismic weight or mass is sometimes used on the other side of the piezoelectric crystal to the diaphragm [6]. Piezoelectric devices have good sensitivity, a wide operating temperature (up to 300°C), and a good frequency response (up to 100 kHz), but are not well suited for low frequency (less than 5 Hz) or for dc operation, due to offset and drift caused by temperature changes (pyroelectric effect). Piezoelectric devices are better suited for dynamic rather than static measurements.

➢ Vacuum InstrumentsVacuum instruments are used to measure pressures less than atmospheric pressure. Bourdon tubes, diaphragms, and bellows can be used as vacuum gauges, but they measure negative pressures with respect to atmospheric pressure. The silicon absolute pressure gauge has a built-in low-pressure reference, so it is calibrated to measure absolute pressures. Conventional devices can be used down to 20 torr (5 kPa), and this range can be extended down to approximately 1 torr with special sensing devices.Ionization gauges can be used to measure pressures from 10−3 atm down to approximately 10−12 atm. The gas is ionized with a beam of electrons and the current is measured between two electrodes in the gas. The current is proportional to the number of ions per unit volume, which is also proportional to the gas pressure. An ionization gauge is shown in Figure 7.11(a) [7].

Figure 7.11 Vacuum pressure gauges: (a) Ionization pressure gauge, and (b) Pirani gauge.The Pirani gauge is shown in Figure 7.11(b). With special setups and thermocouples, the Pirani gauge can measure vacuums down to approximately 1 torr (10−3 atm). These methods are based on the relation of heat conduction and radiation from a heating element, to the number of gas molecules per unit volume in the low-pressure region, which determines the pressure.The McLeod gauge is a device set up to measure low pressures (1 torr). The device compresses the low-pressure gas to a level at which it can be measured. The change in volume and pressure then can be used to calculate the original gas pressure, providing the gas does not condense.