Q.2. Do action and reaction act on the same body or on different bodies? Explain your answer with the help of example. How are they related in magnitude and direction? Write the total momentum of the gun and the bullet before firing.    [CBSE 2016]Ans. Action and reaction forces act on two different bodies. For example, when a person swims in water, he applies backward push of action on water. In turn, the water exerts a forward reaction force on the swimmer due to which he swims forward.The magnitude of action and reaction forces are exactly equal but their directions are mutually opposite.Total momentum of the gun and the bullet system before firing is zero.

Q.3. The velocity-time graph of a car of 1000 kg mass is given alongside. From the graph answer the following:    [CBSE 2010, 2016](а) When is the maximum force acting on the car? Why?(b) What is the retarding force?(c) For how long is there no force acting?Ans. (a) In the v-t graph, the OA part represents uniformly accelerated motion with an acceleration

∴ Force in this region is maximum having a value 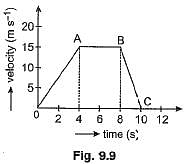 but on reducing time to half, the new rate of change of momentum will be

Q.13. A runner presses the ground with his feet before he starts his run. Identify action and reaction in this situation.    [CBSE 2015]Ans. The force applied by runner on ground is action force. Reaction force of ground acts on runner and pushes him forward.Q.14. Out of the four physical quantities associated with the motion of an object viz force, velocity, acceleration and momentum which one remains constant for all bodies large or small, undergoing a free fall?    [CBSE 2015]Ans. During free fall, the body accelerates. Thus velocity and momentum increase at every point of motion.Acceleration remains constant. Thus force also remains constant (as F = ma).Q.15. How are action-reaction forces related in magnitude and direction?    [CBSE 2015]Ans. They have the same magnitude but different directions.Q.16. A stone released from the top of a tower of height 19.6 m. Calculate its final velocity just before touching the ground.    [CBSE 2015]Ans. Given u = 0, s = 19.6 m, g = 9.8 m s-2.

Short Answer QuestionsQ.1. (a) State the reason why a bullet of small mass fired from a gun kills a person.(b) A bullet of mass 4 g fired with a velocity of 50 m s-1 enters a wall up to a depth of 10 cm. Calculate the average resistance offered by the wall.(c) How will the depth of penetration into the wall change if a bullet of mass 5 g strikes against it with a velocity of 40 m s-1? Give reason to justify your answer.    [CBSE 2016]Ans. (a) Although mass of a bullet is small but its momentum is very large on account of its extremely large velocity. When a bullet hits a person this large momentum is transferred to the person within a very short time and thus produces a large force and may kill the person.(b) Here mass of bullet m = 4 g = 0.004 kg, initial velocity u = 50 m s-1, final velocity v = 0 and distance covered in wall s = 10 cm = 0.1 m.As per relation v2 - u2 = 2 as, the acceleration

Average resistance force offered by wall F = ma = 0.004 x (- 12500) = - 50 N(c) Depth of penetration will decrease because initial velocity of bullet is less but magnitude of retardation due to the wall remains unchanged.Q.2. If you are trying to push a heavy box on a horizontal surface, list various forces on the box. State the condition under which this box will start sliding on the surface. How will the magnitude of applied force required to move the box change if:(i) weight of the box is increased,(ii) the surface on which the box is placed is made more rough?    [CBSE 2016]Ans. Various forces acting on the box are:(i) Its weight ‘W acting vertically downward, (ii) reaction force 'R’ due to horizontal, surface, (iii) force of push 'F’ and (iv) frictional force 'f’. Forces have been shown in Fig. 9.13.

The document Previous Year Questions Answers - Force and Laws of Motion Notes | Study Science Class 9 - Class 9 is a part of the Class 9 Course Science Class 9.
All you need of Class 9 at this link: Class 9
Join Course