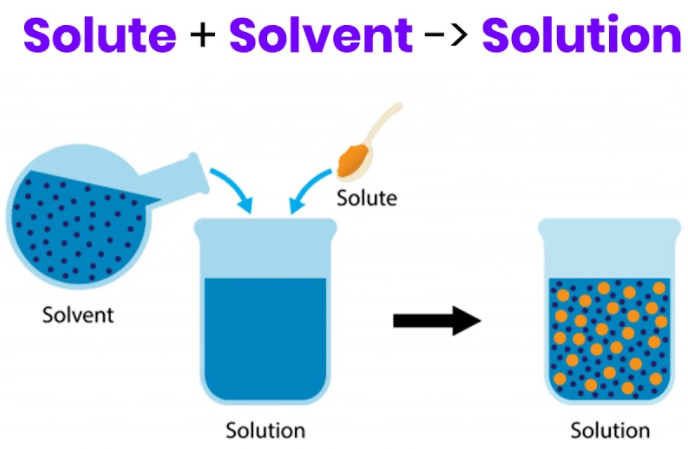 Q.2. Name a process by which pure solid can be separated from solution in crystal form. [NCT 2019]Ans. CrystallizationQ.3. Name the process by which cream is separated from milk. [NCT 2018]Ans. CentrifugationQ.4. Air is a chemical compound or a mixture? Support your answer with suitable facts. [NCT 2018]Ans. Air is a mixture having nitrogen and oxygen as the main components.The following facts support that air is a mixture:

Q.5. Why is crystallization better than evaporation for the separation of mixtures? [CBSE 2016]Ans.

Q.7. List four properties of nonmetals. Give two examples. [CBSE 2016]Ans. Properties of non-metal:(i) They show a variety of colors.(ii) They are poor conductors of heat and electricity.(iii) They are not malleable or ductile.(iv) They are not lustrous or sonorous.Example: Sulphur and phosphorus.Q.8. Name the separation technique by which we can obtain colored components from ink. Give two more applications of the technique used. [CBSE 2016]Ans. The technique used to separate colored components of ink is called chromatography.Applications of chromatography:(i) To separate a mixture of components soluble in the same solvent.(ii) To separate mixtures of vitamins and amino acids.Q.9. Explain the term centrifugation? Give one of its applications. [CBSE 2016]Ans. Churning at high speed, denser particles settle at the bottom separating cream from milk.Application: Washing machines and urine tests.Q.10. Write down the processes involved in sequential order to get the supply of drinking water to your home from the waterworks. [CBSE 2016]Ans. Reservoir → Sedimentation tank → Loading tank → Filtration tank → Chlorination kills bacteria → To Home.

Q.11. Two students A and B were given 10 ml of water in a bowl and a plate respectively. They were told to observe the rate of evaporation. Name the student whose water evaporates faster and explain its reason. [CBSE 2016]Ans.

Q.12. Why is the inter-conversion of states of matter considered a physical change? Give three reasons to justify your answer. [CBSE 2016]Ans. The interconversion of states of matter is considered a physical change because:(i) It occurs without a change in composition.(ii) The substances differ in physical properties but chemically they are the same.Example: Water changes into ice below 0°C. Ice changes into liquid above 0°C. Liquid water changes into steam at 100°C.Physical states of water are different due to different forces of attraction and intermolecular spaces, but the composition is the same, i.e. all of them contain same water molecules.(iii) No new substance with new properties will form.Q.13. (a) Define an element.(b) What is meant by malleability? Name any two substances that are malleable. [CBSE 2016]Ans. (a) Element is a substance that is made up of only one kind of atom.(b) Malleability is a property due to which a metal can be beaten into sheets.Example: Gold and Silver.

Q.14. Describe an activity to show that particles of matter have spaces between them. [CBSE 2015]Ans. The activity is performed as under:(i) Take a 100 mL beaker.(ii) Fill half of the beaker with water and mark the level of water with a pen.(iii) Dissolve about 5 g of salt into the water with the help of a glass rod.(iv) Observe the change in the level of water.

(a) Two differences between chemical change and physical change:

(i) No new substance is formed in a physical change.Example: When the ice melts into water, it is a physical change because ice and water are the same substances chemically.But in a chemical change, a new substance is formed which has properties different from reactants.Example: When Iron and Sulphur are heated, iron sulphide is obtained having properties different from Iron and Sulphur.

Q.20. Differentiate between an element and a compound (any two-point). Write one example of each. [CBSE 2015]Ans.

Q.21. (a) Name the separation technique you would follow to separate:(i) Dyes from black ink(ii) A mixture of salt and ammonium chloride(iii) Cream from milk(iv) Sodium chloride from its solution in water(b) State the principle used in separating a mixture of two immiscible liquids. [CBSE 2015]Ans. (a) (i) Chromatography(ii) Sublimation(iii) Centrifugation(iv) Evaporation(b) The principle used in the separation of immiscible liquids by separating funnel, based on the difference in their densities. The heavier liquid will form the lower layer, which will get separated first. The lighter liquid will form the upper layer, so it will get separated later.Q.22 Why copper sulphate solution in water does not show Tyndall effect but a mixture of water and milk shows. [CBSE 2015]Ans.

Q.1. Rahul’s mother mixed oil and water in the kitchen by mistake. Rahul told her that he can separate the mixture. Name the technique used by Rahul and explain how he will do it. Draw the diagram and write the principle of this technique. [CBSE 2016]Ans. 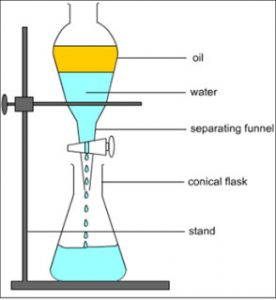 (iv) When the stop cock of the separating funnel is opened, water will come out.(v) Close the stop cock.(vi) When the stop cock is opened again, the oil will come out and both will get separated.(vii) This process is based on the principle of difference in the density of two liquids.Q.2. Write your observation when the following processes take place.(a) An aqueous solution of sugar is heated till it gets dried up.(b) A saturated solution of KCl at 60°C is allowed to cool at room temperature.(c) A mixture of iron filings and Sulphur powder is heated strongly.(d) A beam of light is passed through a colloidal solution.(e) Dil. HCI is added to a mixture of iron filings and sulphur powder. [CBSE 2015,2014]Ans. (a) Sugar remains as a residue in the form of solid mass.(b) Crystal of KCI are formed.(c) A black coloured solid called iron sulphide is formed.(d) The path of light becomes clearly visible due to the scattering of light by colloidal particles.(e) A colorless and odorless hydrogen gas is evolved.Q.3. The boiling point of alcohol is 78°C and that of water is 100°C. Explain the separation technique will you use to separate them from a mixture? Which liquid will be separated first and which will be left behind? Draw a diagram to show the apparatus and the setup used in the process. [CBSE 2015]Ans. The process used is distillation. It is a double process of evaporation followed by distillation. 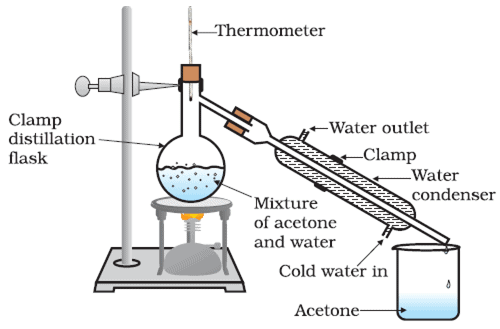 (i) Take a mixture of alcohol and water in the distillation flask.(ii) Set the apparatus as shown in the diagram.(iii) Start the flow of water into the condenser.(iv) Start heating with the help of the burner.(v) Note down the continuous temperature.(vi) At 78 °C, alcohol will change into vapour completely and get the condenser to get pure alcohol.Alcohol will be separated first, whereas water will be left behind.Q.4. (a) You are given a mixture of sand, water, and mustard oil. How will you separate the components of this mixture? Explain it with the help of different separation methods involved in it.(b) Give a flow diagram showing the process of obtaining gases from the air. [CBSE 2015,2011]Ans. (a) 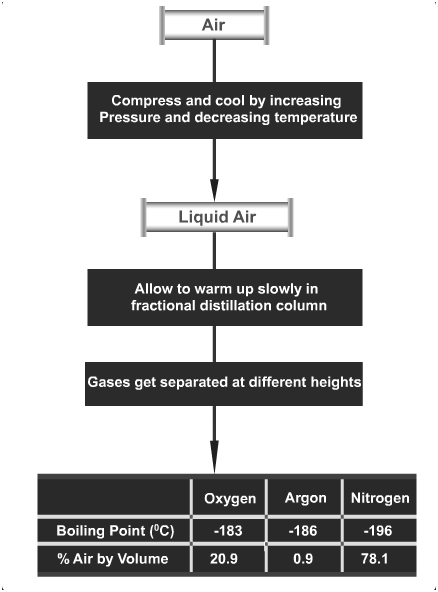 Q.5. Show diagrammatically how water is purified in the waterworks system and list the processes involved. [CBSE 2015]Ans.