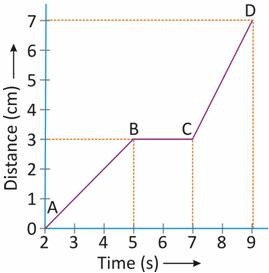 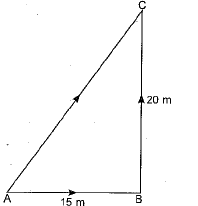 Speed-time graphs for motorcycles A arid B have been plotted in Fig. 8.27.Distance covered by motorcycle AsA = area OPQ 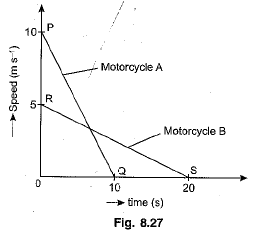 Thus, both motorcycles travelled equal distances before coming to a stop.Q.18. Answer the following questions:(i) State the type of motion shown by a freely falling stone.(ii) When a stone is thrown vertically upwards its velocity is continuously decreases. Why?(iii) Give an example of a motion in which average velocity is zero, but the average speed is not zero.    [CBSE 2015]Ans. (i) Motion of a freely falling stone is an uniformly accelerated motion.(ii) When a stone is thrown vertically upwards, a constant acceleration due to gravity acts on it in the downward direction. It causes a retardation. So, velocity of stone continuously goes on decreasing.(iii) Let a person goes from station A to station B and then returns back to station A covering a finite distance in certain time. Here average speed of person is finite. However, his average velocity is zero because there is no net displacement of the person.Q.19. Name the type of motion in which a body has uniform speed but not uniform velocity?    [CBSE 2010, 2015]Ans. Uniform circular motion.Q.20. What is the numerical ratio of average velocity to average speed of an object when it is moving along a straight path?    [CBSE 2013, 2015] Ans. For motion along a straight path in a given direction the magnitude of average velocity is same as average speed and hence the numerical ratio is 1. 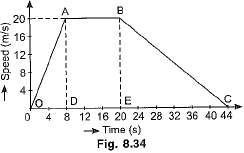 (a) What type of motion is represented by OA?(b) What type of motion is represented by AB?(c) Calculate the retardation of the body.(d) Calculate the distance travelled by the body from O to C.(e) What is the average velocity of the body for its entire journey?    [CBSE 2016]Ans. (a) OA represents uniformly accelerated motion.(b) AB represents uniform motion without any acceleration.(c) BC represents the retarded motion, in which magnitude of retardation

(d) Distance travelled by the body from O to C, s = area of the trapezium OABC

(e) Average velocity of the body for entire journey = 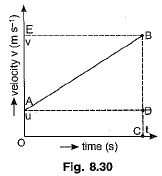 From the velocity-time graph, the acceleration of the object is given by

∴ at = v - u ⇒ v = u + at(b) According to velocity-time graph the total distance covered by the object is obtained by the area under the graph.Hence, distance s travelled by the object = area of the trapezium OABC= area of rectangle OADC + area of triangle ADB s = area of the trapezium OABC

...(ii)Substituting value of time t from equation (ii) into (i), we get 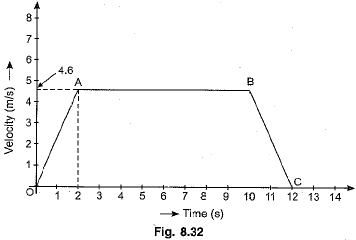