The document Previous Year Questions - Biomolecules (IIT - JEE Advanced) JEE Notes | EduRev is a part of the JEE Course Chemistry for JEE Advanced.
All you need of JEE at this link: JEE

Q 1. Give the structures of the products in the following reaction Sucrose

(iv) B is more hydrophobic due to presence of larger organic gp., benzyl gp. (C6H5CH2-).

Q 5. Write down the heterogeneous catalyst involved in the polymerization of ethylene.      [IIT 2003]

and it is formed by the condensatoin between —NH2 group and —COOH group as follows :

In given amino acids liosine and glutamine the two possible dipeptides are formed as follows: 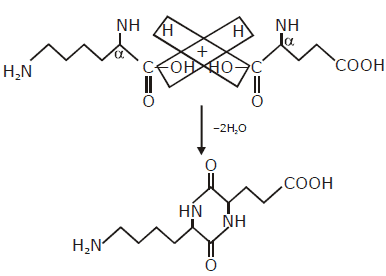 (ii) When α-NH2 of both amino acids is used but in one terminal —COOH gp. lacking α-NH2 gp. is used. (a) Draw the structure of L-glucose

(b) Give the reaction of L-glucose with Tollen’s reagent

Ans. (a) The structure of L-glucose can be drawn by reversing the position of H and OH at the second last C-atom of D-glucose given i.e., Hence structure of L-glucose will be :

Position of H and OH at C* is opposite to that in D.

(b) With Tollen's reagent the terminal —CHO group oxidised to —COOH group as : 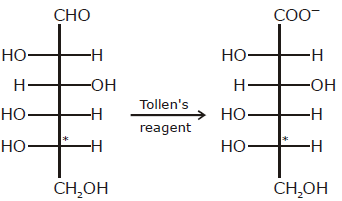 Q 8. Which of the following disaccharide will not reduce Tollen’s reagent ? Lone pairs of electrons in malamine is 6.

Q 14. A tetrapeptide has –COOH group on alanine. This produces glycine (Gly), valine (Val), phenyl alanine (Phe) and alanine (Ala), on complete hydrolysis. For this tetrapeptite, the number of possible sequencess (primary structures) with –NH2 group attached to a chiral center is        IIT(Advance) 2013]

(Glycine has no chiral centre)