The document Previous Year Questions Chapter 1 – Development, Class 10, SST | EduRev Notes is a part of the Class 10 Course Social Studies (SST) Class 10.
All you need of Class 10 at this link: Class 10

Q.1. On the basis of the given table answer the following questions:

(a) Calculate the average income of country A and B.(b) Are both the countries equally developed?(c) Which country is better and why?Ans.(a) Average income of country A is– (9500+ 10500+ 9800 + 10000+ 10200)/5 = Rs. 10,000Average income of country B is– (500 + 500 + 500 + 500 + 48000)/5 = Rs. 10,000(b) No– Both the countries are not equally developed(c) Country ‘A’ is better because distribution of income is more or less equal.Q.2. In what respect is the criterion used by UNDP for measuring development different from the one used by the World Bank?Ans. The World Bank uses ‘‘Per capita’’ income as the sole criterion for measuring development of countries where as the UNDP uses many criteria such as health status, education status as well as per capita income for measuring development. (a) Construction of roads, railways, generating electricity, developing ports etc. These are used by people so they have to be developed. (b) Providing essential goods at cheap rates or below their cost price so that even poor people can afford them. Such activities have to be undertaken by the government.(c) Providing adequate health and education facilities to each and every citizen is a primary duty of any government. Such services are essential because a healthy and educated citizen is an asset for the country.(d) Providing safe drinking water, housing and nutritious food to children etc., are other such public facilities which are essential.Q.4. What are the two basic criteria used for comparing an underdeveloped country with a developed one?Ans. The two criteria are(a) On the basis of per capita income: In the 2006 World Development Report, this criterion was used for classifying countries. Countries with per capita income of Rs. 4,53,000 per annum and above in 2004, were called rich countries and those with per capita income of Rs. 37,000 or less were called low-income countries.(b) On the basis of Human Development Index:- According to this criteria the countries are ranked on the basis of life expectancy, literacy rate and health status etc.Q.5. What do you mean by Human Development Index? What are its three components?Ans. Human Development Index means the criteria developed by the UNDP to compare the countries' development.The main components of the Human Development Index are(i) Educational levels of the people.(ii) Health status of the people.(iii) Per capita income.

Q.6. Why is sustainability important for development? Give two suggestions to achieve the sustainability of development. Ans. Sustainability is very important for development because if all development activities are carried out without paying attention to environment and other natural factors then development itself will become a danger for mankind. For example, if forests are cut relentlessly then global warming will destroy everything on the Earth. In that scenario what would be the use of development!To achieve sustainability-(a) we must be less dependent on non-renewable resources.(b) we must live according to natural conditions and use natural produce as far as possible.Q.7. How does World Bank classify different countries? Is it an adequate indicator?Ans. World Bank classifies different countries on the basis of per capita income. They are(a) Rich countries: Whose average per capita income is Rs 4,53,000 or more.(b) Poor Countries: Whose average per capita income is less than Rs 37,000.This indicator is inadequate as it does not provide full picture of development. This gives poor people a notional amount of money which actually does not belong to them.Q.8. What is development? What are the two aspects of development?Ans. Development is a positive growth/change in economy, social and political aspects of the country. Along with money there are other aspects too like education and other social aspects like individual freedom, democracy, gender equality which are not available in those countries.Q.10. Explain the concepts of Human Development Index (HDI) and that of the per capita income.Ans. Both Human Development Index and Per Capita Income, measure the status of countries' development but both are quite different from each other.(a) Human Development Index: Prepared by the U.N.D.P. It consists of health status, educational status and per capita income to determine the development of the country.(b) Per Capita: This criterion is used by the World Bank to determine development. It divide countries into rich and poor. The countries whose per capita income is more than Rs. 4,53,000 are called rich and those whose income is below Rs. 37,000 are called poor.Q.11. Answer the following questions on the basis of the table given below:State Infant Mortality Rate (2003) Literacy Rate (%) (2001) (a) Name anyone country whose Per Capita Income is more than that of India and by how much?(b) What is the HDI Rank of India in the World?Ans. (a) Sri lanka, its per capita income is Rs 1251 more than that of India.(b) India’s H.D.I. rank is 129th in the world.Q.14. Study the table given below and answer the following questions. 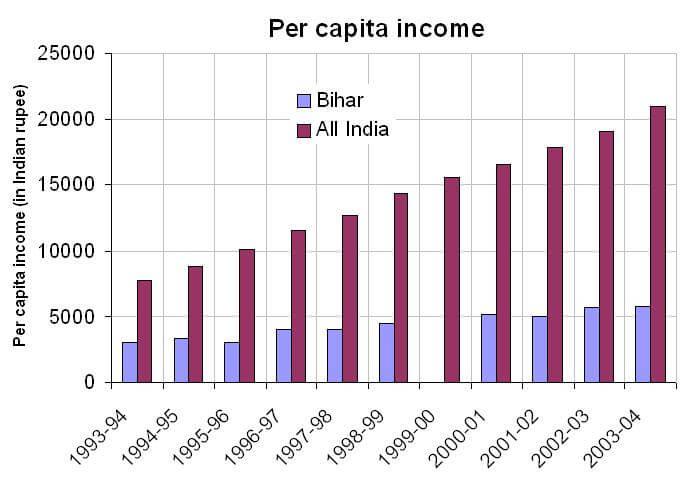 (b) Punjab has the highest per capita income because agricultural and industrial development is the main aspect of Punjab Economy.Q.15. How can more jobs be created in the field of education? Give any three reasons.Ans. More jobs can be created in the field of education:(a) In India only 65% people are literate. It means to provide good education to every Indian, there is a requirement for having more schools.(b) More school means more number of teachers required. This means more jobs.(c) More schools will necessitate thousands of supporting staff (like office staff). This will lead to more jobs. In that way more jobs will be created.Q.16. Mention any three characteristics of development.Ans.(a) Different persons can have different developmental goals.(b) What may be development for one may not be development for the other. It may be even destructive for the other.(c) For development people look at a mix of goals.Q.17. ‘For development people look at a mix of goals.’ Support the statement with suitable examples.Ans. It is true that if women are engaged in paid work, their dignity in the household and society increases. However, it is also the case that if there is respect for women there would be more sharing of household work and a greater acceptance of women working outside. A safe and secure environment may allow more women to take up a variety of jobs or run a business.Q.18. Why Kerala has a better human development ranking than Punjab in spite of lower per capita income?Ans. Kerala has lower per capita income but better human development ranking than Punjab because of many factors. Kerala has the highest literacy rate in the country. The Infant Mortality Rate of Kerala (11) is much less than Punjab (49). Net Attendance Ratio of Kerala (91) is higher than that of Punjab (81). Kerala has better health and educational infrastructure than Punjab. Kerala also has better public facilities.