The document Previous Year Questions Chapter 3 – Money and Credit, Class 10, SST | EduRev Notes is a part of the Class 10 Course Social Studies (SST) Class 10.
All you need of Class 10 at this link: Class 10

Q.1. What do the banks do with the 'Public Deposits'? Describe their working mechanism. [2008]

Ans. Banks accept deposits from the Public and use the major portion of these deposits to extend loans. There is a huge demand for loans for various economic activities. Banks make use of these deposits to meet the loan requirement of the people and thereby earn interest. This is, in fact, the main source of income of the bank. In this way, bank acts as a mediator between those who have surplus funds (the depositors) and those who are in need of these funds (the borrowers). Banks charge a higher interest rate on loans than what they offer on deposits.

Ans. People with surplus money or extra amount deposit it in banks. The banks keep the money safe and give an interest on it. The deposits can be drawn at any time on demand by the depositors. That is why they are called 'demand deposits'.(i) The demand deposits encashable by issuing cheques have the essential features of money.(ii) They make it possible to directly settle payments without the use of cash.(iii) Since demand drafts/cheques are widely accepted as a means of payment along with currency, they constitute money in the modern economy.

Informal sector loans include loans from moneylenders, traders, employers, relatives, friends etc. Features for informal sector loans are :(i) Their credit activities are not governed by any organisation, therefore they charge higher rate of interest.(ii) Informal sector loan providers know the borrowers personally, and hence they provide loans on easy terms without collateral and documentation.

Q.2. What are the two main reasons for formal credit not being available to the rural poor ? Why is there a need to expand rural credit ? [2011 (T-2)]

Ans. The two main reasons for formal credit not being available to rural poor are :(i) Absence of collateral and documentation is the main reason which prevents rural poor from getting bank loans.(ii) The arrangements of informal sector loans are flexible in terms of timelines, procedural requirements, interest rates etc. They are adjustable according to the needs and convenience of the borrower.There is a need to expand rural credit from the side of formal sector because :(i) Informal sectors exploit rural poor by putting them in debt-traps.(ii) Cheap and affordable credit for rural poor is important for the country’s overall development.

Q.3. Why do the rural borrowers depend on the informal sector for credit? What steps can be taken to encourage them to take loans from the formal sources ? Explain any two. [2011 (T-2)]

Ans. The rural borrowers depend on the informal sector for credit because :(i) Absence of collateral and documentation with rural borrowers.(ii) Flexible loans in term of timelines, interest rates, procedural requirements etc. are provided to rural borrowers by informal sectors.Steps that can be adopted to encourage them to take loans from the formal sources are :(i) Awareness among rural borrowers against the exploitation of informal sectors. Need to aware them regarding high rate of interest and debt traps made by such moneylenders.(ii) Promotion to self-help groups. These groups collect their savings as per their own ability to save. Members can take small loans from the groups to meet their requirements. If the group is regular in savings for year or two, it can avail loan from the bank.

Q.4. ‘Cheap and affordable credit is crucial for the country’s development’. Explain the statement with four points. OR Why do we need to expand formal source of credit in India ? Explain any four reasons. [2011 (T-2)]

Ans. If the loans are cheap and affordable, this can lead to countries development in the following ways :(i) Cheap loans results in higher incomes and higher profits which can help in the expansion of business.(ii) More and more people can be benefited by the loans in their businesses.(iii) This can help in making more and more agricultural activities, small-scale industries etc. Credit can be distributed more equally which helps in benefiting the poor by the help of cheaper loans.

(a) Banks provide loans after collateral and documentation securities, which generally the small farmers failed to comply with. Therefore, banks are unwilling to lend loans to small farmers.(b) There are several informal sources of credit like landlords, moneylenders, traders, relatives and friends etc.(c) Terms of informal credit can put the small farmers into debt-traps. Higher rate of interest and unfavourable conditions exploit farmers by the situation of multiple loans.(d) Farmers can get cheap and safe loans from formal credit providers i.e., banks and cooperative societies.

Ans. Terms of credit are the requirements need to be satisfied for any credit arrangements. It includes interest rate, collateral, documentation and mode of repayment. However the terms of credit vary depending upon the nature of lender, borrower and loan.

Q.8. How does the Reserve Bank of India supervise the functioning of banks? Why is this necessary? [2011 (T-2)]

Ans. Reserve Bank of India (RBI) supervised the banks in the following ways :(i) It monitors the balance kept by banks for day-to-day transactions.(ii) It checks that the banks give loans not just to profit-making businesses and traders but also to small borrowers.(iii) Periodically banks have to give details about lending, borrowers and interest rate to RBI. It is necessary for securing public welfare. It avoids the bank to run the business with profit motive only. It also keeps a check on interest rate of credit facilities provided by bank. RBI makes sure that the loans from the banks are affordable and cheap.

Ans. The features of Self-Help Group (SHG) are :(i) People form their personal groups for the purpose of savings and also lend money among themselves.(ii) Rate of interest is lower than informal service providers.(iii) They can also avail loans from banks if their savings are regular.(iv) Decisions regarding the savings and loan activities are taken by group members.

Ans. Things exchanged for other things without the use of money is known as barter system. The barter system laid the foundation of trade but trade was limited to the bounds of a village or town. Hence, in a barter system when both the parties agree to sell and buy each others commodities, it is known as double coincidence of wants. Whatever commodity a person desires to sell is exactly what commodity the other wishes to buy. Without double coincidence of wants exchange of goods is not possible. Therefore, it is an essential feature. Money eliminates the need of double coincidence of wants. One can easily exchange their goods in exchange of money and later on pay money for the desired commodities. Money acts as a intermediate in the process of exchange, it is called as medium of exchange.

Ans. People keep their surplus money in banks for safety and interest which is provided by banks to them. Banks again keep only a small proportion of their cash with themselves. These days banks keep only 15% of the total deposits with them. Rest of the money banks keep to extend loans. Banks charge interest on loans which is higher than the interest on deposits. This surplus interest becomes the source of income for the banks. The 15% of cash deposits which banks keep with themselves helps to carry on with, day-to-day transactions. Like everyday, depositors come to withdraw some of their cash.

Q.14. Mention four characteristics each of the formal and informal sources of credit in India. [2011 (T-2)]

PEOPLE DEPENDING ON FORMAL SECTOR CREDIT IN URBAN AREAS

(i) Poor households share of formal credit in the urban areas is low as compared to that of rich households. Why is it so ? (ii) Mention two difficulties faced by poor households in taking loan from a formal sector.

(i) Poor households share of formal credit in urban areas is low as compared to that of rich households due to the following reasons :(a) Poor generally lack in collateral guaranters and do not have proper mode of repayment.(b) Informal sources of credit are generally flexible in timings, rate of interest, repayment schedule etc.Therefore, it is easier for poor to approach moneylenders as they know them personally.

(a) Poor are not able to satisfy general terms of credit mostly collateral guarantees.(b) Informal moneylenders know the poor borrowers personally and therefore flexible in terms of repayment schedule, amount and interest etc.

Q.16. What are the modern forms of money currency in India? Why is it accepted as a medium of exchange? How is it executed? [2008]

Ans. Modern forms of money include currency (paper notes) and coins. It is accepted as a medium of exchange because the currency is authorised by the government of India. No individual in India can legally refuse a payment made in rupee. Any person holding money can easily exchange it with any commodity or service that he desires. It acts as intermediate in the exchange process of different countries.

Q.17. Why are transactions made in money? Explain with suitable examples. [2009]

Ans. Money is accepted as a medium of exchange because the currency is authorised by the government of India. In money transactions, money can be paid for any goods or services one desires. For example : the producer of shoes may want wheat in exchange for his shoes. But he may find it difficult to find a person who is also willing to exchange his wheat for shoes. So simultaneous fulfillment of mutual wants is the first and foremost condition to buy and sell the commodity. In money transaction one can buy a commodity whenever one wants it. One does not have to wait for another person to agree to an exchange of goods.

Q.18. Study the diagram given below and answer the questions that follow : [2008] 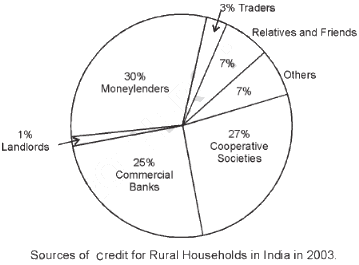 Q.19. What are the various sources of credit in rural areas? Which one of them is the most convenient source of credit? Why is it most convenient? Give two reasons. [Delhi 2008]

Ans. Various sources of credit in rural areas are :

(i) There is no need of documentation process while taking loan from informal sources (moneylenders).(ii) No collateral is required. Collateral is an asset that the borrower owns (such as land, building, livestock etc.) and uses this as a guarantee to the lender until the loan is repaid.