The document Previous Year Questions Chapter 6 - Manufacturing Industries, Class 10, SST (Geography) | EduRev Notes is a part of the Class 10 Course Social Studies (SST) Class 10.
All you need of Class 10 at this link: Class 10

Q2. Why is it important for us to improve our weaving sector instead of exporting yarn in large quantities? [2011 (T-2)]

Ans. India produces good quality of long-staple cotton (9232 lakh bales in 2004-05), still, she needs cotton from import. India exports cotton yarn. If the home weaving sector is developed it could earn many benefits through proper utilization of cotton yarn.

Ans. In India, the share of the manufacturing sector has stagnated at 17 percent of GDP – out of a total of 27 per cent for the industry. This is much lower in comparison to some East Asian economics, where it is 25 to 35 per cent. The desired growth rate over the next decade is 12 per cent per annum.

Q5. Mention any two challenges faced by the jute industry in India. State any one step taken by the government to stimulate its demand. [2011 (T-2)]

Ans. The two important challenges faced by the jute industry in India are as follows:

Q6. Mention any two factors that have contributed to the healthy growth of the automobile industry in India? Name two centers where this industry is located. [2011 (T-2)]Ans.

Q7. What are the three main reasons for shifting the sugar mills to Maharashtra in recent years? [2011 (T-2)]

Q8. What is natural gas? What are its advantages? Name one region of India where its reserves are found. [2011 (T-2)]

Q9. What are software technology parks? State any two points of significance of the Information Technology industry in India? [2011 (T-2)]

Q12. Mention any six factors responsible for the location of jute mills in the Hugli basin. [2011 (T-2)]Ans.

Q13. Why is there a tendency for the sugar mills to shift and concentrate in the southern and western states in India? Explain any three reasons. [2011 (T-2)]

Ans. Three problems faced by cotton textile industries in India are as follows:

Q17. How are agriculture and industries interdependent on each other? Explain any three points. [2011 (T-2)]

Q18. How do industries create thermal and noise pollution? Mention their consequences. [2011 (T-2)]

Q19. Distinguish between agro-based and mineral-based industries. Also, give two examples of each. [2011 (T-2)]

Ans. Iron and steel industry is called basic heavy industry because its:

Q21. “Agriculture and industry are not exclusive of each other. They move hand in hand.” Justify the statement with any three suitable arguments. [2011 (T-2)]

Q22. Why is the cotton textile industry the largest industry in India today? Give any three reasons. [2011 (T-2)]Ans.

Q23. How does industrial pollution degrade the environment? Explain with three examples. [2011 (T-2)]

Ans. Major challenges faced by the sugar industry include the seasonal nature of the industry, old inefficient methods of production; transport delay in reaching cane to factories and the need to maximise the use of baggage.

Q27. Why are most of the Iron and steel plants of India concentrated in the Chhota Nagpur plateau region? Give three reasons. [2011 (T-2)]

Ans. Chhotanagpur plateau region has the maximum concentration of steel plants because of the following factors:

Q28. Why is the fertilizer industry almost widespread throughout the country? Give three reasons. [2011 (T-2)]Ans.

Q29. Explain any three factors responsible for the location of cotton textile industry in Mumbai and Ahmedabad. [2011 (T-2)]

Ans. Factors responsible for the location of cotton textile industry in Mumbai and Ahmedabad are:

Q30. Study the table given below and answer questions that follow : 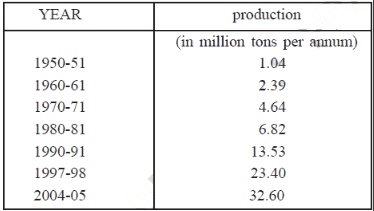 Q31. What is the meaning of the manufacturing industry? Why is it considered the backbone of economic development? Give two reasons. [2011 (T-2)]

Q33. India is an important iron and steel, producing country in the world, yet we are not able to perform to our full potential’ Give any three reasons. [2011 (T-2)]Ans.

Q34. Where was the first cement plant set up in India? Explain any two reasons for the fast expansion of cement industry in India. [2011 (T-2)]Ans.

Q35. “The economic strength of a country is measured by the development of manufacturing industries”. Elaborate on the statement. [2011 (T-2)]

Q36. Explain any three factors which are responsible for the decentralisation of the cotton industry in India. [2011 (T-2)]Ans.

Q37. Explain any three factors that affect the location of industries in a region. (2009)

Ans. Industrial locations are complex in nature. They are influenced by both physical and human factors. 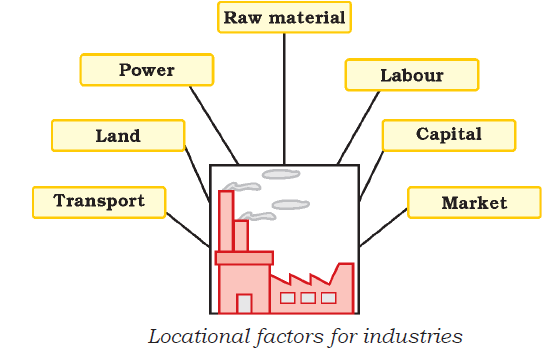 Three important factors that influence the location of industries in a region are as follows:

(i) Availability of raw material: Raw materials required for the industry must be available cheaply and at close range or at well-linked places. Incase of industries using bulky raw material like iron, bauxite, etc., the ideal location is near the raw material sources.

(ii) Power resources: Power, energy or fuel is essential for the working of any industry. They are required for running the machines and as fuel in smelters in case of mineral-based industry. So, power resources like coal and electricity must be available in abundance in the vicinity where industry is located.

(iii) Market: The goods produced must have a market for their sale. The market influences the demand as well as the type of goods produced in a region. For example, cold regions like Jammu and Kashmir will have a requirement for woollen garments. So woollen textiles will be located in that region. Consumer goods industries and automobile industries are located near big towns and cities.

Q38. How do industries pollute air and water? Explain with examples. (2009)

Ans. Pollution is a negative effect of industrialisation. It adversely affects the environment and degrades it.

Air pollution is caused by the presence of high proportion of undesirable gases, such as sulphurdioxide and cabon monoxide, dust sprays, mist and smoke in the atmosphere due to emission from industrial units. Smoke is emitted by chemical and paper factories, brick kilns, refineries and smelting plants and burning of fossil fuels in big and small factories that ignore pollution norms. These cause respiratory diseases among the people working or living in such areas. Toxic gas leaks as during the Bhopal Gas Tragedy can be hazardous with long-term ill effects. Water pollution is caused by organic and inorganic industrial wastes and effluent discharged into rivers.

The main culprits in this regard are paper, pulp, chemical textile and dyeing, petroleum= refineries, tanneries and electroplating industries. These let out dyes, detergents, acids, salts and heavy metals like lead and mercury, pesticides, fertilisers, synthetic chemicals with carbon, plastics and rubber, etc., into water bodies. They turn big and small rivers into toxic streams. Iron and steel slags are dumped into water bodies, especially rivers, destroying aquatic life and making the water unfit for use.

The pollution of the Ganga and the Yamuna are examples of water pollution caused by industries. Thermal pollution of water occurs when hot water from factories and thermal plants are, drained into rivers or other water bodies.