The document Previous Year Questions - Management of Natural Resources Class 10 Notes | EduRev is a part of the Class 10 Course Science Class 10.
All you need of Class 10 at this link: Class 10

Q.10. Why should we conserve forests ? Suggest any two ways to conserve forests. [CBSE 2008,2015,2017]Ans. Forests are biodiversity hot spots. The aim of conservation of forests is to preserve the biodiversity that we have inherited. Loss of diversity leads to ecological instability. Ways to conserve forests : (i) Silviculture — Reforest those forest lands where a large number of trees have been felled in a planned way.(ii) Help o f local people — Local people can help a lot in con serving the forests.Q.11. Management of forest and wildlife resources is a very challenging task. Why? Give any two reasons.    [CBSE 2017] Ans. Management of forest and wildlife resources is a very challenging because :(i) there are many people who have stake in these resources and may not follow rules.(ii) these resources cannot be contained in a limited area and hence cannot be guarded easily.Q.12. Explain giving example where active involvement of local people lead to efficient management of forest.    [Delhi 2016] Ans. People’s Participation in Forest Management. An Example:• The Sal forests of Midnapore district in West Bengal got reduced alarmingly in 1972.• Surveillance and policing to protect the forest resulted in frequent clash between forest officials and the villagers.• The department then changed its strategy and in Arabari forest, villagers were involved in protection of the badly damaged Sal forest.• In return, villagers were given employment and were allowed to collect firewood and fodder at nominal fee.• By 1983, the Arabari forest showed a remarkable recovery.Q.13. What was “Chipko Andolan”? How did this ‘Andolan’ ultimately benefit the local people and the environment?   [AI 2016] Ans. Chipko Andolan• During 1970, in Reni village of Garhwal, a contractor was allowed to cut trees in a forest near the village.• When the contractor’s workers went to the forest to cut trees the women of the village hug the tree trunks to prevent the workers from cutting trees.• Chipko means ‘hug’ and the movement started by the villagers by hugging trees is called the ‘Chipko Andolan’.The movement benefitted the local population by making available the forest products. It benefited the environment by conserving the quality of soil and sources of water thereby maintaining balance in nature. 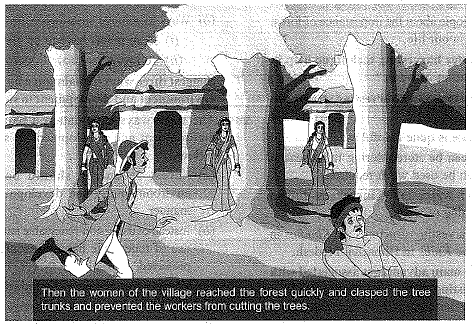 Q.14. List four advantages of properly managed watershed management.     [Delhi 2016] Ans. Four advantages of properly managed watershed management are-(a) It mitigates drought.(b) It mitigates flood.(c) It increases groundwater level.(d) It provides drinking and irrigation water.Q.15. Why are forests considered “biodiversity hot spots”? List two ways in which an individual can contribute effectively to the management of forests and wildlife.    [HOTS] [DeIhi 2015; Foreign 2012] Ans. Biodiversity is measured by the number of different life forms found in an area. In a forest, various species are available which include bacteria, fungi, ferns, plants, nematodes, insects, birds, reptiles and mammals. Forests are therefore, called “biodiversity hot spots.”An individual can contribute to the management of forest and wildlife by:
(a) avoiding cutting of forest and killing of wildlife.
(b) educating people about the importance of forest and wildlife in our life.Q.16. (a) List four measures that can be taken to conserve forests.   [Delhi 2015](b) List two problems that may arise by planting trees of a single variety over vast tracts of a forest. [Foreign 2015]Ans. (a) For measures that can be taken to conserve forest are:(i) Avoid cutting of trees.(ii) To plant trees as much as possible.(iii) To educate the people about importance of forest in our lives.(iv) To enforce law for severe punishment to anyone involved in illegal falling of trees,(b) The two problems that may arise are:(i) If a disease occurs to that variety, it may affect a vast area.(ii) Different organisms depend on different trees for food. If only one variety is planted, many organisms may not get their food.Q.17. List two main causes of the pollution of water of the river Ganga. State how pollution and contamination of river water prove harmful for the health of the people of neighbouring areas.   [AI 2015]Ans. • Largely untreated sewage such as garbage and excreta are dumped into the Ganga.• Pollution is also caused by other human activities like bathing, washing and immersion of ashes or unburnt corpses.• Industries also contribute in Ganga’s pollution by loading chemical effluents and makes the water toxic, killing aquatic organisms.Harmful effects: (a) It has made the water unfit for consumption and if consumed without treatment, it causes diarrhoea, skin disease and many other diseases in human being.(b) It causes death to aquatic animals.

Q.1. We are all familiar with the “Chipko Movement” which originated in the early 1970s in a remote village of Garhwal high up in Himalayas. This was a result of dispute between the local villagers and a greedy contractor who had been allowed to fell the trees in a forest close to the village. When contractor’s workers appeared in the forest to cut the trees, the men folk were not present, so the women folk took the lead in the movement of preventing the contractor from felling the tree. They hugged the trees and forced the contractor to withdraw.
(i) Why were the villagers against felling of trees ?
(ii) How do forests maintain ecological balance in nature ?
(iii) List two values exhibited by the “Chipko Movement”.    [CBSE 2017-18 C]
Ans. (i) The villagers were against felling of trees as they are actual stakeholders. They depend on forests for their day-to-day living, for e.g., for fruits, leaves, fire wood, medicinal plants, food for their cattle etc.
(ii) Forests are "biodiversity hotspots’ . They maintain ecological balance by providing 0 2 and CO2 for all living beings, b y maintaining water cycle and nutrient cycles, b y providing specific ecological niche to various animals etc.
(iii) Values exhibited by Chipko Movement are :
(a) Concern for maintaining one’s environment,
(b) Sense of belonging,
(c) Feeling part of unit/team and
(d) Being together in all endeavours.
(e) Appreciating and realising the significance of trees/nature in human life.

Q.2. (a) What is sustainable development ? Why is it necessary ?
(b) What is water harvesting ? List its four benefits.   [CBSE 2016-17 C]
Ans. (a) Sustainable development: Sustainable living has always been as integral part of India’s tradition and culture. ‘Vasudhaiv Kutumbakam’ which means “the entire earth is one family' reflects on philosophy that entire natural world be in harmony. Sustainable development means development in a manner so that our resources are managed in a way such that they are used by present generation, without causing any damage or harm to them and remain available for future generation as well. It encourages forms of growth that meet current basic human needs while preserving the resources for needs of future generations. It is necessary so that these resources are not damaged or depleted in a way so that future generation will not have the benefit of availability of these resources. These resources are not unlimited and human population and hence demands on these resources is increasing of a very fast rate.
It would also ensure equitable distribution of resources to all and safe disposal of the wastes too.
(b) Water harvesting involves ways to save water to capture every trickle of water by making dams or indigenous methods like digging small pits, lakes, construction of dykes, sand and limestone reservoirs, roof-top water collection units.
Its benefits are :
(i) It increase biomass production.
(ii) Mitigates droughts and floods.
(iii) Recharges groundwater levels.
(iv) Brings rivers back to life.
(v) Increases the income of watershed community i.e., people living in nearby areas.
(vi) Conserves ecological balance.

Q.3. (a) In the context of conservation of natural resources, explain the terms refuse, reduce, recycle, repurpose and reuse.
(b) Why is conservation of water necessary ? State any four reasons.    [CBSE 2016-17 C]
Ans. (a) We need to conserve natural resources, not only for future generations, but economic development is also linked with it. Hence one should practise 5 R ’s to conserve environment : Refuse, Reduce, Reuse, Repurpose and Recycle.
(i) Refuse : lb say no to things one doesn’t need
(ii) Reduce - It means that one uses less of resources. For e.g., less use of water, electricity, petrol etc.
(iii) Recycle - It means that one recycles paper, plastic, metal, glass etc., to make fresh items instead of synthesising fresh plastic, paper etc. The wastes need to be segregated and some energy used to remould these items.
(iv) Repurpose : When a product cannot be used for its original purpose, then it should be put to use for some other purpose. For example, old crockery can be used for growing plants.
(iv) Reuse - It is better than recycling because the same thing is used again and again. For e.g., jars of pickle and jams can be used for storing other things.
(b) Water is a basic necessity for all terrestrial life forms. Water is a very important resource and in fact all human civilisations started at the source of water.
Regions of water scarcity are usually associated with acute poverty. Hence, we must conserve water because :
(i) It is important for all metabolic functions in an organism.
(ii) It is required for both agriculture as well as our daily needs.
(iii) We get rainfall only during a few months of the year, hence sufficient water is not available throughout the year.
(iv) Our activities like pollution from industrial effluents and urban wastes also impact the water bodies adversely.
Hence, we must conserve water.