Q.1. “The Treaty of Versailles was humiliating on the Germans.” Give three examples in support of your answer. [CBSE 2017]

The Treaty of Versailles was humiliating to the Germans as mentioned below:

(ii) The Allied powers demilitarised Germany to weaken its power.

(v) The Allied armies also occupied the resource-rich Rhineland for much of the 1920s. 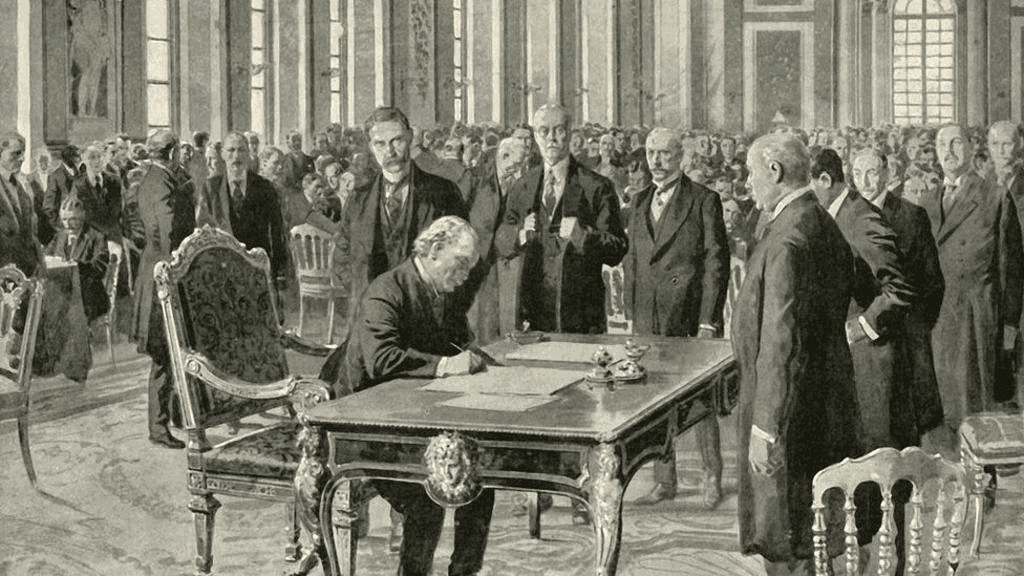 The Treaty of VersaillesQ.2. “The First World War left a deep imprint on European society and polity.” Support the statement with three examples.    [CBSE 2017]Ans.

(i) Jews too were inferior, threatening the biological purity of the superior Aryan race.

(ii) Gipsies and blacks living in Germany were considered as racial inferiors who threatened the biological purity of the 'Superior’ Aryan race.

(iii) Russians and Poles were considered subhuman, and hence undeserving of any humanity. When Germany occupied Poland and parts of Russia, captured civilians were forced to work as slave labour. Many of them died simply through hard work and starvation.

Q.4. ‘‘USA initially resisted involvement in the Second World War but was unable to stay out of the war for long.” Support the statement.    [CBSE 2017]Ans. The USA had entered the First World War in 1917 but had faced economic problems thereafter. Therefore, it did not want to join the Second World War but it could not remain out of the war for long. Japan was expanding its power in the east. It had occupied French-Indo- China and was planning attacks on US naval bases in the Pacific. Ultimately, Japan extended its support to Hitler and bombed the US base at Pearl Harbor. Under these circumstances, the US had no other option except to enter the war against Hitler and its allies.

(b) As the Allied armies overran the areas, occupied by Nazi Germany, they came across many concentration camps where people were on the last stage of their life.

(c) When the war seemed lost, the Nazi leaders distributed petrol to their subordinates to destroy all evidence available in the offices.

Q.1. Explain features of Hitler’s policy towards the Polish people under his rule.    [CBSE 2017]Ans. The main features of Hitler’s policy towards the Polish people under his rule were as mentioned below:(i) Poles were considered subhuman and hence undeserving of any humanity. Captured civilians were forced to work as slave labour.(ii) Occupied Poland was divided up. Much of north-western Poland was annexed to Germany.(iii) Poles were forced to leave their homes and properties behind to be occupied by ethnic Germans brought in from occupied Europe. Poles were then herded like cattle in the other part called the General Government, the destination of all ‘undesirables’ of the empire.(iv) Members of the Polish intelligentsia were murdered in large numbers in order to keep the entire people intellectually and spiritually servile.(v) Polish children who looked like Aryans were forcibly snatched from their mothers and examined by ‘race experts’. If they passed the race tests they were raised in German families and if not they were kept in orphanages.Q.2. Highlight the five events of 1933 that led to the destruction of democracy in Germany.    [CBSE 2016]

Explain any five features of political policy adopted by Hitler after coming to power in 1933.    [CBSE 2015]

How was democracy destroyed in Germany?Ans. The events of 1933 that led to the destruction of democracy in Germany are as follows:(a) On 30 January 1933 President Hindenburg gave the Chancellorship, the highest position in cabinet to Hitler. Hitler now tried to dismantle the structure of democratic rule.(b) A mysterious fire broke out in German Parliament which facilitated his move.(c) The Fire Decree of 27 February 1933 indefinitely suspended civil rights like freedom of speech, press, and assembly that had been granted by the Weimar republic.(d) Communists, who were the enemies of Hitler were sent to the concentration camps.(e) On 3 March, Enabling Act was passed. It established a dictatorship in Germany. Hitler could rule without the consent of the parliament. All political parties and trade unions were banned except the Nazi Party. The state had full control over the media, army, and judiciary.