Q.3. What is an echo?    [CBSE 2016]Ans: Repetition of a sound due to reflection from an object like a large building or a cliff etc. is called echo.

Q.4. Why are the walls and roof of an auditorium covered with sound-absorbent materials?     [CBSE 2016]Ans: To reduce reverberation of sound in the auditorium.

Q.5. Establish a relation between wavelength, frequency and speed of sound in a medium.    [CBSE 2016]Ans: The speed of sound is defined as the distance which a point on a wave travels in a unit time.As distance covered by wave in one time period is called the wavelength, hence

Q.6. (a) Flash and thunder are produced simult generously. However, thunder of a cloud is heard a bit late than the flash of lightning is seen. Explain why.
(b) Sound produced by thunderstorm is heard 10 s after the lightning is seen.
Calculate the approximate distance of the thunder cloud. (Given: Speed of sound in air - 340 m/s)    [CBSE 2016]
Ans: (a) In lightning process, flash and thunder are produced simultaneously. Flash is seen almost immediately because speed of light is extraordinarily large (c = 3 x 108 m s-1). But thunder is heard a few seconds later because speed of sound is much less (about 346 m s-1 at 25°C) and requires time to cover up the distance from the site of thunder in sky to us.
(b) Given that speed of sound in air v = 340 m/s and time of thunder t = 10 s
∴ Distance of the thunder cloud s = vt - 340 x 10 = 3400 m or 3.4 km

Hold one end of a slinky tightly in your right hand and the other end in your left hand so that the slinky remains straight between your two hands. Keeping your right hand fixed, move your left hand alternately pushing and pulling the slinky. It is observed that longitudinal wave has been set up in the slinky. At some places, successive turns of slinky come closer. These indicate regions of compressions (C). A t some other places, the successive turns of slinky move away from one another and spacing between the turns increases. These indicate the regions of rarefactions (R). Thus, as shown in the Figure alternate compressions and rarefactions are formed in the slinky and longitudinal wave propagates from one end of slinky to the other end.

Q.9. A girl is sitting in the middle of a park of dimensions 12 m x 12 m. On the left side of is there is a building adjoining the park and on right side of the park, there is a road adjoining the park. A sound is produced on the road by a cracker. Is it possible for the girl to hear the echo of this sound? Give reason to justify your answer. Given that speed of sound in air is 344 ms-1.    [CBSE 2016]Ans: Distance travelled by sound and its echo= Length of park

Q.12. For what does the acronym SONAR, stand?    [CBSE 2015]Ans: Sound Navigation And Ranging.Q.13. Identify the part producing sound in the following musical instruments :(a) Table(b) Mouth organ(c) Veena
Name the type of waves produced in each case.    [CBSE 2015]Ans: (a) The membrane and the enclosed air produces sound in a Tabla and longitudinal waves are produced.
(b) The air column inside a mouth organ vibrates and produces longitudinal waves to produce a sound.(c) The taut strings in Veena execute transverse vibrations and produce sound.

Q.16. Can sound travel through vacuum?    [CBSE 2015]Ans: No, sound cannot travel through vacuum.Q.17. What is SONAR? Explain with the help of labelled diagram how does it work?    [CBSE 2015]Ans: SONAR (Sound Navigation and Ranging) works on the principle of reflection of sound. Sound waves are sent into the water by SONAR device. These strike the underwater objects such as rocks, icebergs and even submarines and get reflected back. The reflected waves are detected by detector and time taken by them to return back is measured. This helps to measure depth of objects in the sea. 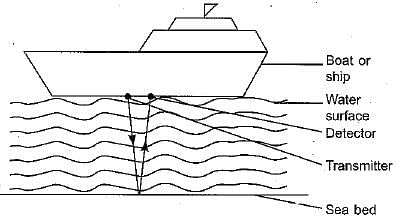 Q.1. (a) Give three medical uses of ultrasound.(b) A ship which is stationary is at a distance of 2800 m from the sea bed. This ship sends an ultrasound signal to the seabed and its echo is heard after 4 s. Find the speed of sound in water.    [CBSE 2016]
Ans: (a) Important uses of ultrasound in medical held are as follows:
(i) In an ultrasound scanner, the ultrasonic waves are used for getting images of internal organs of the body such as liver, gall bladder, kidney, uterus, etc. The technique is known as ultrasonography
(ii) Echocardiography is a medical diagnostic technique in which ultrasonic waves are used to construct the image of heart.
(iii) Powerful ultrasounds are used for treatment of kidney stones.
(b) Distance of ship from seabed d - 2800 m, time of echo t = 4 s. If speed of sound in water be v, then

Q.2. Draw labelled diagram of auditory parts of human ear explain how the human ear works.OrDraw a diagram of structure of human ear. Label any four auditory parts on it and write their functions.    [CBSE 2016]Ans: A neat labelled diagram of a human ear has been shown in the following figure. For working of ear. The outer ear called ‘pinna’ collects the sound from the surroundings. The collected sound passes through the auditory canal, at the end of which there is a thin membrane called the eardrum. When a compression of the medium reaches eardrum, the pressure on the outer side of membrane of eardrum increases and forces the eardrum inward. Similarly, at the time of rarefaction, the eardrum moves outward. Thus, eardrum begins to vibrate. Three bones of middle ear (the hammer, anvil and stirrup) amplify these vibrations. The middle ear transmits the amplified pressure variations to the inner ear. The inner ear converts the pressure variations into electrical signals. Auditory nerve then sends these electrical signals to the brain. Brain interprets them as sound. 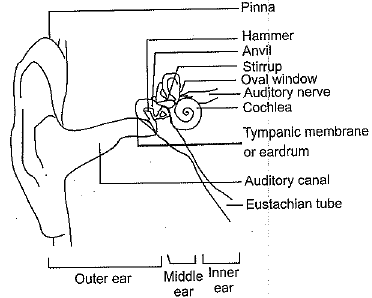 Q.3. (i) The units of certain parameters of a mechanical waves are given:Name the corresponding parameter of a mechanical wave and define each:(a) metre(b) metre per second(c) hertz(d) second(ii) Two sounds A and B are of different pitch B appears to be heavier as compared to A. What can be said about their comparative frequencies.    [CBSE 2015]
Ans: (i) (a) Wavelength: It is the distance between two consecutive compressions or rarefactions in the wave.
(b) Velocity/speed: Distance travelled by wave per unit time is called wave speed.(c) Frequency: The number of complete wave cycles occurring per unit time is called frequency of wave.
(d) Time period: The time taken by one complete wave cycle is its time period.

(ii) Since B has a heavier sound, the pitch is lower than that of A. Thus, its frequency is less than that at A.

(a) Which of the two waves corresponds to high pitched sound?(b) Name the characteristics of sound the graphs represent.(c) Define the characteristic.(d) Explain the reason why sound of school bell is heard over long distance while that of a blow by hand on a wooden desk remains limited to room. [CBSE 2015]Ans: (a) None corresponds to high pitched sound as frequency is less.(b) The graphs represent amplitude, wavelength, time period and frequency of sound.(c) Wavelength - The distance between two points in consecutive waves having the same phase is called wavelength.Frequency - The number of complete oscillations in one second is called frequency.Time period - Timetakenforonecomplete oscillation to occur is called time period.Amplitude - Maximum displacement of an oscillating particle from the mean position is called amplitude.Q.5. What is an echo? State two conditions for an echo to be heard. Bats cannot see, then how do they catch their prey? Explain. [CBSE 2015]Ans: Reflected sound is called echo.(i) Reflecting surface should be at a distance such that echo reaches our ears after a time lag of at least 0.1 seconds.(ii) Reflecting surface should not absorb the sound and must reflect sound properly.
Bats send ultrasonic squeaks which are reflected back when they strike prey. The bats detect this reflected wave and catch their prey.

Q.6. (a) Write full form of SONAR. Explain how it can be used to determine the depth of the sea.
(b) Briefly explain two other applications of ultrasound. [CBSE 2015]
Ans: (a) SONAR means Sound Navigation and Ranging. For its working and use, SONAR system consists of a transmitter and a detector and is installed on a ship or motorboat. The transmitter produces and transmits ultrasonic waves. These waves travel through water and strike the object beneath on the sea bed. The object reflects these waves and the reflected waves are sensed by the detector. The detector converts the ultrasonic waves into electrical signals. If d be the depth of the said object and v the velocity of ultrasonic waves in water, then time interval between transmission and reception of ultrasonic waves will be

By knowing the time t we can find the value of d.
SONAR technique is used to determine the depth of the sea and to locate underwater hills, valleys, submarine, iceberg, sunken ship etc.
(b) For two other applications of ultrasound, For frequency, see point number 15 under the heading “Chapter At A Glance”.
For wavelength, see point number 16 under the heading “Chapter At A Glance”.
Echo is the phenomenon due to which a person listens repeated sound on account of reflection of the sound from some distantly situated reflector.
Ultrasonic sound is used for different purposes. Some important applications are :
(i) Ultrasonography technique is used by doctors to get images of internal organs of the human body.
(ii) Ultrasounds can be used to detect cracks and flaws in metal blocks.
(iii) Ultrasound is used to clean parts located in hard to reach places.
SONAR is a device that uses ultrasound waves to measure the distance, direction and speed of underwater objects.

The document Previous Year Questions - Sound Notes | Study Science Class 9 - Class 9 is a part of the Class 9 Course Science Class 9.
All you need of Class 9 at this link: Class 9
Join Course