The document Previous Year Questions: Structural Organisation in Animals (2016-20) NEET Notes | EduRev is a part of the NEET Course Biology Class 11.
All you need of NEET at this link: NEET 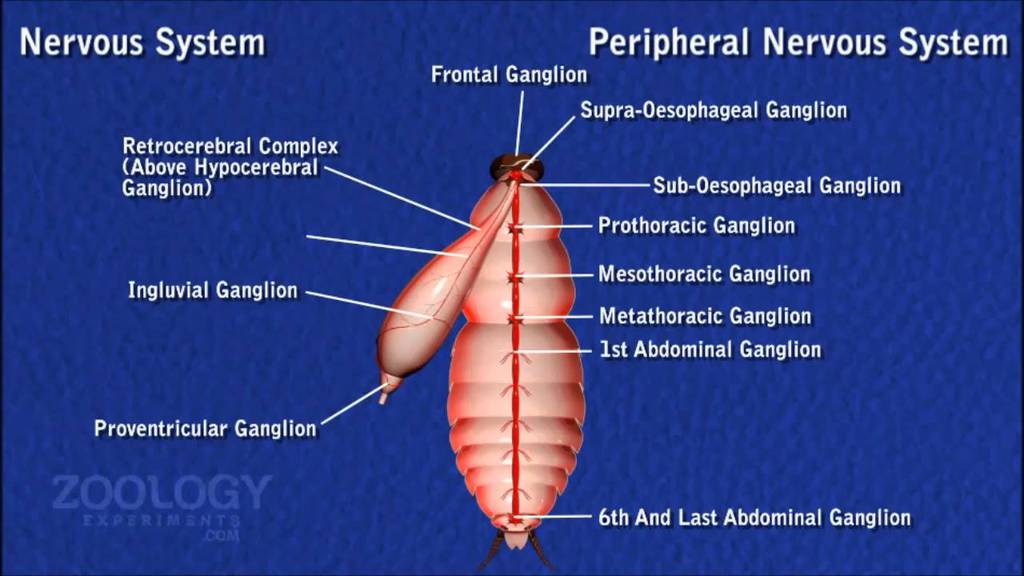 Ans. (c)Q.6. Which of the following features is used to identify a male cockroach from a female cockroach?    (2018)(a) Presence of a boat-shaped sternum on the 9th abdominal segment.(b) Presence of caudal styles(c) Forewings with darker tegmina(d) Presence of anal cerciAns. (b)Solution.Male cockroach bears a pair of short thread-like anal/caudal styles which are absent in females. They project backwardly from the sides of 9th abdominal segment in male cockroach.Q.7. Select the correct route for the passage of sperms in male frogs.    (2017)(a) Testes → Vasa of Terentia → Kidney → Seminal vesicle → Urinogenital duct → Cloaca(b) Testes → Vasa of Terentia → Bidder’s canal → Ureter → Cloaca(c) Testes → Vasa of Terentia → Kidney → Bidder’s canal → Urinogenital duct → Cloaca(d) Testes → Bidder’s canal → Kidney → Vasa efferentia → Urinogenital duct → CloacaAns. (c)Solution.The correct route for transport of sperms in male frog isTestes → Vasa efferentia → Kidney → Bidder’s canal → Urinogenital duct → Cloaca.Q.8. Frog’s heart when taken out of the body continues to beat for some time.Select the best option from the following statements.    (2017)(1) Frog is a poikilotherm.(2) Frog does not have any coronary circulation.(3) Heart is “myogenic” in nature.(4) Fleart is autoexcitable.(a) Only (4)(b) (1) and (2)(c) (3) and (4)(d) Only (3)Ans. (c)Solution.Frog’s heart is myogenic, i.e., heartbeat originates from muscles of heart. Hence, it is autorythmic. Wave of contraction originates from sinus venosus and spreads to wall of sinus venosus and both auricles. This compels the heart to beat. Due to this reason, frog’s heart will continue to beat as long as it gets supply of ATP.Q.9. In male cockroaches, sperms are stored in which part of the reproductive system?    (2016)(a) Seminal vesicles(b) Mushroom glands(c) Testes(d) Vas deferensAns. (a)Solution.Seminal vesicles are numerous small sacs present on ventral surface of anterior part of the ejaculatory duct which store sperms.Q.10. Smooth muscles are    (2016)(a) Involuntary, Fusiform, Non-striated(b) Voluntary, Multinucleate, Cylindrical(c) Involuntary, Cylindrical, Striated(d) Voluntary, Spindle-shaped, Uninucleate.Ans. (a)Solution.Smooth muscle fibres are elongated and spindle shaped (fusiform). Each fibre contains a single oval nucleus surrounded by cytoplasm (sareoplasm). In eytoplasm, myofibrils are arranged longitudinally. These fibres lack striations and sarcolemma. However, are enclosed by plasma membrane.Q.11. Which type of tissue correctly matches with its location?    (2016)

Ans. (c)Solution.Tip of nose has elastic cartilage. Simple columnar epithelium lines the stomach. Tendon is white fibrous connective tissue. Posterior part of intestine has single unit smooth muscle in which all fibres of muscle contract simultaneously as single unit.Q.12. Which of the following features is not present in Periplaneta americana?    (2016)(a) Exoskeleton composed of N-acetylglucos- amine(b) Metamcrically segmented body(c) Schizocoelom as body cavity(d) Indeterminate and radial cleavage during embryonic developmentAns. (d)Solution.In insect, cleavage is superficial.