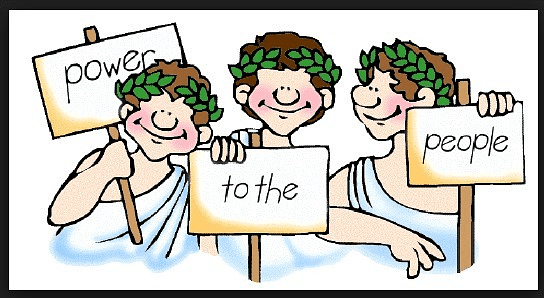 Q.2. Democracy allows people to correct their mistakes. How is this possible?     [CBSE 2017]Ans. Mistakes may be made in a democracy. No form of government can guarantee that. But in a democracy, there is an advantage that such mistakes cannot be hidden for long. There is a space for public discussion of these mistakes so there is room for correction too. Either the rulers have to change their decisions, or the rulers can be changed. This cannot happen in a non-democratic government. Thus, we can say that on this count the democracy is better than other governments.Q.3. What is a referendum?     [CBSE 2016]Ans. A referendum is a direct vote in which the entire electorate is asked to either accept or reject a particular proposal. It may be the adoption of a new constitution, a law or a specific governmental policy.Q.4. Explain with an example of how popular governments can be undemocratic and popular leader can be autocratic.Or ZANU-PF wins the elections every five years in Zimbabwe. Are the leaders of ZANU-PF close to the values of democracy? Explain.    [CBSE 2016]Ans. Since its independence in 1980, Zimbabwe has been ruled by ZANU-PF and Robert Mugabe as its leader. The leaders of ZANU-PF were not close to the values of democracy in the following ways:(a) Elections have been held regularly and always won by ZANU-PF. President Mugabe is popular but also uses unfair practices in elections.(b) Over the years his government has changed the constitution several times to make the President more powerful and less accountable.(c) Opposition party workers are harassed and their meetings disrupted. Public protests and demonstrations against the government are declared illegal.(d) Television and radio are controlled by the government and give only the government’s version.Q.5. What according to you is the broader meaning of democracy?Or What do you understand by She “broader meaning of democracy”? Exp Jain in three points.     [CBSE 2016] Ans. (a) Democracy is a form of government in which people’s representatives sit together to make decisions.(b) Elections are held to choose the representatives and native people or citizens are allowed to participate in the elections.(c) Democracy, as a principle, can be applied to any sphere of life. In a true democracy, no one goes to bed hungry or denied equal information, basic education and equal resources.Q.6. After how many years does Mexico hold elections for electing the President?     [CBSE 2016]Ans. Since its independence in 1930, Mexico holds elections after every six years for electing the President.Q.7. In which country women do not have the right to vote until 2015?Or Who does not have the right to vote in Saudi Arabia?    [CBSE 2016] Ans. Until 2015, women do not have the right to vote in Saudi Arabia.Q.8. Who was the President of Zimbabwe since independence?Or Robert Mugabe is the president of which country?    [CBSE 2015] Ans. The President of Zimbabwe was Robert Mugabe.

Q.9. The media is not independent in Zimbabwe. How?

Ans. Television and radio are controlled by the government and give only the ruling party’s version. There are independent newspapers, but the government harasses those journalists who went against it.

Q.10. How can you say that China is not a democratic country?

Ans. In China, the elections do not offer the people any serious choice. They must choose the ruling party and the candidates approved by it. That is why we cannot say that China is a democratic country.

Q.11. How does democracy improve the quality of decision making?

Ans. Democracy is based on consultation and discussion. A democratic decision always involves many persons, discussions and meetings. When a number of people put their heads together, they are able to point out possible mistakes in any decision. This takes time. But there is a big advantage in taking time over important decisions. This reduces the chances of rash or irresponsible decisions. Thus, democracy improves the quality of decision-making.

Q.12. How does democracy enhances the dignity of citizens?

Ans. Even if democracy does not bring about better decisions and accountable government, it is still better than other forms of government. Democracy enhances the dignity of citizens. Democracy is based on the principle of political equality, on recognising that the poorest and the least educated has the same status as the rich and the educated. People are not subjects of a ruler, they are the rulers themselves. Even when they make mistakes, they are responsible for their conduct.

Q.13. How is democracy better than other forms of government?

Q.14.  Democracy cannot get us everything and is not the solution to all problems.Then why are we interested in democracy?

Q.15.  What does ‘one person, one vote, one value’ mean? Name the countries that deny the equal right to vote.

Democracy is based on a fundamental principle of political equality. In a democracy, each adult citizen must have one vote and each vote must have one value. Democracy is linked to the demand for Universal Adult Franchise. Yet, there are many instances of denial of equal right to vote.