Q.1. Write the equation for the dissociation of hydrochloric acid (HCl) in water. Ans. HCl + H2O → H3O+ + Cl-or it can also be written asHCl

H+(aq) + Cl-(aq)Q.2. Which one of these has a higher concentration of H+ ions? 1M HCl or 1M CH3COOH Ans. 1M HCl will have a higher concentration of H+ ions because HCl being strong acid undergoes complete dissociation.Q.3. While diluting an acid why is it recommended that the acid should be added to water and not water to the acid?Or Why should water be never added dropwise to concentrated sulphuric acid?Ans. 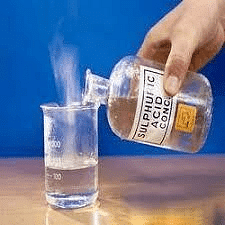 Fresh milk has a pH of 6. When it changes into curd (yogurt) will its pH value increase or decrease? Why?  Ans. The pH will decrease from 6 because it becomes more acidic when milk is converted into curd and more acidic solutions have lower pH value. 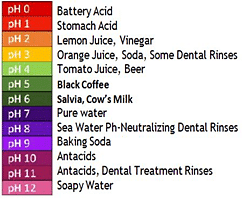 State the chemical difference between Plaster of Paris and gypsum. Describe their either-way interconversions. 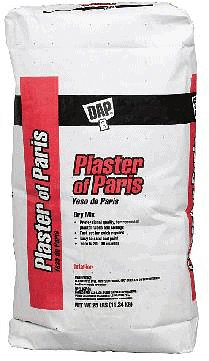 When Plaster of Paris is mixed with water, it gets converted into gypsum.

The plaster of Paris is used for making statues and for setting fractured bones.Q.25. Name three compounds of calcium that are used in day-to-day life and write one important use of each of them. Ans. The three compounds of calcium and their uses are :(i) Slaked lime [Calcium hydroxide, Ca(OH)2] used for the manufacture of bleaching powder.(ii) Bleaching powder [Calcium oxychloride, CaOCl2] used as a bleaching agent in the laundry. (iii) Plaster of Paris [Calcium sulfate hemihydrate, CaSO4. 1/2H2O] used to plaster the fractured bones.

Q.26. A chemical compound having the smell of chlorine is used to remove the yellowness of white clothes in the laundries. Name the compound and write the chemical equation involved in its preparation.Ans. The compound is bleaching powder (CaOCl2). It removes yellowness from clothes due to its bleaching action. For details, consult the text part.Q.27. Explain giving reasons: (i) Tartaric acid is a component of baking powder used in making cakes.(ii) Gypsum, CaSO4.2H2O is used in the manufacture of cement.Ans. (i) Role of tartaric acid in baking powder (mixture of tartaric acid and sodium hydrogen carbonate) is to neutralise sodium carbonate formed upon heating sodium hydrogen carbonate.

Sodium hydrogen carbonate Sodium carbonate (ii) The role of gypsum (CaSO4.2H2O) in the manufacture of cement is to slow down the process of setting of cement.Q.28. How is chloride of lime chemically different from calcium chloride? Why does chloride of lime gradually lose its chlorine when kept exposed to air? Ans. Chloride of lime is calcium oxychloride [(Ca(OCl)Cl] also known as bleaching powder. Calcium chloride is CaCl2. Bleaching powder gives identific smell of chlorine when exposed t air because it reacts with CO2 and chlorine gas is evolved.

Q.29. What is the chemical name of washing soda? Name three raw materials used in making washing soda by Solvay process.Ans. Chemical name: Sodium carbonate decahydrate (Na2CO3.10 H2O).Raw materials: Brine, limestone, ammonia.Q.30. State the chemical property in each case on which the following uses of baking soda are based (i) as an antacid. (ii) as a constituent of baking powder. Ans.(i) It is weakly alkaline in nature and neutralizes acid (HCl) formed in the stomach.NaHCO3 + HCl  → NaCl + H2O + CO2(ii) It evolves CO2 in the form of bubbles when cake is made by baking. As a result, the cake becomes porous as well as fluffy.

For further details, consult the text part.Q.32. (a) What is the action of red litmus on (i) dry ammonia gas (ii) solution of ammonia gas in water(b) State the observations you would make on adding ammonium hydroxide to an aqueous solution of(i) ferrous sulfate (ii) aluminum chloride.Ans. (a) (i) Red litmus has no action on dry ammonia gas because it does not release any hydroxyl ions (OH-)(ii) When passed through water, ammonia (NH3) is converted to ammonium hydroxide (NH4OH). It dissociates to give hydroxyl ions (OH-) and the solution is basic in nature. Red litmus acquires a blue color.(b) (i) A green precipitate of ferrous hydroxide will be formed by double decomposition reaction.

(ii) A white precipitate of aluminium hydroxide will be formed by double decomposition reaction.

Q.33. Name the gas that evolved when dilute HCl reacts with sodium hydrogen carbonate. How is it recognised?Ans. The gas that evolved is carbon dioxide (CO2). When the gas is bubbled through lime water, it becomes milky due to the formation of CaCO3.Q.34. (a) Name the two chief chemicals used for making a soda acid fire extinguisher. (b) How does the soda-acid fire extinguisher help to extinguish the fire? Ans. (a) The two chief chemicals are sodium hydrogen carbonate (NaHCO3) and sulphuric acid (H2SO4) (b) For the details of the operation, consult the text part.Q.35. How will you test for the gas which is liberated when hydrochloric acid reacts with an active metal?Ans. Hydrogen gas is evolved when hydrochloric acid reacts with an active metal such as sodium, potassium,Mg(s) + 2HCl(aq) → MgCl2(aq) + H2(g)calcium or magnesium. In order to test the gas, bring either a burning match stick or candle near the gas. The gas will immediately catch fire and burns with a ‘pop’ sound.Q.36. An aqueous solution has a pH value of 7.0. Is this solution acidic, basic, or neutral? Ans. The solution with a pH value of 7.0 is neutral in natureQ.37. Out of calcium compounds calcium carbonate, quick lime, and slaked lime, which one can be used for removing moisture from ammonia gas and why?Ans. Quick lime (CaO) can be used to remove moisture from ammonia gas because of its hygroscopic nature. Therefore, it can act as the best dehydrating agent for ammonia.