The fiscal or budgetary operations of the state have manifold effects on the economy. The revenue collected by the state through taxation and the dispersal of public expenditures can have significant influence on the consumption, production and distribution of the national income of the country.

The fiscal operations of the government resolve themselves into a series of transfers of purchasing power from one section of the community to another, along with the variations in the total incomes available in the community. In fact, the fiscal activities of the state affect the allocation of resources, the use of resources from one channel to another, hence, the level of income, output and employment.

Hence, it is desirable that some standard or criterion should be laid down to judge the appropriateness of a particular operation of public finance — the government’s revenue and expenditures. In a modern welfare state, such a criterion can obviously be nothing else but the economic welfare of the people.

It follows, thus, that the particular financial activity of the state which leads to an increase in economic welfare is considered as desirable. It may be considered as undesirable if such an activity does not cause an increase in the welfare or even sometimes, it may be the cause of a reduction in the general economic welfare. The guiding principle of state policy has been technically desirable as the Principle of Maximum Social Advantage by Hugh Dalton.

As such, the maximum social advantage is achieved when the state in its financial activities maximise the surplus of social gain or utility (resulting from public expenditure) over the social sacrifice or disutility (involved in payment of taxes.) The principle of public finance, thus, requires the state to compare the sacrifice and benefits of the society in its fiscal operations.

Thus, a rational state seeks to maximise the net social advantage of its fiscal operations. The social net advantage is maximum when the aggregate social benefits resulting from public expenditure is maximum and the aggregate social sacrifice involved in raising the public revenue is minimum. According to the principle of maximum social advantage, thus, the public expenditure should be carried on up to the marginal social sacrifice of the last unit of rupee taxed.

The equilibrium point of maximum social advantage may as well be illustrated by means of a diagram, as in Fig. 1. 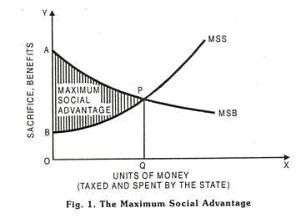 In Fig. 1, MSS is the marginal social sacrifice curve. It is an upward sloping curve implying that the social sacrifice per unit of taxation goes on increasing with every additional unit of money raised. MSB is the marginal social benefit curve. It is a downward sloping curve implying that the social benefits per unit diminishes as the public expenditure increases.

The curves MSS and MSB intersect at point P. This equality (P) of MSS and MSB curves is regarded as the optimum limit of the state’s financial activity. It is easy to see that so long as the MSB curve lies above the MSS curve, each additional unit of revenue raised and spent by the state leads to an increase in the net social advantage.

Further, the ideal of maximum social advantage is attained by the state, if the following principles of financial operation are followed in the budget.

1. Taxes should be distributed in such a way that the marginal utility of money sacrificed by all the tax-payers is the same.

2. Public spending is done, such that benefits derived from the last unit of money spent on each item becomes equal.

3. Marginal benefits and sacrifices must be equated.

To sum up, all fiscal operations, both as regards revenue and expenditure, should be treated as a series of transfer of purchasing power that must ultimately increase the economic welfare of the people. In this context, Dalton enunciated the principle of maximum social advantage and asserted that financial operations of the government must be in accordance with this principle in a welfare state.