Principle of Moments or Varignon’s Theorem

Varignon’s Theorem states that the moment of a force about any point is equal to the algebraic sum of the moments of its components about that point.

Principal of moments states that the moment of the resultant of a number of forces about any point is equal to the algebraic sum of the moments of all the forces of the system about the same point. 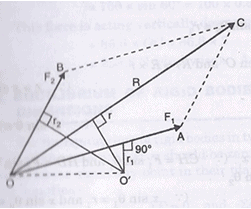 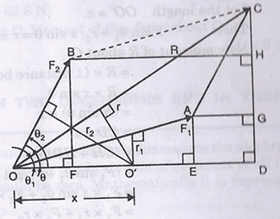 Fig2.34 (a) shows two forces Fj and F2 acting at point O. These forces are represented in magnitude and direction by OA and OB. Their resultant R is represented in magnitude and direction by OC which is the diagonal of parallelogram OACB. Let O’ is the point in the plane about which moments of F1, F2and Rare to be determined. From point O’, draw perpendiculars on OA, OC and OB.

Then according to Varignon’s principle;

Moment of R about O’ must be equal to algebraic sum of moments of F1 and F2about O’.

Now moment of R about O’

Hence moment of R about any point in the algebraic sum of moments of its components i.e., F1and F2)about the same point. Hence Varignon’s principle is proved.