PRODUCTION FUNCTIONThe production function is a statement of the relationship between a firm’s scarce resources (i.e. its inputs) and the output that results from the use of these resources. More specically, it states technological relationship between inputs and output. The production function can be algebraically expressed in the form of an equation in which the output is the dependent variable and inputs are the independent variables. The equation can be expressed as:Q = f (a, b, c, d …….n)Where ‘Q’ stands for the rate of output of given commodity and a, b, c, d…….n, are the different factors (inputs) and services used per unit of time.Assumptions of Production Function: There are three main assumptions underlying any production function.First we assume that the relationship between inputs and outputs exists for a specific period of time. In other words, Q is not a measure of accumulated output over time.Second, it is assumed that there is a given “state-of-the-art” in the production technology. Any innovation would cause change in the relationship between the given inputs and their output. For example, use of robotics in manufacturing or a more efficient software package for financial analysis would change the input-output relationship.Third assumption is that whatever input combinations are included in a particular function, the output resulting from their utilization is at the maximum level.The production function can be defined as:The relationship between the maximum amount of output that can be produced and the input required to make that output. It is defined for a given state of technology i.e., the maximum amount of output that can be produced with given quantities of inputs under a given state of technical knowledge. (Samuelson) It can also be defined as the minimum quantities of various inputs that are required to yield a given quantity of output.The output takes the form of volume of goods or services and the inputs are the different factors of production i.e., land, labour, capital and enterprise. To illustrate, for a company which produces beverages, the inputs could be fixed assets such as plant and machinery; raw materials such as carbonated water, sweeteners and favourings and labour such as assembly line workers, support-staff and supervisory personnel.For the purpose of analysis, the whole array of inputs in the production function can be reduced to two; L and K. Restating the equation given above, we get:Q = f (L, K).Where Q = OutputL= LabourK= Capital

The Law of Variable Proportions or The Law of Diminishing Returns: In the short run, the input output relations are studied with one variable input (labour) with all other inputs held constant. The laws of production under these conditions are known under various names as the law of variable proportions (as the behaviour of output is studied by changing the proportion in which inputs are combined) the law of returns to a variable input (as any change in output is taken as resulting from the additional variable input) or the law of diminishing returns (as returns eventually diminish).The law states that as we increase the quantity of one input which is combined with other fixed inputs, the marginal physical productivity of the variable input must eventually decline. In other words, an increase in some inputs relative to other fixed inputs will, in a given state of technology, cause output to increase; but after a point, the extra output resulting from the same addition of extra input will become less and less.Before discussing this law, if would be appropriate to understand the meaning of total product, average product and marginal product.Total Product (TP): Total product is the total output resulting from the efforts of all the factors of production combined together at any time. If the inputs of all but one factor are held constant, the total product will vary with the quantity used of the variable factor. Column (1) of Table 1 presents the quantity of variable factor (labour) used along with the factors whose quantity is held constant and column (2) represent the total product at various levels of use of the variable input.Table 1: Product Schedule

It is shown as a schedule in column (3) of Table 1. When one unit of labour is employed, average product is 100, when two units of labour are employed, average product rises to 105. This goes on, as shown in Table 1.Marginal Product (MP): Marginal product is the change in total product per unit change in the quantity of variable factor. In other words, it is the addition made to the total production by an additional unit of input.Symbolically,MPn = TPn – TPn-1The computed value of the marginal product appears in the last column of Table 1. For example, the MP corresponding to 4 units is given as 110 units. This reflects the fact that an increase in labour from 3 to 4 units, has increased output from 330 to 440 units. 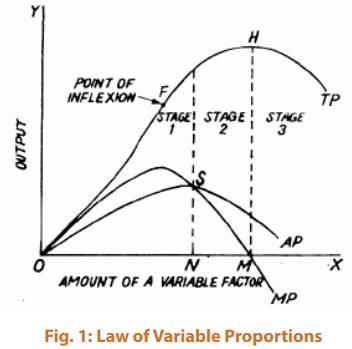