Subjective Questions (Level 1)Projectile Motion from Ground to GroundQues 1: A particle is projected from ground with initial velocity u = 20√2 m/s at θ = 45°.Find: 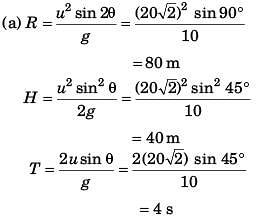 (c) ∴ Velocity of particle at the time of collision with ground.

Ques 2: In the figures shown, three particles are thrown from a tower of height 40 m as shown in figure. In each case find the time when the particles strike the ground and the distance of this point from foot of tower. 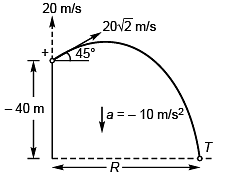 Ques 4: The coach throws a baseball to a player with an initial speed of 20 m/s at an angle of 45° with the horizontal. At the moment the ball is thrown, the player is 50 m from the coach. At what speed and in what direction must the player run to catch the ball at the same height at which it was released? (g = 10 m/s2)Ans:

Substituting above value of

Ques 7: A ball is shot from the ground into the air. At a height of 9.1 m, its velocity is observed to be

in metre per second

Give the approximate answers. (a) To what maximum height does the ball rise? (b) What total horizontal distance does the ball travel?
What are: (c) the magnitude and (d) the direction of the ball’s velocity just before it hits the ground?Ans: (a) 11 m(b) 23 m(c) 16.6 ms-1 (d) tan-1 (2) below horizontalSol: 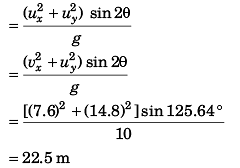 (c) Magnitude of velocity just before the ball hits ground

Ques 8: Two particles move in a uniform gravitational field with an acceleration g. At the initial moment the particles were located over a tower at one point and moved with velocities = 3 m/s v1 and v2 = 4 m/s horizontally in opposite directions. Find the distance between the particles at the moment when their velocity vectors become mutually perpendicular.Ans: 2.5 mSol: As initial vertical velocities of both particles will be zero and both fall under same acceleration (g), at anytime t, the vertical displacement of both will be same

Distance between A and B

Ques 9: A ball is thrown from the ground to clear a wall 3 m high at a distance of 6 m and falls 18m away from the wall. Find the angle of projection of ball.Ans: 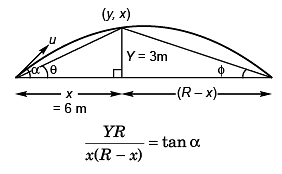 Ques 10: A particle is projected with velocity

so that it just clears two walls of equal height h which are at a distance of 2h from each other. Show that the time of passing between the walls is

[Hint: First find velocity at height h. Treat it as initial velocity and 2h as the range.]Sol: On the trajectory there be two points P and Q at height h from ground. 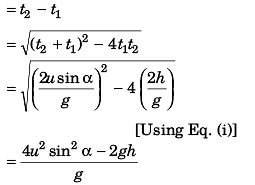 (Proved)Ques 11: A particle is projected at an angle of elevation α and after t second it appears to have an elevation of β as seen from the point of projection. Find the initial velocity of projection.Ans:

(Proved.)Ques 13: Two particles are simultaneously thrown in horizontal direction from two points on a riverbank, which are at certain height above the water surface. The initial velocities of the particles are v1=5 m/s and v2 = 7.5 m/s respectively. Both particles fall into the water at the same time. First particle enters the water at a point s = 10m from the bank. Determine: (a) the time of flight of the two particles, (b) the height from which they are thrown, (c) the point where the second particle falls in water.Ans: (a) 2 s (b) 19.6 m (c) 15 mSol: 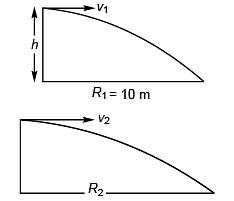 Ques 14: A balloon is ascending at the rate v = 12 km/h and is being carried horizontally by the wind at vw = 20 km/h. If a ballast bag is dropped from the balloon at the instant h = 50 m, determine the time needed for it to strike the ground. Assume that the bag was released from the balloon with the same velocity as the balloon. Also, find the speed with which bag the strikes the ground?Ans: 3.55 s, 32.0 m/sSol: Vertical velocity of balloon (+ bag)

Bag is released at point A.Let t be time, the bag takes from A to reach ground.

= 3.37 sVertical velocity of bag when it strikes ground

∴ Velocity of bag with which it strikes ground