The document Projectile Motion JEE Main(Part - 3) - Physics, Solution by DC Pandey NEET Notes | EduRev is a part of the NEET Course DC Pandey (Questions & Solutions) of Physics: NEET.
All you need of NEET at this link: NEET

and a constant force

acts on it. The path of the particle is
(a) straight line
(b) parabolic
(c) circular
(d) ellipticalAns: circularSol:

Ques 5: A gun is firing bullets with velocity v0 by rotating through 360° in the horizontal plane. The maximum area covered by the bullets is

Sol: Equation to trajectory is 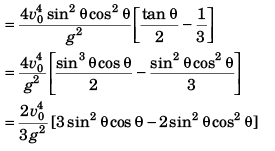 ∴ Option (b) is correct.

Ques 8: If T1 and T2 are the times of flight for two complementary angles, then the range of projectile R is given by

Ques 10: Average velocity of a particle in projectile motion between its starting point and the highest point of its trajectory is (projection speed = u, angle of projection from horizontal = θ)
(a) u cos θ 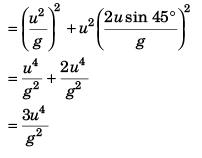 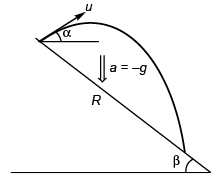