A pronoun is a word that can be substituted for a noun, noun phrase or for other pronouns without changing the meaning of the sentence.

Personal pronouns are used to replace a person, people or animals. 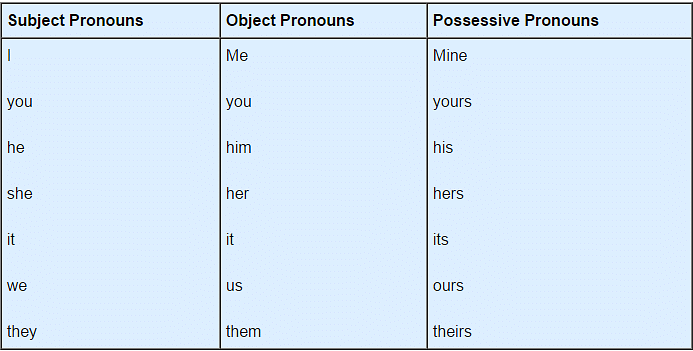 Me, you, him, her, it, us, them. They are always the object of the verb, preposition, or infinitive. To whom / what the action is being done to.

Mine, yours, his, hers, its, ours, theirs. They show ownership, answering the question "Whose?"

-Be careful to choose the right pronoun when making comparison.

You can avoid misunderstandings by writing:

Reflexive pronouns also known as mirror pronouns reflect the action of the verb back at the subject.

Myself, yourself, himself, herself, itself, ourselves, yourselves, themselves.

Use the right mirror pronoun to match the subject:

He hit himself with the slingshot.
They rescued themselves by selling their house.


Reflexive pronouns may be used to emphasis.

He himself finished all that work. (it's significant)
I myself couldn't believe what you said. (Again there is emphasis)


"By" + reflexive pronoun = alone, without help

My sister lives by herself. (on her own / alone).
I prepared the dinner by myself (alone).
I solved the puzzle all by myself. (emphasized)

Did you enjoy yourself at the party? (Did you have fun?)
Please help yourself to some food. ( Go and get whatever you want)

The gym was very crowded today.
The gym is closed tomorrow.

The gym, which was very crowded today, is closed tomorrow.

Sam wondered who was ringing her doorbell.
(who is the subject of was ringing)

Sam was not sure whom he could trust with her secret.
(Sam is the subject of trust; whom is the object of trust)


Note: It is safe to use who if the sentence begins with the pronoun.

More Examples on Which vs That

Animals that have four legs can learn to hop quickly.
(Limiting the focus on animals with four legs only)

Animals, which breath the same air as us, have existed on Earth for many hundreds of millions of years.

Note: The pronoun "who" is preferred in some cases for the above sentences:

Animals, who breath the same air as us, have existed on Earth for many hundreds of millions of years.

Similar to "who" and "whom" except in an indefinite way:


Warning: A pronoun replaces a noun, or else it is an adjective.