Before calculating the propagation delay of CMOS Inverter, we will define some basic terms- 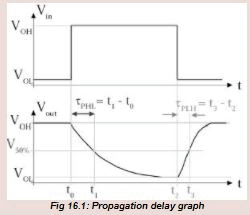 The propagation delay tp of a gate defines how quickly it responds to a change at its inputs, it expresses the delay experienced by a signal when passing through a gate. It is measured between the 50% transition points of the input and output waveforms as shown in the figure 16.1 for an inverting gate. The

defines the response time of the gate for a low to high output transition, while

refers to a high to low transition. The propagation delay

as the average of the two

We will give an example of how to calculate quick estimate. From ffig 16.22, we can write following equations.. 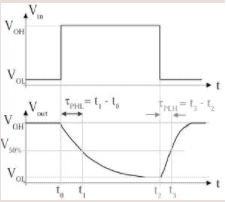 The capacitor current is -

From this the delay times can be derived as

The expressions for the propagation delays as denoted in the figure (16.22) can be easily seen to be

Figure 16.21 shows the familiar CMOS inverter with a capacity load CL that represents the load capacitance (input of next gates, output of this gate and routing). Of interest is the voltage waveform Vout(t) when the input is driven by a step waveform, Vin(t)as shown in figure 16.22 .

Figure 16.31 shows the trajectory of the n-transistor operating point as the input voltage, Vin(t), changes from 0V to VDD. Initially, the end-device is cutt-off and the load capacitor is charged to VDD. This illustrated by X1 on the characteristic curve. Application of a step voltage (VGS = VDD) at the input of the inverter changes the operating point to X2. From there onwards the trajectory moves on the VGS = VDD characteristic curve towards point X3 at the origin.

Thus it is evident that the fall time consists of two intervals;

As we saw in last section, the delay periods can be derived using the general equation

When the n-device begins to operate in the linear region, the

discharge current is no longer constant. The time tf1 taken to discharge the capacitor voltage from (VDD-Vtn) to 0.1VDD can be obtained as before. In linear region,

Thus the complete term for the fall time is,

The fall time tf can be approximated as,

From this expression we can see that the delay is directly proportional to the load capacitance. Thus to achieve high speed circuits one has to minimize the load capacitance seen by a gate. Secondly it is inversely proportion to the supply voltage i.e. as the supply voltage is raised the delay time is reduced. Finally, the delay is proportional to the βn of the driving transistor so increasing the width of a transistor decreases the delay.

Due to the symmetry of the CMOS circuit the rise time can be similarly obtained as;

Thus the fall time is faster than the rise time primarily due to different carrier mobilites associated with the p and n devices thus if we want tf=tr we need to make βn/βp =1. This implies that the channel width for the p-device must be increased to approximately 2 to 3 times that of the n-device.

The propagation delays if calculated as indicated before turn out to be, If we consider the rise time and fall time of the input signal as well, as shown in the fig 16.35 we have,

These are the rms values for the propagation delays.