Stress and Strain is the first topic in Strength of Materials which consist of various types of stresses, strains and different properties of materials which are important while working on them.

When a material is subjected to an external force, a resisting force is set up in the component. The internal resistance force per unit area acting on a material is called the stress at a point. It is a tensor quantity having unit of N/m2 or Pascal.Stress = Force/AreaForce(F) is expressed in Newton (N) and A, original area, in square meters (m2), the stress σ will be expresses in N/m2. This unit is called Pascal (Pa).

It is the deformation produced in the material due to simple stress. It usually represents the displacement between particles in the body relative to a reference length. 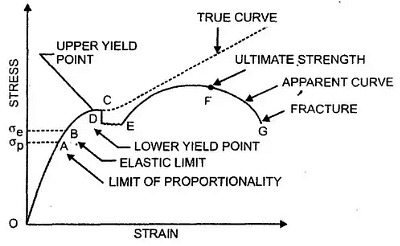 Where K is the strength coefficient

A prismatic bar loaded in tension by an axial force P

For a prismatic bar loaded in tension by an axial force P. The elongation of the bar can be determined as δ=PL/AE